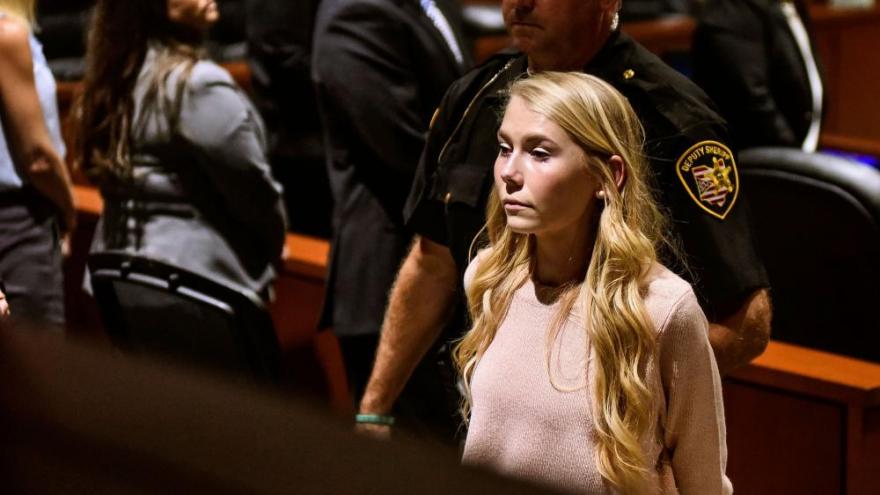 Brooke Skylar Richardson is escorted out of the courtroom after the verdict in her trial in Lebanon, Ohio.

(CNN) -- An Ohio woman who was found guilty of abuse of a corpse in connection with the death of her newborn daughter was sentenced Friday to three years of basic supervision but will serve no more jail time.

As part of the sentence, Brooke Skylar Richardson, 20, was to spend seven days in the county jail, but Warren County Judge Donald Oda II credited her with time already served.

Should she violate any terms of her supervision, Richardson could face up to 12 months behind bars, the judge said.

Richardson had been found not guilty of aggravated murder, involuntary manslaughter and child endangerment in the case, which has gone on for more than two years, since the remains of her newborn daughter, Annabelle, were found buried in her Carlisle backyard.

The infant's remains will be released to the Richardson family, which will provide a proper burial and give access to the site to the family of the baby's father, Oda said.

When the verdicts were read out Thursday, Richardson sobbed before she was led out of the courtroom in handcuffs.

The infant's paternal grandmother spoke at the hearing, telling the court that she had struggled to find the "right word" to describe the pain she's endured since learning of her grandchild, who would've now been 2 years, 4 months, 1 week old.

"'Broken,' 'shattered,' 'destroyed,'" she said. "None of them seem to fit the amount of pain I have felt ever since we found out that not only did I lose my first grandchild, but my baby -- who I would lay down my life for without a thought -- lost his first child, and Skylar had no intention of letting us know."

The defense and Richardson's father asked for leniency, citing her compliance with the requirements of her pre-trial supervision.

"I would do anything and above that you ask, and I understand," Richardson told the judge. "And I just wanted to say how sorry I was. I can sometimes be selfish, but I would like to think that I've become better in the knowledge that I've upset everyone and hurt so many people with what I've done."

Before handing down the sentence, the judge addressed the defendant, telling her, "I've always sort of thought of this case, Ms. Richardson, as a story of two little girls -- Skylar Richardson and Annabelle Richardson.

The maximum possible sentence Oda could have granted was 12 months in prison and a $2,500 fine.

But the judge called the case a "mandatory community control case," since Richardson had no prior criminal record, among other criteria. That limited him to ordering a sentence of, at most, six months in county jail, he said, which prosecutors called for.

Baby was found 2 months after childbirth

Richardson delivered her baby at home in her bedroom the night of May 7, 2017, when she was 18, CNN affiliate WKRC reported.

Two months after the baby she named Annabelle was born, investigators found the skeletal remains in a shallow grave with a flower on top placed by Richardson, according to the affiliate.

The sheriff's office started an investigation that led to the remains after Richardson showed up at her doctor's office -- where she'd taken a pregnancy test -- without a baby, prosecutors said in closing arguments.

Prosecutors said when the doctor asked, she burst into tears and said the baby was not alive at childbirth and she'd buried her in the backyard.

Prosecutors painted a picture of a teen who was in a new relationship at the time and wanted nothing to do with the baby or the man who impregnated her. They alleged she killed the baby after she gave birth in the middle of the night, believing she'd have no future as a mother.

"Upon finding out that she was pregnant by a boy she had nothing to do with, Brooke Richardson burst into tears and told her doctor that she could not have this baby," Prosecutor Steve Knippen told jurors, according to the station.

It said prosecutors showed the court a picture of her at the gym hours after giving birth and said she sent a message to her mother.

"My belly is back, OMG. I am never, ever, ever, ever letting it get like this again. You're about to see me looking freaking better than before, OMG," the text message said, according to Knippen.

Richardson did not take the stand in her own defense.