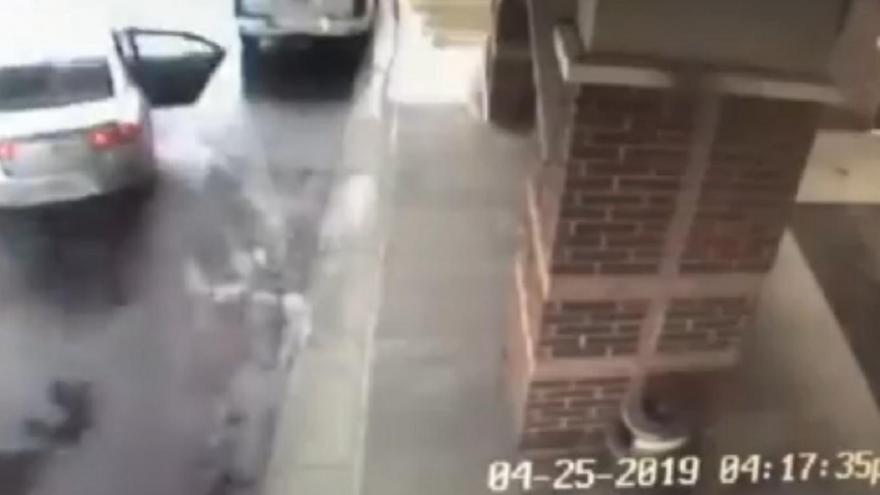 An image from security video of the moment the children escaped the car.

(CNN) -- An 8-year-old Ohio boy is being called a hero after he saved himself and his older sister from a kidnapping attempt.

The terrifying incident happened Thursday in Middletown, about 30 miles northeast of Cincinnati. The boy, only identified by the police as Chance, and his sister, identified as Skylar, were sitting in the backseat of their grandmother's car as she took a woman to a hospital emergency room. The grandmother, Nita Coburn, stepped out of the car to help the woman into the emergency room. About 10 seconds later a man jumped into the driver's seat and drove off.

"The little boy opened the door to escape and the little girl started to jump out also but the man grabbed the hoodie of the little girl, not allowing her to leave," the Middletown Division of Police wrote on its Facebook page. "As she tried to get away her little brother grabbed hold of her and pulled her away from the kidnapper and they both tumbled out of the vehicle as it was moving."

The kids' escape from the vehicle, and their grandmother's desperate attempt to save them, was captured on security video, which the police shared in another Facebook post. In the video, the car is seen being driven away from the emergency room entrance just as a passenger-side door swings open. Coburn runs up to the car and tries to grab a hold of the driver's side door of the vehicle, while the children tumble out of the passenger side.

Coburn was dragged by the vehicle for a short distance before she was forced to let go. Soon afterward, two officers saw the vehicle and stopped and arrested the driver. Dalvir Singh was charged with two counts of kidnapping and felonious assault and grand theft, police said.

Middletown's police chief praised the bravery and quick thinking of the 8-year-old boy.

"This little guy is a hero. No question. He pulled his sister out of the car with no concern for his own safety. That is incredible at his age," Middletown police's Facebook page said. "And outstanding work by (our officers) to find the suspect and take him down without incident. So proud of their work."

Middletown police said it would honor the boy for his heroic action.