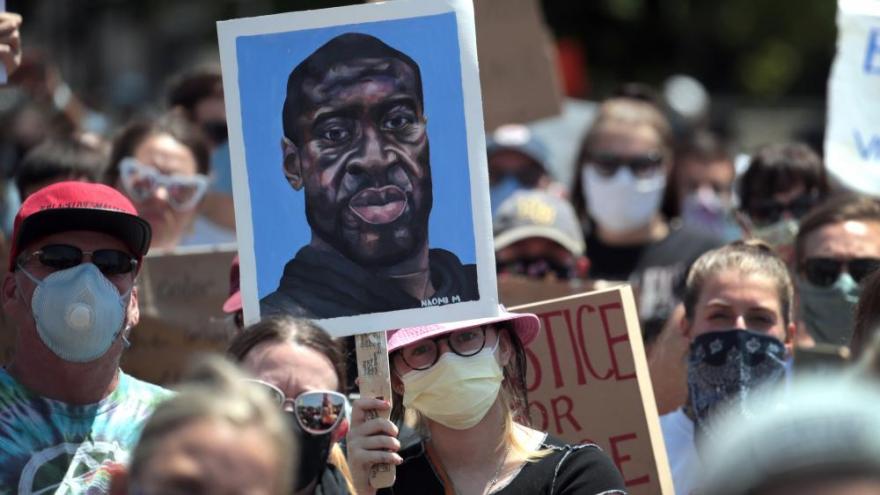 After George Floyd repeatedly told police that he couldn't breathe, former Minneapolis police Officer Derek Chauvin said, "Then stop talking, stop yelling, it takes a heck of a lot of oxygen to talk," according to transcripts of police body camera footage.

(CNN) -- After George Floyd repeatedly told police that he couldn't breathe, former Minneapolis police Officer Derek Chauvin said, "Then stop talking, stop yelling, it takes a heck of a lot of oxygen to talk," according to transcripts of police body camera footage.

Minutes later, Floyd was unresponsive and was later pronounced dead.

The transcripts detail the last moments of Floyd's life and were taken from body cameras worn by former Minneapolis officers Thomas Lane and J. Alexander Kueng. The documents were released Wednesday as part of a motion filed Tuesday in state court in Minneapolis.

The pretrial publicity by attorneys involved "will increase the risk of tainting a potential jury pool and will impair all parties' right to a fair trial," the court filing said.

Parties and attorneys for the parties should not disclose any "information, opinions, strategies, plans or potential evidence" related to the case to the media or to members of the general public, the filing states.

One of the attorneys for the defendants spoke to the media on Wednesday, "expounding on the merits of the case or commenting on other aspects of the case after a motion to dismiss was filed in State of Minnesota v. Thomas Kiernan Lane," according to the order.

Authorities have not released the body camera footage and CNN has not been able to corroborate the transcripts. CNN has reached out to the court requesting the videos mentioned in the motion.

CNN has reached out to an attorney representing the Floyd family.

Floyd died on May 25 after Chauvin knelt on Floyd's neck for nearly nine minutes. Lane and Kueng had helped restrain Floyd and former officer Tou Thao stood nearby.

Eric Nelson, an attorney for Chauvin, declined to comment on the transcripts on Wednesday.

Before Floyd was forced into the ground, he told officers that he couldn't breathe, shared that he had suffered from Covid-19 and was claustrophobic, according to the transcripts.

Floyd was scared as officers tried to place him in a squad car, the transcripts detail, and told officers to "tell my kids, I love them. I'm dead."

Later, as Floyd was pinned to the ground, Lane asked Chauvin if the officers should move Floyd to his side, raising concerns about a potential medical emergency, according to the transcripts.

"No, he's staying put where we got him," Chauvin replied, the transcript states.

According to the motion, Lane asked two times if Floyd should be moved to his side. Chauvin, a training officer and 20-year veteran, told Lane to keep him there until the ambulance arrived, according to the motion. Lane was assured by Chauvin that Floyd was fine and Lane was unable to see any "visible intentional infliction of harm," the motion says.

Lane's attorney, Gray, said in the motion that his client wasn't aware that Chauvin was committing a crime while they were restraining Floyd. The attorney said the decision to restrain Floyd was reasonably justified, according to the motion.