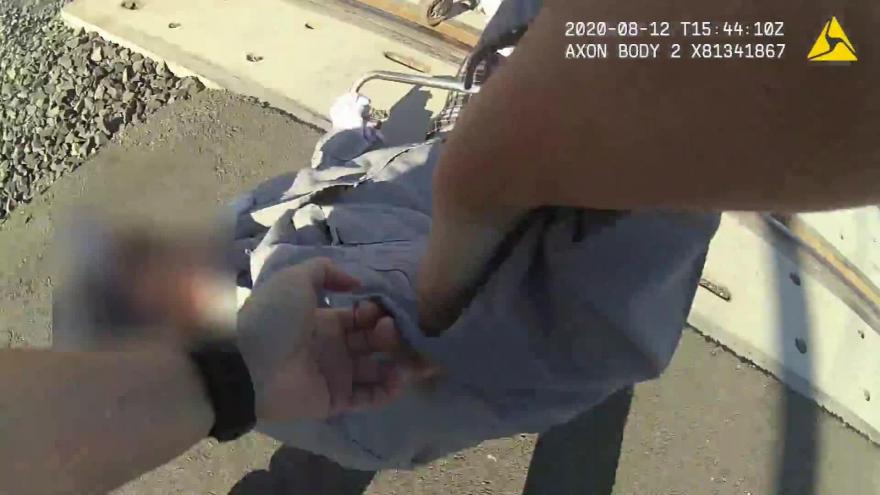 The moment after a Lodi police officer was able to save a man in a wheelchair who was stuck on train tracks.

(CNN) -- It's the kind of thing you see in the movies. For one California police officer, it was just a day on the job.

Officer Erica Urrea spotted a man in a wheelchair who appeared to be stuck on train tracks, according to a news release from her department in Lodi, near Sacramento.

As the railroad crossing arms started to come down, Urrea sprang into action on Wednesday morning, jumping out of her patrol car and running toward the 66-year-old.

With the train's horn growing louder, she pulled the man from his wheelchair and off the tracks just in time, the department said.

And thanks to Urrea's body camera, the entire rescue, which spanned 45 seconds, was caught on video.

In the footage, Urrea runs from her patrol car and asks the man if he can get up as she tugs to try to yank him up and out of the train's path.

Urrea and the man fall backward and, within 5 seconds -- as the two lie on the ground -- the train zooms by, barely missing them.

"Officer Urrea risked her own life to save another and her actions prevented a tragedy today," the department said in a statement. "We are extremely proud of Officer Erica Urrea and her heroism."

Police have not released the identity of the 66-year-old, who suffered a leg injury and was taken to a local hospital.