An octopus caught a bald eagle in a death grip; thanks to some salmon farmers, the eagle survived 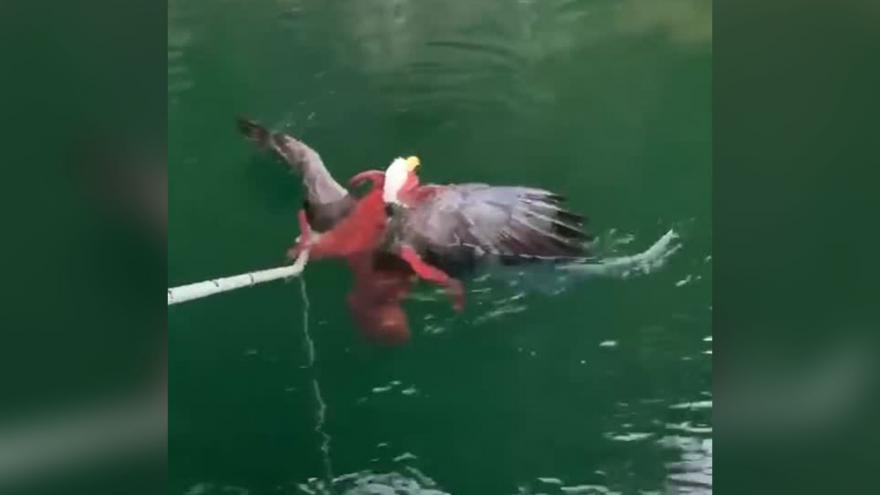 (CNN) -- A team of salmon farmers are feeling pretty proud after they were able to rescue a bald eagle from an octopus off the northwest tip of Canada's Vancouver Island.

The group was returning to their float house when they heard screeching and splashing sounds last Monday, according to salmon farmer John Ilett.

After investigating the sounds, Ilett said the team found "a full-sized eagle submerged in the water with a big giant octopus in the water trying to drag it down."

The team watched the interaction for about five minutes, unsure if they should intervene to help.

"We weren't sure if we should interfere because it is mother nature, survival of the fittest," Ilett said. "But it was heart wrenching -- to see this octopus was trying to drown this eagle."

Ilett and his team decided they had to do something to help. After getting close to the battle, Ilett reached out with a pole with a small hook attached to it while another co-worker started recording.

"I was able to just latch on to the octopus and give it a little tug," he said. "It released its grip ... which gave the eagle just enough time to get to shore.

"We weren't sure exactly how it was going to go down when I tested the pole," Illett said.

Ilett said he's been working on the water for about 20 years and admits he's seen incredible things, but this encounter ranks as the coolest to date. "It's moments like this why I love my job and being out in the environment where I can work and live," he said. "It's just amazing."

'I felt compassion for the bird'

Illett has been reading comments on social media discussing whether or not his team should have intervened and said it's a different feeling when you're watching the situation unfold in front of your own eyes.

"Am I at fault because I'm human and I felt compassion for the bird?" he said. "At the end of the day both animals are alive and well and they went their separate ways and we feel pretty good about what we did."

The US removed bald eagles from its list of endangered and threatened species in 2007 but the birds remain protected under the Bald and Golden Eagle Protection Act, the Migratory Bird Treaty Act and the Lacey Act. Under the MBTA , anyone harming one could face up to two years in prison and a $250,000 fine.

Correction: This story has been updated to reflect the correct description of the men who saved the bald eagle.