An NRA charity planned to raffle an AR-15 at a Texas event. Then Uvalde families protested and the group lost its site 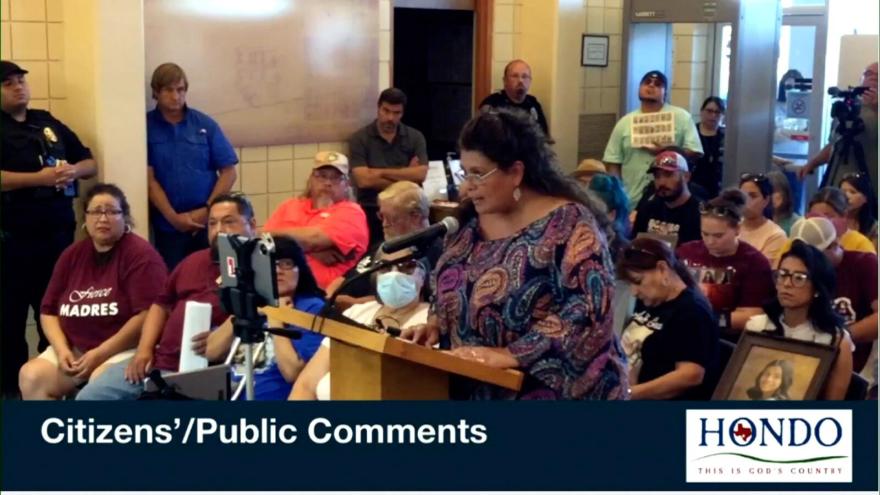 A fundraiser for a charity affiliated with the powerful National Rifle Association won't be held as planned on August 6 at a municipal facility in Texas after relatives of children slaughtered in May at an elementary school some 40 miles away lobbied city council members to deny the event its venue.

(CNN) -- A fundraiser for a charity affiliated with the powerful National Rifle Association won't be held as planned Saturday at a municipal facility in Texas after relatives of children slaughtered in May at an elementary school some 40 miles away lobbied city council members to deny the event its venue.

As some attendees held photos of Robb Elementary School shooting victims, the Hondo City Council voted 4-to-1 Monday to revoke a rental agreement that would have allowed members of the Medina Area Friends of NRA to hold a fundraiser at a site owned by the city of about 8,000 residents. The move came as the carnage in nearby Uvalde -- the most deadly US school shooting in nearly a decade -- has reignited debate over US gun laws and public safety.

Before Monday's vote, Jazmin Cazares, whose sister died in the Uvalde massacre, addressed council members, naming each Uvalde victim -- 19 fourth-graders and two teachers -- and describing how at least some survivors would perceive the NRA charity event publicized as including a gun raffle with a chance at an AR-15, the group's Facebook page states.

Investigators found one of the 18-year-old Uvalde shooter's AR-15-style rifles in the school after law enforcement killed him.

"It is a slap in the face to all of Uvalde, especially the ones that lost a loved one, some of us being here today. What's an even harder slap in the face is the AR-15 you get if you donate $5,000 to the NRA," she said. "What you guys decide to do next with this NRA meeting either proves me right or proves me wrong about how I feel about Hondo."

Nikki Cross, whose relative Uziyah Garcia was among those killed at Robb Elementary, was "not here protesting the NRA or anything like that," she said. "I am just here asking your community to take into consideration it's only been two months for us."

"What happened to 'love thy neighbor?' Is that not a thing here? The specific gun that they are giving away in this, what if that falls into the hands of another angry 18-year-old? Then it could be your children that are at risk, and we would stand with you. I am just asking that you postpone it. Give us time to grieve. We are going through enough already," she added.

Just days after the Uvalde mass shooting, the NRA hosted its annual convention in Houston, with former President Donald Trump and other GOP leaders rejecting nationwide efforts to overhaul gun laws and mocking Democrats and activists calling for change.

The foundation that had planned the Hondo event is "not the NRA. Although affiliated, the foundation is a separate legal entity. All the Friends of NRA foundation does is raise funds in furtherance of their charitable and educational mission," Sandy Steubing, a Hondo resident and volunteer with the charity, said Monday.

The annual Medina Area Friends of NRA event has taken place in August for 15 years, "and we've been planning this event since March," she added. The group did not immediately respond to CNN's request for comment.

"These events are planned months in advance with the goal of raising funds for local programs that promote safe and responsible gun ownership. Penalizing hundreds of volunteers and participants at the 11th hour for the crimes of a sick, evil criminal is misguided and wrong," Lars Dalseide, a spokesperson for the NRA, told CNN by email.

"There is no reason for you all to sit up here and vote on it. This is still America, isn't it?" he told council members. "I don't even understand why we are having this conversation, guys. Guns aren't going away."

But he was interrupted by Angel Garza, whose daughter Amerie Jo Garza, was slain at Robb Elementary.

"You don't know what we are going through. Nobody in this room has a right to tell us how to feel," he added as he left the room.

Council members adjourned to executive session to vote, then returned to announce their decision.