An invisible, odorless gas is pitting Texas against the Biden administration 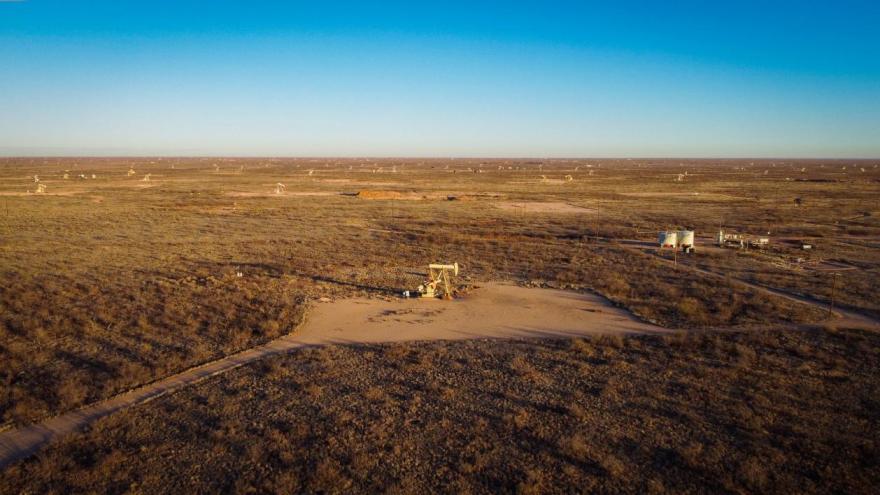 Scott Tinker, state geologist of Texas, agrees it would be better to gather the methane but says progress can be slow.

(CNN) -- Deep in the heart of Texas, above an oil patch about the size of Kansas, a little team in a small plane is trying to reveal a big problem.

They are methane hunters. With an infrared camera and a Picarro Cavity Ring-Down Laser Spectroscope, they fly spirals over pumps and compressor stations that stretch to both horizons. With each tight corkscrew, the little airplane sniffs out and measures planet-cooking, climate-changing pollution as the region below braces for an energy revolution amid a cold civil war.

More importantly, it also measures methane, which is 80 times more potent than carbon dioxide over the next 20 years. You know it better as natural gas. Heating and cooking are not the only methane culprits. Two-thirds of emissions come from belching cows, factory farms and rotting landfills. But as any Texan will tell you, it's a lot easier to control gas coming out of the ground than gas coming out of cows.

The "greenhouse effect" was discovered before women could vote (by a suffragist, in fact) but in 2021, the indoor gardening metaphor doesn't match the emergency. Instead, imagine a baby in a hot car. Carbon dioxide is like the steel and glass holding in the sun's rays as they bounce through the windshield. Methane provides the equivalent of cranking up the heater inside the car; it works much faster but is easier to control in the long term. Planet Earth, of course, is the baby.

Without the tools of a methane hunter, you can't see or smell natural gas but virtually all of Earth's peer-reviewed scientists agree that for life on Earth to survive with any semblance of today, it must go the way of the dodo along with coal and oil. Climatologists at NASA and the National Oceanic and Atmospheric Administration tell us that deadly changes will only get worse until people stop using fuels that burn and leak.

But in Texas, methane is so plentiful and cheap, it escaped largely unseen and unmeasured until both the Environmental Defense Fund and oil producers started using tools like the Picarro spectrometer. Scientific Aviation, based in Boulder, Colorado, owns this one and will sniff the sky for all kinds of customers, but only the EDF makes the data public.

"What we found here in the Permian Basin is that operators are wasting enough gas to heat about 2 million homes a year," says Kelsey Robinson, project manager for the EDF's PermianMAP Project.

Sometimes the methane leaks from faulty equipment or the tens of thousands of orphaned wells. Sometimes, when there is no one to buy it, they just burn it in a practice called flaring. Former President Donald Trump tried to remove all regulations on methane, a move so extreme that even ExxonMobil opposed it. But until President Joe Biden's Environmental Protection Agency can navigate the legal booby traps left by the Trump administration's giveaways to methane leakers, it is up to oil and gas companies to fix a problem no one can see or smell.

"We found that the Permian Basin is emitting more than double any other oil and gas region in the United States," Robinson said.

Named after Earth's biggest mass extinction event, the Permian Basin is so flat you'd swear you can see the curvature of Earth standing in the bed of a pickup. When oily, gassy, flammable proof of the Great Dying — the nickname given to the mass-extinction event that marked the end of the Permian geologic period — was found under the red dirt, Midland and Odessa grew into the vena cava of the state's oil industry, the setting for "Friday Night Lights" and the perfect place for Texas Gov. Greg Abbott to fire the first shot in a methane civil war of 2021.

"I'm in Midland to make clear that Texas is going to protect the oil and gas industry from any type of hostile attack launched from Washington, DC," Abbott said, days after Biden signed his first round of executive orders aimed at a climate in crisis.

Then the Republican governor signed an executive order of his own, commanding every state agency to bring him every reason to sue and stop the Biden administration's clean energy efforts. In calling out cities like San Francisco, where a movement to ban natural gas heaters and appliances from new construction is growing, Abbott vowed to ban all bans.

"In Texas, we will not let cities use political correctness to dictate what energy source you use," he said. "So I am supporting legislation that prohibits cities and counties from banning natural gas appliances."

But as a sign of the changing times, Abbott's fierce opposition to the Paris Accord puts him at odds with the statements and soundbites of Big Oil's biggest lobbyist.

"We think the threat of climate change is very real," Mike Sommers, CEO of the American Petroleum Institute (API), told CNN. "We support both industry actions and actions by the federal government in the United States and around the globe to address this very important issue that we know is existential in nature."

As more European energy companies embrace a green transition, France's Total became the first oil giant to tear up its API membership, citing differences over a carbon tax, electric car subsidies and ... methane. In October, the French government stepped in to block a $7 billion deal, deciding that liquified natural gas from Texas is too dirty for their standards.

But Sommers says the API is willing to work with the Biden administration on regulating new and existing sources of methane.

A call for more pipelines

As for Biden being an existential threat to oil and gas, Sommers seems less worried and argues that there is no need to transition them to geothermal, solar or wind because the world will demand fuels that burn and leak for generations.

To fix the methane problem, he argues that if America only had more pipelines, industry wouldn't have to needlessly burn so much natural gas.

"I think the biggest challenge that we have from an emissions perspective, honestly, is getting our infrastructure right," Sommers said. "We need to make sure that we have pipelines in place to get these products to market as quickly as possible. And what that means is we need a regulatory structure that allows these pipelines to be built."

Kelsey Robinson of the EDF has a simpler idea. "Reducing methane emissions is actually a job creator in and of itself because we need people to go out to survey these sites and then take steps to fix those leaks."

"It doesn't make sense to burn it," said Texas state geologist Scott Tinker as we stroll the elaborate rock garden map of Texas outside his office. "They don't have the gathering systems to collect it. So rather than leaking the methane, they burn it and leak CO2. CO2 is better as a product than methane if you're going to put something into the atmosphere. But it'd be much better to gather it."

After the 2008 recession, Tinker says the fracking boom caught West Texas by surprise. Years of oil field decline saw a renaissance when the new method of injecting water into shale doubled oil production and created gushers of invisible methane with no way to catch it.

"The conversation is shifting," Tinker says, after public and stockholder pressure. "It's happening, but it's slow, takes a lot of money, takes approval for the pipelines. It takes an industry and a regulatory system that caused that to happen in the first place."

Sommers insists that his API members are taking the problem seriously, with 70% of onshore producers joining the Environmental Partnership, which is all about reducing methane emissions within the oil and gas industry, he said.

"It brings together producers, large and small, to share technology and to share best practices on how to reduce methane emissions," he said. "And it's working."

Checking in from space

But far beyond the methane problem, the only way to save both life on Earth and the fossil fuel industry is to rabidly develop carbon capture and storage technology on a mind-boggling scale. This would require sophisticated, expensive methane catchers to be built around the smokestacks of every petrochemical works, power plant and steel mill in the world.

Hopes for such a miracle fix took a major setback this week, when the Petra Nova plant outside of Houston shut down indefinitely. Backed by a $190 million grant from the Department of Energy, the four-year plant set out to capture 90% of the carbon dioxide pumping out of a 240-megawatt, coal-fired power plant. It was the only major carbon-capture project in the U.S. after a $7.5 billion project in Mississippi was shuttered before ever going online.

Exxon Mobil says they are working on 20 new carbon capture projects around the world, including one in Texas, as part of a new $3 billion investment in a business they call ExxonMobil Low Carbon Solutions.

But Robinson and her flying methane hunters have heard promises before. Without enforceable regulations for producers big and small, she says profit motive almost always wins.

"ExxonMobil and some of the other big producers have set some pretty lofty goals for how they want to keep their emissions," Robinson said. "But we found that here in the Permian Basin, the methane leak rate is over 10 times higher than what a lot of companies have set out to do."

In the meantime, she says she'll keep her little team flying, sniffing and measuring methane while the airplane will soon have some high-altitude backup. After a $100 million grant from Amazon CEO Jeff Bezos' Earth Fund, the EDF will soon launch their own methane-hunting satellite.