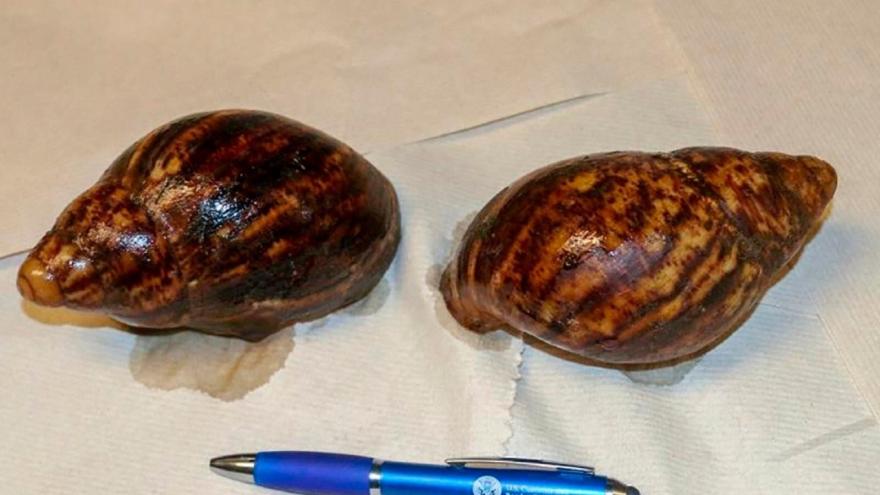 (CNN) -- A pair of beagles discovered two Giant African Snails in the luggage of a passenger arriving at Hartsfield-Jackson Atlanta International airport, according to US Customs and Border Protection.

Canine comrades Candie and Chipper, members of CBP's "Beagle Brigade," alerted customs officials Sunday to a checked bag from Nigeria at the international baggage claim. Inside were two Giant African Snails -- a particularly invasive species -- and prohibited fruits and vegetables, according to a news release from the CBP.

What's so bad about a couple of snails? This snail species is "one of the most damaging" in the world, according to the US Department of Agriculture, because they reproduce quickly -- about 1,200 eggs in one year -- and eat at least 500 types of plants, including peanuts and melons. They can also cause damage to the structure of plaster and stucco buildings.

And once they are in, it's hard to get them out. When Giant African Snails were first found in southern Florida in the 1960s, it took a decade and $1 million to eradicate them, the USDA said. Eradication efforts are ongoing after the snails were reintroduced in 2011.

"CBP is on the frontline 24/7, searching for anything entering our country that could potentially harm our citizens," Lee Deloatch, the acting area port director for the Atlanta CBP in a statement. "Our beagles sniffing out these snails highlights how valuable our canine members are to protecting the U.S."

The snails were turned over to the USDA for evaluation, and the traveler was not penalized, but was warned about properly declaring pests and agriculture, according to the release.