An intern on his first day was among the victims of the Aurora, Illinois, mass shooting 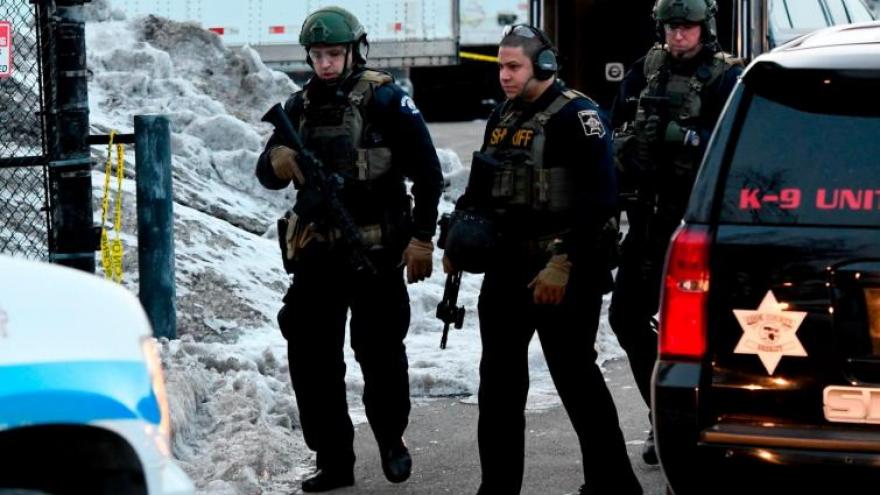 Law enforcement officers work at the scene of a shooting at the Henry Pratt Co. on Friday, Feb. 15, 2019, in Aurora, Ill.

(CNN) -- Five people were killed in Aurora, Illinois, on Friday when a man being let go from his job opened fire at the Henry Pratt Co. in the Chicago suburb. During the termination meeting, the gunman took out a pistol and began killing people, authorities said. He then stormed into a warehouse and was killed after firing at police.

"Tomorrow, the families of the victims will be less than whole," Illinois Gov. J.B. Pritzker said. "They join a group that should not exist and yet continues to grow."

Here's what we know about the people who died in the shooting:

Trevor Wehner, a student at Northern Illinois University, was a human resources intern from Sheridan, Illinois. Friday was his first day as an intern at the company, according to a statement from the school's president. He was set to graduate in May with a degree in human resource management.

Clayton Parks of Elgin, Illinois, was the human resources manager at Henry Pratt. He was also an alumnus of Northern Illinois University, the school's statement said. He graduated in 2014 from the College of Business.

According to a letter to employees from Scott Hall, the CEO of Mueller Water Products, which owns the Henry Pratt Co., Parks joined the company in November 2018.

"Every time I've closed my eyes over the last twelve hours, I've opened them hoping to wake from a terrible dream, but that's not the case," his wife, Abby Parks wrote on Facebook. "I'm living my worst nightmare."

"My husband, my love, my best friend, and the incredible father of our sweet son was taken from us yesterday.... and I am devastated."

"I'll love you always and miss you forever, Clay," she wrote.

Russell Beyer was a mold operator from Yorkville, Illinois. He had worked for Henry Pratt for more than 20 years and was union chairman, Hall's letter said.

Vicente Juarez from Oswego, Illinois, was a stockroom attendant and forklift operator at the company. According to Hall, he joined Henry Pratt in 2006.

Juarez was a grandfather of eight, according to CNN affiliate WGN.

"He was a great person. A loving father. A great uncle," his niece Marisela Madrigal told WGN. "Shame, big shame that he was taken too soon."

Ariana Castro, Juarez's niece, began a GoFundMe account to cover funeral costs and assist his family. The campaign has so far raised more than $19,000.

"On February 15, 2019 Vicente Juarez, a husband, father, grandfather, brother, son, uncle, cousin... lost his life in the Henry Pratt Shooting in Aurora, IL," she wrote. "As many of you know, Vicente was the head of his household and his family depended on him extensively. We know that many other families have also experienced a loss and we appreciate any help."

Josh Pinkard, also of Oswego, was the plant manager. He joined the company 13 years ago at a facility in Alabama, Hall's letter said. He moved to Aurora last spring.

Brian Haynes said he was close with Pinkard's family and told CNN affiliate WBMA that Pinkard was "a very special young man," intelligent and a vocal Christian.

"He never said anything bad about anybody," said Haynes. "He was always positive."

In a series of posts on Facebook, Pinkard's wife Terra said that her husband had been the "love of my life" and that telling their children he had died was the hardest thing she'd ever had to do.

"I want to shout from the rooftops about how amazing Josh was! He was brilliant! The smartest person I've ever met! My best friend! The man I would have leaned on during devastation like this who would tell me it's OK Terra, it is all going to be fine," Terra Pinkard wrote.

She said her husband had a twin sister.

Another employee and five police officers were wounded, according to Aurora police.

A sixth officer, who is 23, suffered a minor injury unrelated to gunfire. He's served on the Aurora force for two years.

In a Facebook post, the police department said Sunday all but one of the injured officers have been released from the Chicago metro area hospitals where they received treatment.

None of the officers' injuries were considered life-threatening.

The wounded officers range in age from 24 to 53, according to a news release, and have served in the police department from four to 30 years.