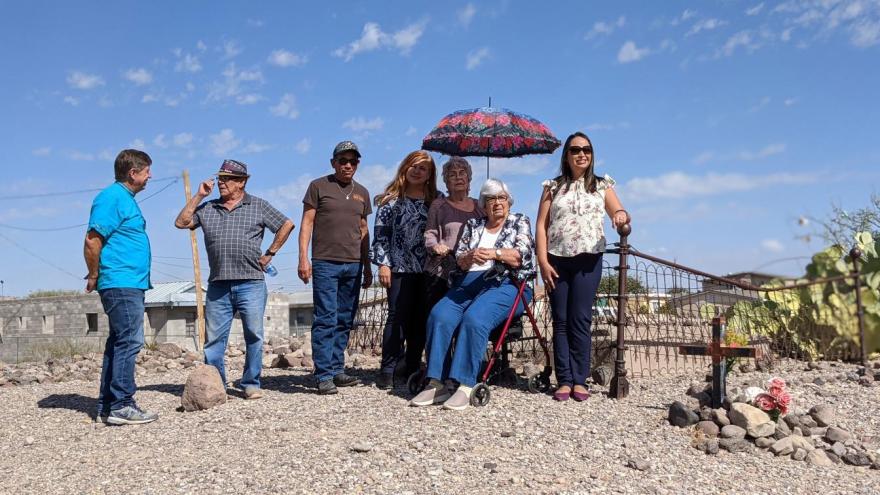 (CNN) -- In the middle of a small border town in West Texas sits an unassuming dirt mound dotted with piles of rocks, with just some wire strung between posts separating it from the road.

To the outside observer, the patch of land might easily be overlooked as part of the desert landscape. Many of the area's Indigenous residents, however, know it as the Cementerio del Barrio de los Lipanes -- the sacred site where their ancestors are buried.

For years, the Lipan Apache cemetery in Presidio, Texas, sat mostly vacant and unchanged, said Oscar Rodriguez, tribal administrator for the Lipan Apache Tribe of Texas. But in the 1970s, development started to encroach on the cemetery, with newer generations largely unaware of the site's significance.

Residents built houses and took rocks from the piles that marked graves, and children rode dirt bikes over the hill. As the mound was reduced to a fraction of its original size, what remained of the cemetery was jointly owned by the city of Presidio and Presidio County -- and was at risk of being damaged or destroyed.

In a historic move earlier this week, local officials transferred those lands back to the Lipan Apache Tribe of Texas -- making the tribe the official stewards of its sacred burial ground. The Presidio City Council voted on Monday to transfer its two lots to Presidio County, which had already approved a measure last month to hand the cemetery back to the tribe.

"It's hard to express how we feel about it," Rodriguez said. "But we're thankful that we're there because among other things, what it means is a respectful recognition by the local community of the Lipans."

The transfer is the latest instance of land being repatriated to Indigenous tribes -- a small victory in a movement that has been building across the nation, from the Black Hills of South Dakota and beyond. But while some efforts in other parts of the country have proved contentious, what happened in Presidio transpired more quietly.

How the transfer unfolded

The Lipan Apaches lived in the Great Plains before they began migrating to Texas in 1600s. A war with the Comanche in the north and the threat of Spanish occupation in the south eventually caused the Lipan Apache to splinter off into different bands. One of those bands was the Prairie Grass Band, which in the 1790s settled near present-day Presidio as part of a peace agreement with the Spanish colonizers.

Over time, the Lipan integrated with the local community and the settlement became the neighborhood known as Barrio de los Lipanes. Deceased members of the Prairie Grass Band and other Lipan bands were buried in the cemetery, which remained there undisturbed through the 1960s.

Christina Hernandez is among those whose ancestors are buried in the cemetery.

Hernandez said she has been visiting the site with her family ever since she was a child to plant flowers and tend to the graves of her great aunt's grandfather and his brothers -- the only marked graves in the cemetery. When she and her father noticed during a visit a few years ago that parts of the mound were eroding, they reached out to the Lipan Apache tribe to inquire about building a fence to protect the resting place of their ancestors.

The cemetery had been designated a Texas State Antiquities Landmark after the Lipan Apache tribe and the Big Bend Conservation Alliance petitioned for the status in 2013. But because of its status as a historical site, Hernandez said the tribe and her family had to consult with the city and the county about the fence.

When it became clear that the project could cost between $40,000 to $60,000 and would require ground-penetrating radar, Hernandez said local officials began to consider the possibility of giving it back to the Lipan Apache tribe.

Local leaders had "enough problems trying to pave streets without managing a cemetery," said Rod Ponton, attorney for both Presidio County and the city of Presidio. The tribe would also be eligible for grants to help preserve and maintain the cemetery, he added.

"[We proposed] that the best solution would be to have both entities transfer their interests prospectively to the Lipan tribe, because they're the ones that need to be the custodians of their heritage," said Ponton, who is also the chair of the Presidio County Historical Commission.

The decision to transfer the land back to the tribe was met with a sense of relief by tribal authorities and descendants of those buried in the cemetery.

Rodriguez said he was grateful that the land was returned without devolving into a heated, political dispute.

"We are just elated with the community response," he added. "We got 100% cooperation and support all the time by everybody."

What's next for the cemetery

The Lipan Apache tribe has since hired an architect to design the fence that will serve as a barrier between the cemetery and the surrounding area, Rodriguez said. The Big Bend Sentinel reported that the health insurance and health care provider Amerigroup had pledged $10,000 toward the project. There are plans for other restoration efforts, too.

Hernandez, for her part, said that while she was grateful that local officials acknowledged how previous generations had allowed the cemetery to fall into disrepair, she couldn't help but feel that the transfer was a way for them to offload the responsibility of maintaining the burial ground.

"I'm really happy they don't have ownership of my family anymore, but at the same time, I'm kind of sad that they don't feel that they have any more ownership with what happens within the community surrounding the cemetery," she said.

Hernandez added that she would like to see a cultural and educational center at the site where visitors can both learn about the history and significance of the cemetery and understand just how monumental it is for a tribe to get its land back.