'An existential threat': The Republicans calling for their party to reject QAnon conspiracy theories 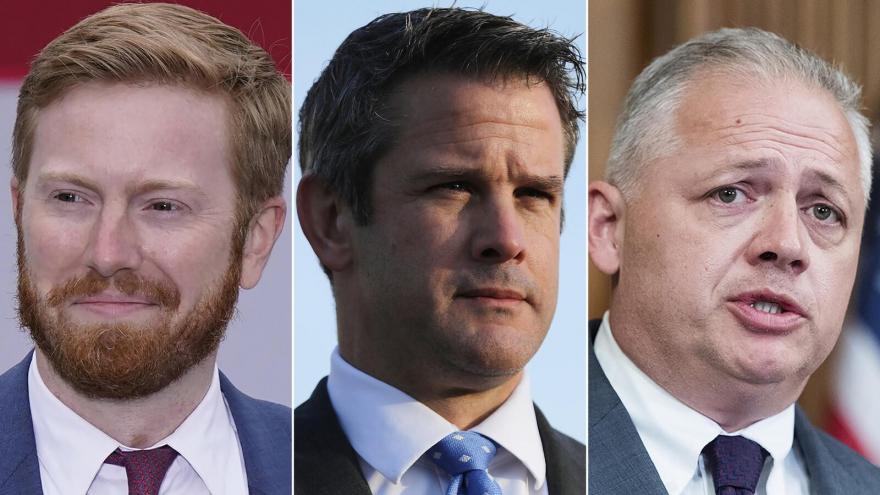 The Republicans are calling for their party to reject QAnon conspiracy theories.

(CNN) -- Republican Rep. Peter Meijer has a warning for his party: He fears baseless conspiracy theories like QAnon will destroy the GOP from within if Republicans don't decisively and unequivocally condemn the false and dangerous beliefs and take action to stop their spread.

"The fact that a significant plurality, if not potentially a majority, of our voters have been deceived into this creation of an alternate reality could very well be an existential threat to the party," Meijer, who was one of 10 House Republicans who voted to impeach former President Donald Trump for inciting the deadly attack at the US Capitol, told CNN in an interview.

Frequently described as a virtual cult, QAnon is a sprawling far-right conspiracy theory that promotes the absurd and false claim that Trump has been locked in a battle against a shadowy cabal of Satan-worshipping pedophiles made up of prominent Democratic politicians and liberal celebrities. Members of the violent pro-Trump mob that stormed the Capitol had ties to QAnon, and the conspiracy theory has made its way from online message boards into the political mainstream in recent years.

"When we say QAnon, you have the sort of extreme forms, but you also just have this softer, gradual undermining of any shared, collective sense of truth," Meijer said. The Michigan freshman believes conspiracy theories fuel "incredibly unrealistic and unachievable expectations" and "a cycle of disillusionment and alienation" that could lead conservative voters to sit out elections or, in a worst-case scenario, turn to political violence, like what happened on January 6.

How deeply far-right conspiracy theories take hold within the Republican Party, and what the party does to either embrace or reject them, will have major consequences for the future of the GOP and American politics.

Meijer is far from the only Republican in Congress disturbed by the rise of QAnon, but he is one of a rare few willing to publicly and repeatedly denounce it.

Republicans who speak out risk a backlash, and many would rather dismiss, downplay or ignore the issue. Rep. Marjorie Taylor Greene, a Republican from Georgia, famously signaled outright support for the conspiracy theory before she was elected to office, though she has recently attempted to distance herself from it.

CNN reached out to the offices of more than a dozen GOP members of Congress to request interviews for this story, and only two agreed to participate.

The lonely voices within the GOP who continue to take a stand must now grapple with what it would take for the party to turn away from conspiracy theories.

Most recognize they face a difficult fight, but some hope they may be able to grow their ranks in Congress in the future, and one upcoming congressional election in Texas will serve as an early test of whether an anti-conspiracy theory message can resonate in a red district.

'A long-term battle for the soul of the party'

Rep. Adam Kinzinger, who also voted to impeach Trump, may be the loudest voice within the Republican Party taking on QAnon.

He recently launched a political action committee as part of an effort he's calling "Country First" that seeks to counter the GOP's embrace of conspiracy theories and the former President. The congressman has endorsed the nine other House Republicans who voted to impeach over the Capitol attack as they now face down the potential threat of primary challenges.

He has also endorsed a Texas GOP congressional candidate, Michael Wood, who is running in a crowded field in the state's sixth district on a platform calling for Republicans to turn away from Trump and reject conspiracy theories. Wood is running in a special election taking place on May 1 to fill the House seat previously held by the late Republican Rep. Ron Wright, who died in February after contracting Covid.

"We are not the party of conspiracy theories and QAnon. We can be again the party of ideas," Wood says in a video on his campaign website.

Wood blames Trump for the spread of conspiracy theories within the party, and believes Republicans must repudiate Trump to defeat QAnon. Trump has long embraced conspiracy theories, including birtherism. He forcefully pushed the lie that the election was stolen from him and while he was in office, he praised QAnon followers for supporting him and refused to denounce the conspiracy theory.

"I think he bears direct responsibility for the rise of conspiratorial thinking in the Republican Party and the conservative movement as a whole," Wood said in an interview. "The big lie that he promulgated after Election Day did a whole lot of harm to our civic institutions."

Kinzinger hopes that whatever the outcome in the special election, his endorsement will show like-minded Republicans they're not alone and encourage others to run for office on a similar platform.

"I think what's important is that people see there are people out there that support you, that will back you if you do the right thing," he said. "It's a long-term battle for the soul of the party."

Former GOP Rep. Denver Riggleman of Virginia is outspoken in his opposition to QAnon, and he believes that is part of the reason he was voted out of office.

While serving in Congress, Riggleman co-sponsored a bipartisan resolution condemning QAnon that passed in the House overwhelmingly, though seventeen Republicans voted in opposition and 34 didn't vote at all. But he thinks most Republican lawmakers "want to have it both ways" when it comes to the issue of conspiracy theories.

The former congressman said Republicans frequently try to make it look like they're standing up for principle, while at the same time "winking and nodding" at conspiracy theories in an effort to get more votes.

It's difficult to pinpoint exactly how widespread belief in QAnon is in the Republican Party. According to the Pew Research Center, roughly a quarter of Republicans who know about QAnon view its supporters favorably, though nearly half of Republicans say they know nothing at all about the conspiracy theory.

Riggleman believes a major problem right now is that there's a strong "contingent of GOP voters who have completely lost themselves in the rabbit hole of conspiracies, disinformation and grievance politics," and most Republican lawmakers "want to get re-elected so they would rather have people like me shut the hell up, even though they know I'm right."

"It's almost like we're facts-based pariahs that are trying to sort of rein in this insanity that's gone on," he said.

"It does feel lonely sometimes in terms of being the outspoken voice," Kinzinger said. "The reality is I think if you're a sitting member of Congress it's easy to say, I'm going to ignore this."

Wood, the Texas congressional candidate, is frustrated that, in his view, most GOP congressional leaders have not done enough to denounce QAnon conspiracy theories.

"I've been incredibly disappointed by Republican leadership both in the House of Representatives and in the Senate," he said, though he praised Rep. Liz Cheney, the No. 3 House Republican, who voted to impeach Trump over the attack on the Capitol and has said the GOP "cannot become the party of QAnon."

CNN reached out to House and Senate GOP leadership offices for comment. McConnell's office pointed to the Senate Minority Leader's past criticism of Greene where he said earlier this year that "looney lies and conspiracy theories are cancer for the Republican party and our country."

Wood specifically takes issue with House GOP leader Kevin McCarthy's decision to meet with Trump to discuss efforts to take back the House majority after the riots, and believes the move demonstrated both a lack of courage and a losing strategy.

"Kevin McCarthy has been a giant disappointment. He was elected leader for a reason and he hasn't acted like a leader at all over the past few months," he said.

As the GOP charts a path forward after Trump lost the White House, Kinzinger said he does not want to see Republicans push voting laws based on false claims of widespread election fraud.

"The narrative is almost we have to tighten our election system so that the next election isn't stolen again, and that is garbage," he said.

Republicans in Georgia recently sped a sweeping elections bill into law, making it the first presidential battleground to impose new voting restrictions following Biden's victory in the state. Republicans cast the measure, which has sparked intense national controversy, as necessary to boost confidence in elections after the 2020 election saw Trump make repeated and unsubstantiated claims of fraud.

The Illinois congressman said that he hasn't followed the details of the Georgia law closely and thinks that some of the Democratic pushback has been "overblown," but he also believes there is valid criticism that it was enacted in reaction to false claims of widespread voter fraud.

Kinzinger hopes that the January 6 Capitol attack will ultimately prove to be a "turning point" for the Republican Party, but thinks it may take quite some time to undo the damage that was done.

"I think it will be a turning point in the long run. I think in the short-term there were a number of people who have kind of woken up to it, but there's a number who haven't," he said.

Riggleman thinks QAnon has taken hold because it gives people something to believe in. "It's an apocalyptic, messianic conspiracy theory that allows people to almost play act in this good versus evil battle against the global forces of evil," he said, adding that people become "wrapped up in that" and it becomes "difficult to disentangle them from those theories."

Meijer is concerned that embracing conspiracy theories like QAnon could make it harder for the GOP to recalibrate and rebuild after losing the White House and being in the minority in both chambers.

"I think it's all part of this broader trend of blame casting," the congressman said. "In the case of QAnon, it's well, why am I in the position I'm in? Well, it's because others are holding me down. Why did we lose this election? Well, it wasn't because our candidate wasn't the best or had made mistakes, it was because it was stolen. It's these ways of distancing oneself from responsibility and accountability."

As one of the Republicans warning about the dangers of QAnon and conspiracy theory thinking, Meijer understands what he's up against, but he says he's determined to keep speaking out.

"It's important to not let the record go uncorrected and to continue to speak the truth," Meijer said. "It's something I definitely do at my peril, both politically and otherwise, but I didn't run for office to seek the easy path and I'm certainly not going to cower away from what I think is an important responsibility."