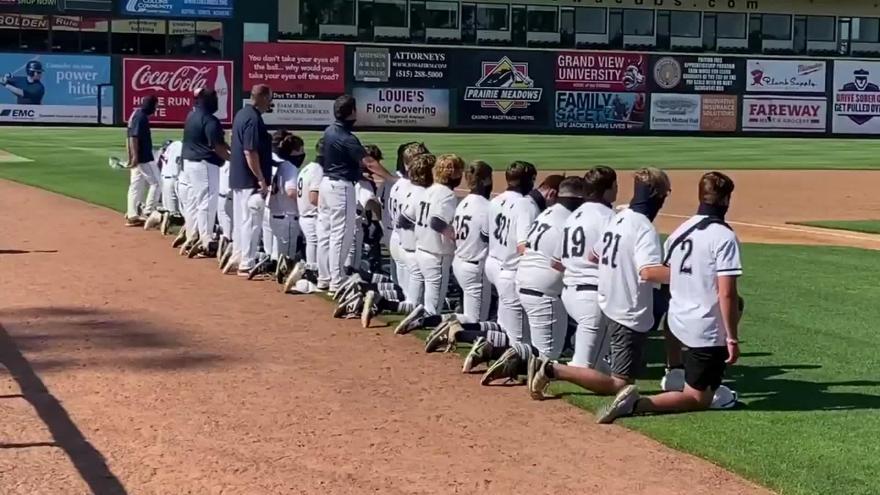 The varsity baseball team at Roosevelt High School knelt at the season opener.

(CNN) -- As Iowa became the first state to resume high school sports this week, one baseball team took a stand by kneeling.

The entire Roosevelt High School varsity baseball team took a knee as the National Anthem played at its season opener in Des Moines on Monday night. Team members said they did it to support the ongoing protests for social justice and racial equality.

Breonna Taylor, George Floyd and Rayshard Brooks are just three of the victims of police brutality this year and protests in their honor continue across the country. As sports resume this summer, people are watching how athletes react to the national outcry when they go onto the field.

Athletes have been taking a knee during the National Anthem to stand against police brutality since San Francisco 49ers quarterback Colin Kaepernick began the movement in 2016.

In this case, it wasn't an MLB or NFL player kneeling that brought attention to a cause. It was a high school team.

"No disrespect to the flag. It's simply to bring attention to the issues at hand, and I think we did the right thing," Roosevelt senior Alex Pendergast told CNN affiliate WHO.

"It made me feel good because our kids are in it together," Johnson said. "We want those kids to be able to express themselves, and it was neat for us to see all of our kids do that."

The National Federation of State High School Associations confirmed to CNN that Iowa was the first state to resume high school sports since the start of the coronavirus pandemic.

Iowa is the only state that has summer baseball and softball, which explains why they're the first sports to resume.

"We trust that our administrators, coaches, umpires and fans will responsibly follow the guidelines in place to keep themselves and each other safe," Iowa High School Athletic Association Executive Director Tom Keating said in a statement.

"This is terrific news and is a step toward getting our student-athletes reconnected to the activities that mean so much to them," he said.

While Iowa is the first state to resume official competition, other states are also starting up summer sports to practice, Porter said. The NFHS has a running list of what each state is doing in terms of high school sports.