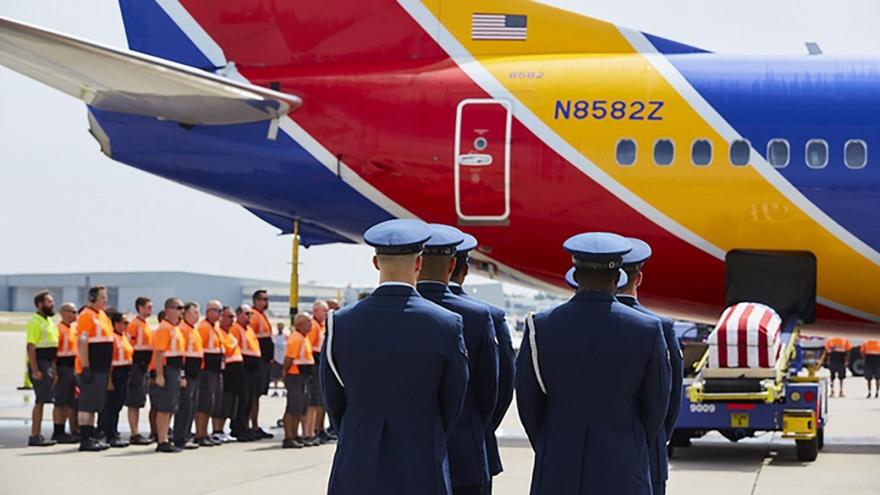 Col. Knight's remains were flown back home by his son.

(CNN) -- Bryan Knight was 5 years old when he said goodbye to his father at an airport in Dallas, Texas, just before he was sent off to the Vietnam War.

That was the last time he saw his father.

A few months later, US Air Force Maj. Roy A. Knight Jr., 36, went missing in action on May 19, 1967. The pilot was leading a flight of two A-1E Skyraider aircraft on a strike mission over northern Laos when his aircraft was shot down by anti-aircraft fire.

No one reported seeing a parachute before the aircraft crashed, bursting into flames, nor was a beeper signal heard. Search and rescue efforts were initiated but due to intense hostile ground fire, an organized search was not conducted. He was declared deceased by the Air Force in September 1974. During that time, he was promoted to colonel.

The crash site was excavated in March 1994 and life support items were recovered. The site was investigated four additional times in subsequent years.

"They had been searching in my dad's crash site area, and they said we didn't find human remains," Knight told CNN affiliate KTVT.

Earlier this year, the Defense POW/MIA Accounting Agency informed Knight that his father's remains had been found.

On Thursday, Knight -- a pilot for Southwest -- flew his father's remains back to the place where he last saw him 52 years ago, Dallas Love Field Airport.

"You can't imagine what an honor that is for a son to be able to do that for his father," Knight said.

"Our Southwest Airlines family is honored to support his long-hoped homecoming and join in tribute to Col. Knight as well as every other military hero who has paid the ultimate sacrifice while serving in the armed forces," Southwest Airlines said in a statement to CNN.

Canadian journalist Jackson Proskow was at the airport, waiting for his flight home, when he heard a gate agent announce the arrival of Knight's flight and shared the story of how the son was flying home his father's remains.

Proskow, who works for Canada's Global News, captured the moment in a series of photographs and tweets. The photos showed the honor guard waiting for and then carrying the casket, while the ground crew stood at attention. Airport firetrucks performed a water salute as the airplane arrived at the gate. Inside the terminal, passengers and staff lined the windows to watch.

"The entire terminal has come to watch this arrival," Proskow said on Twitter. In another post, he said," Incredible moment to watch. The entire airport fell silent."

Col. Knight will be buried on Saturday in Weatherford, Texas. There are 1,587 US Defense Department personnel who are still unaccounted for from the Vietnam War.