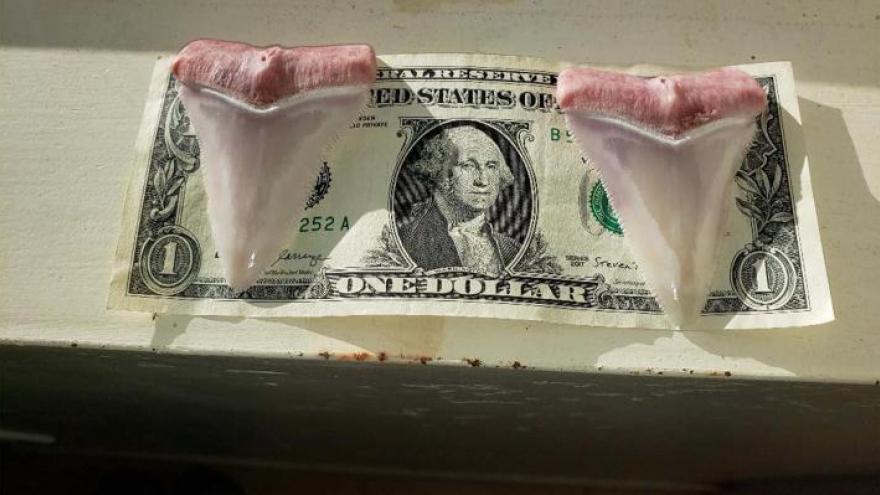 McDaniel said he gave one tooth to Chambers and he will keep the other.

(CNN) -- A kayaker came up close and personal with a great white off the coast of California this weekend, and has the shark teeth to prove it.

Danny McDaniel and his friend, Jon Chambers, were kayaking near Ship Rock, about two miles east of Santa Catalina Island, on Saturday when McDaniel felt something hitting the side of his kayak.

"I thought at first it was Jon messing with me," McDaniel, 51, told CNN Tuesday. Chambers was behind McDaniel in another kayak.

"But it was way too much power for Jon and was on the wrong side of the boat."

The two men were visiting the area with a group of sixty other divers with Power Scuba. They had just completed a dive in this area that morning and decided to go out kayaking before their night dive.

Facing off with the shark

As McDaniel looked down into the water he said he saw the culprit that was pushing the back end of his boat -- an "enormous" great white shark.

"I felt like I was being pushed like a toy in the water," said McDaniel, who lives in San Diego.

The shark had sunk its teeth into the back end of the boat and pushed McDaniel around till he was face-to-face with Chambers.

"The whole upper body of the shark was out of water," he said. "It was humongous."

The shark soon let go and went deep into the water, according to McDaniel, who said the whole ordeal lasted about five seconds.

"I guess he thought the kayak wasn't tasty and let go," he said. McDaniel said he had his drone with him but it wasn't up in the air yet.

Chambers told him that the shark was at least double the length of the nine-foot boat.

The shark's teeth tell us how big it was

Great white sharks are 4-5 feet when born and adults grow to about 21 feet long, according to the California Department of Fish and Wildlife.

After inspecting his kayak, McDaniel found that the shark left behind souvenirs -- two teeth and a massive jaw imprint.

The teeth measurements were sent to Ben Frable, Marine Vertebrates Collection Manager at Scripps Institution of Oceanography in La Jolla, California, to help determine the size of the animal.

"We estimate based on the size of the tooth this shark is very big," Frable told CNN. "And this shark is probably somewhere between 17-20 feet long."

"It is pretty amazing and encouraging that such large animals are still able to exist out there with fishing activities and human encroachment and environmental change," Frable said.

"Big individuals like these, especially if they are female, are very important for species' health and survival as they can produce and have produced more offspring than others."

After encountering the shark, they got back in the water

McDaniel said he knows the exact moment they encountered the shark, because his fitness tracker showed a spike in his heart rate at 4:30 p.m. that day. The two men decided to scrap their plans of exploring Ship Rock and headed back to land to tell others in their scuba diving group what had happened.

"We looked around that the shark was out of the area and then started cracking up and laughing," McDaniel said. "What a once in a lifetime experience for both of us."

But the experience didn't deter the men from getting back in the water -- just a few hours later they went for a night dive.

"He had the best shark attack experience without it being a bad story," Chambers told KGTV.