An elderly woman fell and couldn't call for help. Her USPS mail carrier saved her life 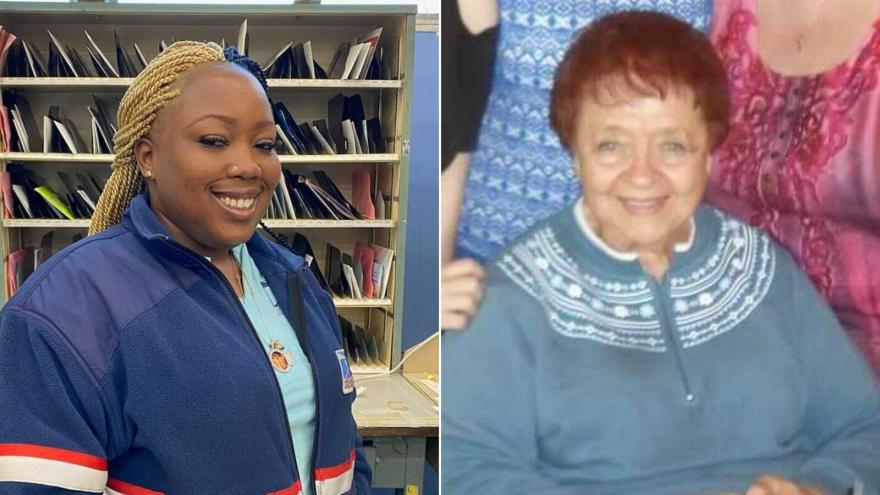 A USPS mail carrier in Chicago helped save the life of an elderly woman who fell and couldn't call for help.

(CNN) -- When a USPS mail carrier noticed an elderly customer had not picked up her mail in three days, she had an overwhelming feeling that something was wrong.

Shonda Lemon, 34, has worked as a USPS mail carrier in Chicago for eight years. She often greeted Helen Iwanski, 89, during her route. Although they exchanged few words, she said their relationship was sweet.

"I've always had a soft spot for the elderly," Lemon told CNN. "So, when I do come across elders, they just take a special place in my heart."

Lemon wrapped rubber bands around Iwanski's mail so she could grip it easily. And Iwanski randomly taped candy to her outgoing mail for Lemon as a gift.

"I just knew her to be a nice and considerate old lady, so when she would come to the door, I would check on her," said Lemon.

But on January 14, Lemon noticed Iwanski hadn't picked up her mail in several days. "It was out of the ordinary for her not to get her mail, especially with the rubber bands being on it," said Lemon.

She felt that something was wrong, so she decided to call the police for a well-being check.

When authorities were able to enter Iwanski's home, they found her lying on the floor for from a fall. It had been several days. She was admitted to Advocate Lutheran General Hospital in Park Ridge, Illinois, the same day, said her niece Mary Mason.

Lemon said she began to cry when an officer called to say they found Iwanski alive.

"I was very relieved because my heart was in my throat," Lemon said.

She could hear sirens leaving Iwanski's home as she continued her route in the neighborhood.

"I was just so overwhelmed that I just cried."

Iwanski's family told CNN that she stayed at the hospital for a week and is now recovering at a rehab facility. They are grateful Lemon was there at the right moment.

"She (Lemon) really does look out for people and cares about them," Mason, who said she typically helps her aunt with her with groceries and laundry, said, adding that her aunt called Lemon her "angel."

In a statement to CNN, USPS said it is proud of the actions Lemon took to help Iwanski.

"Postal Service employees know the habits of their customers and the rhythms of their communities, and are often the first to notify emergency personnel and render aid when something is wrong," USPS said in the statement. "Employees have been commended for going above and beyond the call of duty in a variety of situations, such as assisting lost children, getting help for sick or injured customers, spotting fires, and more. It's another example of the heroic actions taken by an employee in the neighborhood they serve."

Lemon said she's counting the days for when Iwanski is released from the rehab facility.

"Each person has an intricate part of your life," she said, "and you never know how important they be."