A suspect has been arrested and hostages released after an eight-hour standoff at a Minnesota bank, police say 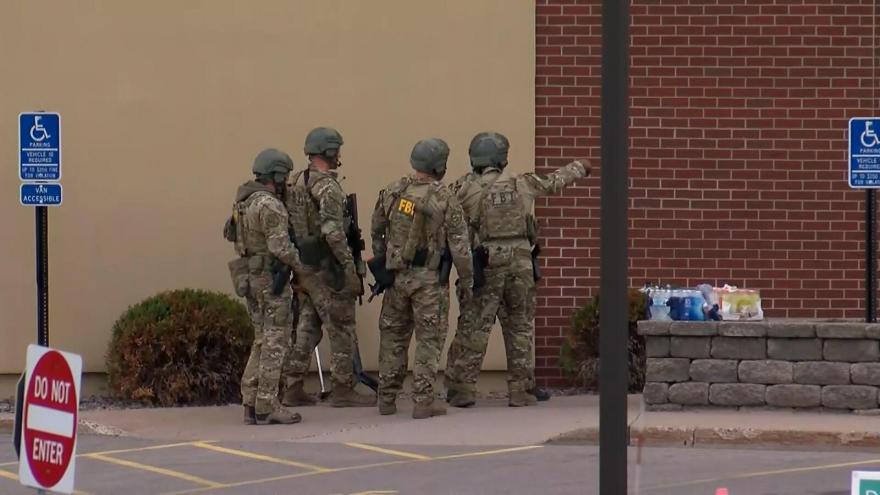 Authorities on scene of a hostage situation in St. Cloud, Minnesota, on Thursday, May 6, 2021.

(CNN) -- A suspect who held five people captive during an eight-hour standoff at a Wells Fargo bank in St. Cloud, Minnesota, has been arrested and will be charged with aggravated robbery, kidnapping and second-degree assault., authorities said.

It was a "peaceful resolution, the best possible outcome we could have had," said St. Cloud Police Chief Blair Anderson.

Four of the hostages were released and a fifth hostage "made a run for the door" right before the tactical units from the St. Cloud Police Department and the FBI "made a simultaneous entry and took the suspect into custody without incident," Anderson said. All of the hostages were bank employees according to police.

The hostages were uninjured and are safely at home, said St. Cloud Mayor Dave Kleis.

Police identified the suspect as Ray Reco McNeary. The suspect did not have a firearm and no firearm was found on the scene, the St. Cloud police said.

The Stearns County Attorney's Office told CNN that if the case remains in their jurisdiction, McNeary will be charged this afternoon.

Stearns County Attorney Janelle Kendall did not provide details on charges for McNeary, but said she had been in contact with the US Attorney's office about the "most appropriate place for charges to be brought."

St. Cloud officers were called to the bank around 2 p.m. CT Thursday for reports of a possible robbery in progress, St. Paul police said. The branch manager of the bank called police because there was a disgruntled male customer in the business and he was concerned for the safety of the employees and customers, Anderson said.

A short while later, police "received a panic alert indicating a bank robbery was in progress," said Anderson.

"When we got there, we discovered that several people had already fled the bank, about five bank employees remained and were being held hostage," Anderson said.

The motive was not known at the time of the press conference and, according to Anderson, police are still investigating whether the hostages were being held at gunpoint.

The chief also addressed a video that the suspect streamed lived on social media during the incident when asked by a reporter if it was "accurate to say he (McNeary) was taking some of the hostages' phones and then using that to go live on social media?"

"That's accurate to say, because it's already been placed out there on that demon, that social media demon. It made the job a little bit more difficult than it should have been, but it is what it is," said Anderson.

Local, state, and federal law enforcement officers provided assistance during in the standoff. Anderson praised the collaborative efforts of the teams involved saying, "I am extremely proud of the men and women, not only of the St. Cloud Police Department but certainly from the FBI as well."

Wells Fargo provided CNN with a statement that said in part, "We are incredibly relieved and grateful that the situation has been resolved with no physical injuries to any of our employees or customers."