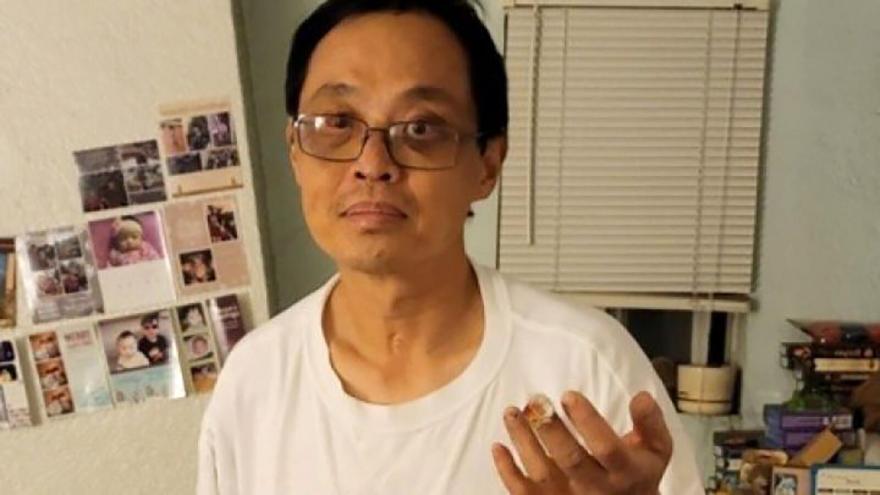 Matthew Leung was attacked at a bus stop in Rosemead, California, on Sunday, February 7.

(CNN) -- An elementary school teacher's aide was waiting for a bus in Rosemead, California, when he was brutally attacked on Sunday, suffering a severed finger, according to the Los Angeles County Sheriff's Department.

A man on a bicycle approached Matthew Leung, who is Asian-American, at a bus stop in Rosemead, a suburb of Los Angeles, just after 1 p.m. They exchanged hellos, but about 10 minutes later, the man, unprovoked, attacked Leung, said May Cun, Leung's colleague at Gates Street Elementary School.

Leung shielded his face with his hands during the attack and then he blacked out, Cun told CNN. A passerby found Leung bleeding on the ground and called for help.

Leung, 51, was taken to the hospital. He told CNN affiliate KABC that he saw his finger injured while on the ambulance.

"So when I go to the hospital the doctors see it and say oh no...so they cut it off," Leung told KABC.

The Los Angeles County Sheriff's Department does not have a suspect description, but the assault is under investigation. It's not clear if race was a factor in the attack, the sheriff's department said.

Rowena Quijano, who also works with Leung, said she doesn't know if race played a role.

"We just wanted to bring awareness to this so that everyone is aware and we could watch out for each other," Quijano said.

When Leung was a teenager, according to Cun, he was trying to catch a bus when he was hit by a car. That accident left him with slurred speech, a limp and seizures, she said. Leung now uses a cane to walk, she said.

Cun, Quijano and others started a GoFundMe page to pay for Leung's medical expenses, and donations have already exceeded the $35,000 goal.

"I'm just astounded by the amount of love and support he's receiving and the power of social media," Cun said. "I'm just speechless."

The outpouring is a reflection of Leung's decades of dedication to the school, where he works with transitional kindergarten students, Quijano said.

"He's so loved," she said. "He's such a kind, friendly, gentle, humble person. Yes, it's unfortunate that this happened, but he has touched so many lives. So many former students remember him, based on the comments on the GoFundMe site."

The last few weeks have seen a string of attacks against Asian and Asian-American people, though police have not confirmed that race has played a role in the assaults.

An 84-year-old man from Thailand died in late January after being attacked on his morning walk in San Francisco. Days later, a 91-year-old Asian man was violently shoved to the ground in Oakland's Chinatown.

In early February, a 64-year-old woman was robbed outside a Vietnamese market in San Jose, California. And in the same week, a 61-year-old Filipino man was slashed in the face on the New York City subway.

Since the Covid-19 pandemic began spreading in the United States, immigrant advocates have reported rising instances of xenophobic attacks against Asian people.

Stop AAPI Hate began collecting reports of racism and discrimination against Asian Americans in March 2020. Through the end of the year they received more than 2,800 firsthand reports of anti-Asian hate.

Other organizations have seen similar spikes.

From 2017 to 2019, the group Asian Americans Advancing Justice received less than 500 reported instances of hate against Asian Americans. But from February to December last year, there were about 3,000 incidents of hate cataloged by the group and others, they estimated.