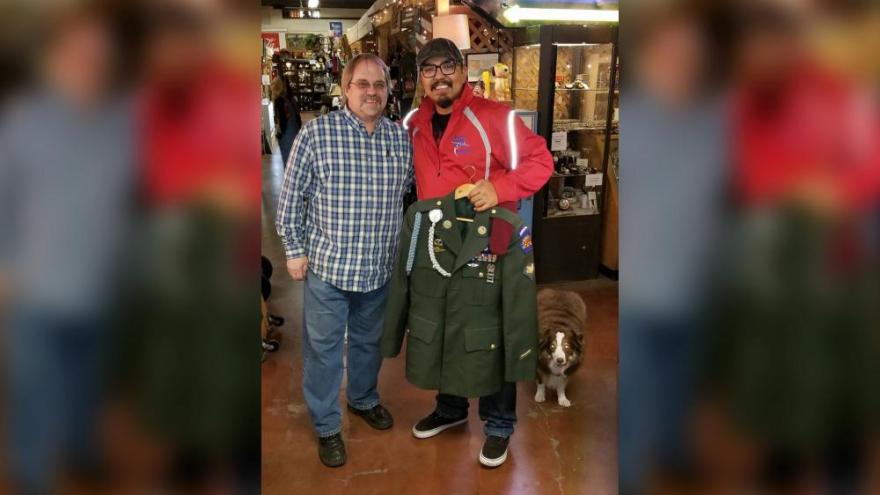 Three years after his Army uniform went missing, Xenos Lopez found his Army greens -- medals and all -- hanging in an antique shop.

(CNN) -- Moving from one side of Bakersfield, California, to the other shouldn't cause too much of a headache, but when Xenos and Angelica Lopez did, one very important piece of clothing went missing. Three years later, they found Xenos' army greens -- medals and all -- hanging in an antique shop.

Xenos Lopez served in the Army from 2004 to 2010, and had since hung up his uniform safely in a garment bag in his closet -- or so he thought.

"We were moving from one side of town to the other and sometime during the move my uniform disappeared," Lopez says.

He says he looked everywhere for it once they were settled in the new house, but he was unable to locate it. He tells CNN affiliate KERO that he suspects someone may have stolen the garment bag during the moving process.

On February 16, Lopez and his wife decided to browse some local thrift stores for a fun day out. After a full day of shopping, they walked into Mills Creek Antique Mall.

"I looked through the shop and when we got ready to leave, my wife points out my uniform," Lopez says. "I was shocked ... how did it get here? But I knew it was mine for sure."

"He was super kind, he said, 'It's yours, you earned it. Take it!' That was really cool of him," Lopez says.

Lopez plans to return the uniform to safe keeping and create a shadow box with the medals currently hanging on the garment.