Emergency declared as Arizona wildfire grows to 1,400 acres following evacuation of about 200 homes 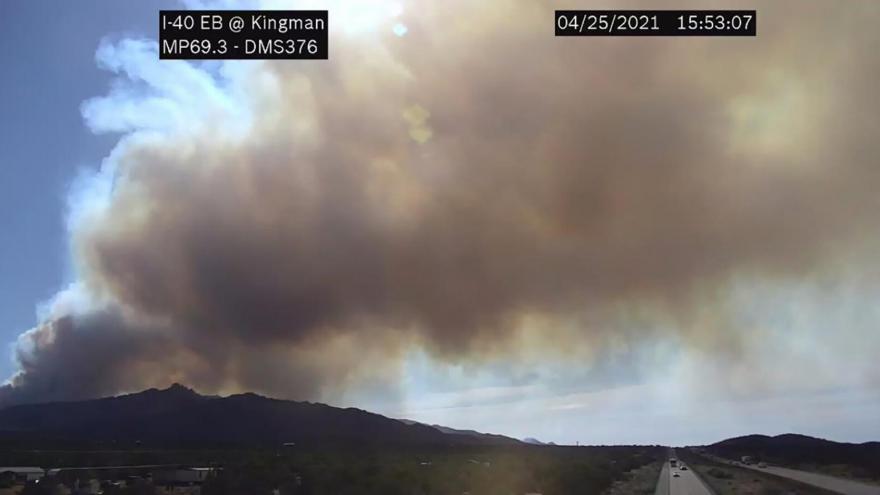 The Flag Fire near Pine Lake, Arizona, has prompted evacuation orders for about 200 homes, officials said.

(CNN) -- Officials declared a county emergency for the Flag Fire in Arizona after it grew from 600 to 1,400 acres Monday, according to the latest information from the Bureau of Land Management.

The fire, which was described by officials as "raging out of control" on Sunday, prompting the evacuation of about 200 homes in the Hualapai Mountains near Pine Lake, about two hours north of Phoenix.

"Mohave County Supervisor Buster Johnson has declared a County Emergency as a result of the Flag Fire in the Hualapai Mountains," Mohave County Communications Director Roger Galloway said Monday in a news release.

Inciweb, the nationwide incident information system, shows the fire is still under investigation after burning 1,400 acres.

One outbuilding has burned, an update from from the Pine Lake Fire District said.

"Fire area is receiving light rain, helping firefighters by moderating fire activity," the update said. "Fire remains active on the west side as it nears communication sites in the Hayden Peak and Potato Patch areas. Firefighters continue to work defensively in the area of Pine Lake, while aviation resources worked the western flank hampered slightly by strong gusty winds."

The Red Cross has set up a shelter for evacuees at Palo Christy Elementary School, according to the news release.