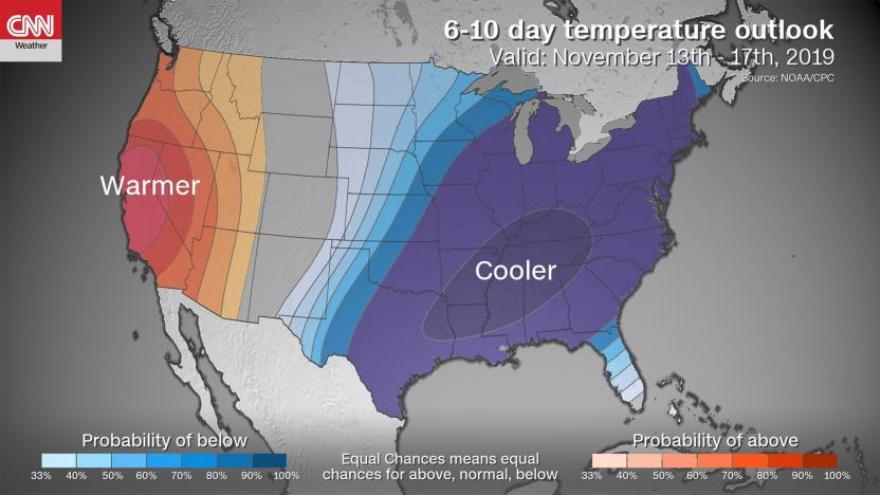 An Arctic blast is bringing a week of below freezing temperatures to parts of the eastern US.

(CNN) -- Winter is coming to the East Coast for the next week.

The next five to seven days generally are going to bring unseasonably low temperatures to the eastern two-thirds of the US, with a first chilly round hitting Friday and a second, colder Arctic blast coming later.

Friday's cold snap could bring below-freezing temperatures to some places.

The cold was already descending early Friday on New York, with wind chill expected to make it feel like temperatures were in the upper teens to mid-20s, according to the National Weather Service. Wind gusts in Boston are reaching 25 to 35 mph and will bring wind chills into the 20s as well, the NWS said.

Snow flurries are also expected Friday for downwind parts of the Great Lakes, CNN meteorologist Derek Van Dam said, adding that those flurries will make it Saturday to the Northern Great Lakes.

Temperatures are expected to rebound a bit in the East over the weekend, but colder air will be coming.

Temperatures will plummet first on Monday in the Plains, and then further east on Tuesday and Wednesday.

Cold-weather records could be broken

Starting Tuesday morning, record low temperatures are possible across Texas and Oklahoma, along with parts of the Ohio Valley.

By Wednesday, more than a dozen record lows could be set in the Deep South and the Gulf Coast, CNN meteorologist Taylor Ward said.

In parts of Mississippi and Alabama, highs on Wednesday aren't likely to rise out of the 30s. For those areas, that's more than 10 degrees colder than usual, even in mid-January.

Some afternoon temperatures Wednesday in the East could fall up to 30 degrees below average, making it feel more like January for many.