An alligator from Louisiana was discovered on a South Texas beach over 400 miles away, raising questions about how it got there 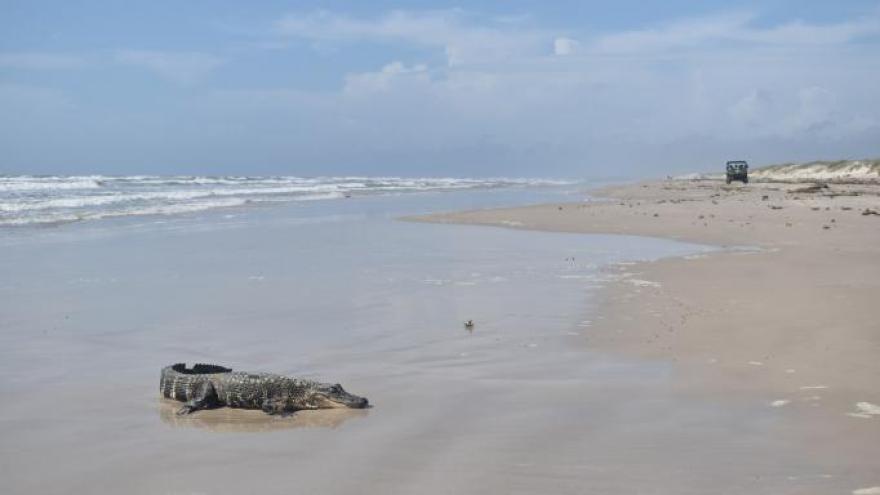 This American alligator was found on the beach in south Texas on May 24.

(CNN) -- When members of the National Park Service's (NPS) turtle patrol were scouting the South Texas shore for sea turtles, they spotted an unusual visitor -- an American alligator.

The alligator was discovered on the sandy Malaquite Beach on the Padre Island National Seashore in Corpus Christi on Monday. The reptile is thought to have floated across the Gulf of Mexico from Louisiana, as indicated by the notch of its tail and tag on its foot, according to park officials.

"We are kind of speculating that perhaps it was washed out during one of the flooding events in Louisiana," Kelly Taylor, Padre Island National Seashore public information officer, told CNN on Wednesday. "It had a significant amount of algae on it's back that leads us to speculate that it was floating in the Gulf for a while."

Alligators spend time basking in the sun which helps keeps the algae off, Taylor added, which makes them believe this reptile was in the water for quite sometime.

While it is unknown what flooding event might have brought the gator out to sea, Louisiana has been dealing with several bouts of torrential rain over the past two months that has lead to dangerous flash flooding events for the area.

Last week, Lake Charles received more than 12 inches of rain, according to the National Weather Service, marking the third most rainfall in a single day in the city's history and more rain fell than during either of the hurricanes in 2020. In April, the state also received several days of severe weather that brought a near-record amount of rainfall to New Orleans.

Park officials released an image of their unusual beach visitor on Tuesday, stating that they also believe this was a young alligator due to it's size. American Alligators are one of the largest reptiles in North America, according to Louisiana Department of Wildlife and Fisheries, and they can grow up to 13 feet in length.

This species is normally found in the coastal wetlands of the US Southeast, as far north as North Carolina and as far west as eastern Texas, according to The National Wildlife Federation.

"While alligators can tolerate salt water for a few hours or even days, they are primarily freshwater animals, living in swampy areas, rivers, streams, lakes, and ponds," according to the National Oceanic and Atmospheric Administration website.

Padre Island National Seashore, located in South Texas, is the longest stretch of undeveloped barrier island in the world, according to NPS. It separates the Gulf of Mexico from the Laguna Madre, one of a few hypersaline lagoons in the world.

"As a fresh water species being in salt water we can make assumption it was probably dehydrated," Taylor said. "It is received fluids but that is also standard."

She added that the alligator seemed to be in good shape but out of its element. It is now being treated and evaluated at a local rehabilitation center.

The more commonly known reptile that this park deals with are sea turtles. They have a dedicated team that monitors and protects the animals as they come on shore to nest and lay eggs. Each year, thousands of visitors come to the park to watch as the hatchings make their way out to the Gulf of Mexico.