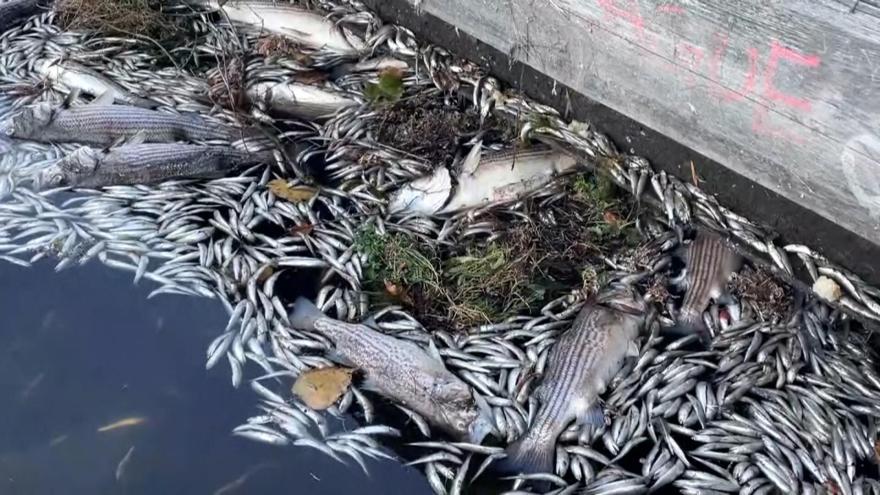 Dead fish floated this week on Oakland's Lake Merritt and an algae bloom there and elsewhere in the San Francisco Bay Area has killed thousands of fish.

The bloom was detected in late July in the Oakland and Alameda areas, and dead fish have since washed ashore in the bay as well as at Oakland's Lake Merritt, California fish and wildlife department spokesperson Jordan Traverso said.

"It's estimated that 10,000 yellowfin gobies died ... as well as hundreds of striped bass and hundreds of sturgeon," and the bloom probably is impacting all aquatic species in the area "to some degree," Traverso said.

The situation escalated early this week at Lake Merritt, where numerous dead fish began lining the shores, city officials said. Parts of the lake's shoreline were nearly covered in the carcasses of tiny fish, with more sizable fish scattered about, images from the city and CNN affiliates KPIX and KGO showed.

A city-hired crew removed 1,200 pounds of fish from the lake's shores Wednesday, continued shore cleanup Thursday, and will remove floating material from the lake's surface into the weekend, the city government said online. It acknowledged unpleasant odors around the lake, abutted by a well-visited park and urban surroundings.

"You can smell -- it's not like, awful-awful, but there's definitely a stench," Mitchell Manburg, who was exercising in the area, told CNN affiliate KPIX this week, before the cleanup started.

Algae blooms and dead fish were reported not only along the Oakland and Lake Merritt shorelines, but also "for many miles to the north and south along the coastline," Oakland's release reads.

Precisely what killed the fish wasn't immediately known, but it's "likely related to dissolved oxygen levels and/or toxins produced by the algal bloom," Traverso said.

"Generally, increased inputs of nutrients like nitrogen and phosphorus (from fertilizers and human or animal wastes), low water flows, stagnant water, increased intensity and duration of sunlight, and sustained high temperatures create the ideal conditions for these blooms," the city's online post reads.

"Current research suggests that the rising temperatures and changing precipitation patterns caused by climate change are a catalyst for their growth," the post continued.

Algae are a natural part of the ecosystem, but when they are overabundant the compounds they release can accumulate to levels harmful to wildlife and people, the California Water Quality Monitoring Council says.

The state fish and wildlife department is working to sample strategic locations to "verify the extent of the harm to fish and aquatic species," Traverso said.

Oakland's public works department and its water board detected "low levels of contaminants associated with harmful algae blooms" in May, the city said. The city then posted signs warning lake visitors that harmful algae might be there, and to not touch the water, it said.