An Albuquerque man found $135K next to an ATM. Instead of walking away with it, he called police 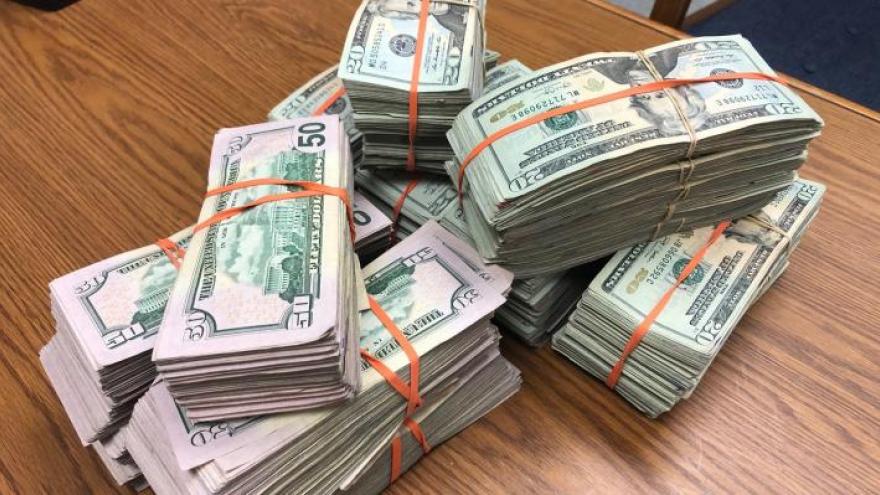 Nuñez described finding a "foot-long stack" of cash next to the ATM.

(CNN) -- Jose Nuñez Romaniz was on a mission to buy socks for his grandfather. He'd just helped him find the right ones online, after the elder man had no luck finding them in stores.

The 19-year-old Nuñez just needed to deposit money into his bank account to make the online purchase. When he tried, he made an astonishing find -- and what he did next has earned him praise and a bit of fame in New Mexico's most populous city.

Nuñez drove to an ATM outside a Wells Fargo bank branch Sunday morning just two minutes from his Albuquerque home to make his deposit.

As he pulled his truck alongside the machine, he spotted a clear plastic bag on the ground. It was a "foot-long stack" of $50 and $20 bills, he said.

"I didn't know what to do. I was, like, dreaming," Nuñez told CNN. "I was just in shock. I was looking at myself and just thinking, 'What should I do?'"

Nuñez said he never considered keeping the cash -- but all sorts of wild thoughts raced through his mind. Was this some kind of trick? Was someone going to pull up behind him and kidnap him?

With the bank closed on that Sunday, Nuñez called Albuquerque police. Two officers arrived, and the teenager handed over the money.

The officers counted the cash back at their station: It totaled $135,000.

Albuquerque police understand the money was mistakenly left outside the ATM by a bank subcontractor that was meant to supply the machine with cash, Officer Simon Drobik said.

"This money could have made an incredible amount of difference in his life if he went down the other path, but he chose ... the integrity path and did the right thing," Drobik, a spokesman for the Albuquerque police, said.

When asked for comment about Nuñez's actions Thursday, Wells Fargo spokesman Tony Timmons said he would defer to the vendor that services the ATMs.

CNN has left a message with that vendor, seeking comment.

Nuñez, a college student who lives at home and helps his parents take care of his two younger siblings, said his family comes from "humble beginnings," and that no one in his family has ever been around or seen that kind of money.

Nuñez said that as he stared at the cash, waiting for police officers to arrive, he could hear the lessons of his parents in his head.

"My parents always taught me to work for my own. Stolen money would never last you any time," Nuñez recalled his mother and father teaching him.

And for Nuñez, who comes from a tight-knit Latino family, there was an infamous guiding force hovering over him to be well-behaved.

"I had my mom's voice and her 'chancla' in the back of my head," Nuñez said. "La chancla" is a reference to an often real, often humorous threat of a flip-flop spanking to keep children on the right path.

Businesses have feted Jose with some gifts

City officials feted him Thursday in a ceremony outside Albuquerque's police academy.

The police chief presented him with a plaque, and has invited Nuñez -- a Central New Mexico Community College student who intends to study criminal justice -- to apply for a job as a public service aide at the police department, Drobik said.

Albuquerque ESPN Radio 101.7 FM presented him with some signed sports memorabilia that the station had -- including a football autographed by former NFL and University of New Mexico linebacker Brian Urlacher.

The radio station threw in six season tickets for UNM football, said station president Joe O'Neill, who had heard about Nuñez's story from a police acquaintance.

And at least three local businesses presented Nuñez with $500 each, with one of them -- a restaurant -- adding a $100 gift card, O'Neill said.

"It's the coolest story. ... it's unbelievable what the kid did," O'Neill said.

In an interview with the radio station later Thursday, Nuñez thanked businesses and officials who were at the event, and told listeners how Sunday unfolded. He recalled police arriving "in like five minutes" after he called.

And yes, he did finish what he'd started for his grandfather.

"I went back home and finished my online shopping," he said.

His mother is proud

Nuñez's parents immigrated from Mexico in the late 1990s. They once worked in farm fields picking onions. His father also spent years working as a dishwasher, cook and in construction. Now the family operates a small mattress sales business.

Nuñez just finished his first collegiate year. His childhood dream is to work as a crime scene investigator.

Nuñez said he called his mother right after he contacted police Sunday. Albuquerque police officers went to the family's home and praised him to his parents.

"She told me I did the right thing and that she was proud of me," Nuñez said. "She called me and almost started crying."