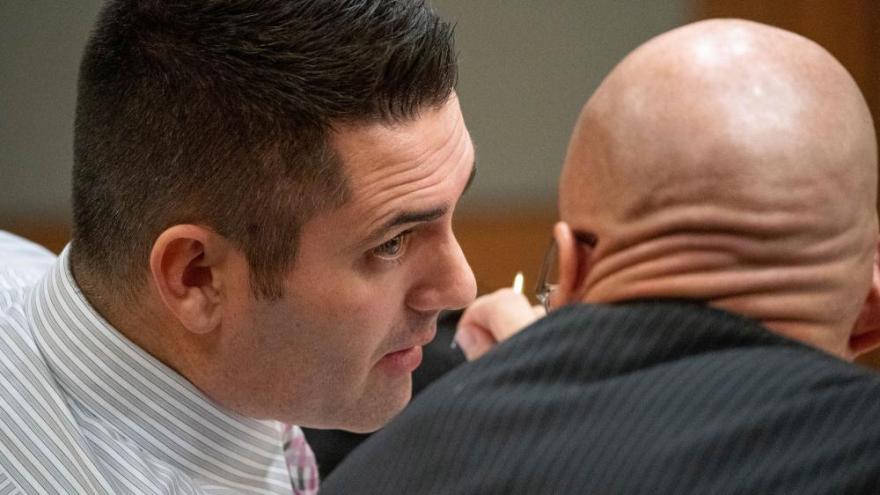 Seth Lookhart, a former dentist who was filmed extracting a patient's tooth while standing on a hoverboard, has been sentenced to 12 years in jail, according to a statement from the Alaska Department of Law. Full Credit: Loren Holmes/Anchorage Daily News via AP

(CNN) -- A former dentist who was filmed extracting a patient's tooth while standing on a hoverboard has been sentenced to 12 years in jail, according to a statement from the Alaska Department of Law.

Seth Lookhart, 35, was convicted on 46 felony and misdemeanor counts in January, including medical assistance fraud, scheme to defraud, illegal practice of dentistry and reckless endangerment.

Anchorage Superior Court Judge Michael Wolverton sentenced Lookhart on Monday to serve 20 years in jail with eight years suspended, the statement said. That means Lookhart will serve 12 years behind bars. He also cannot practice dentistry during his 10 years of probation.

Lookhart apologized for his actions while reading from a prepared statement.

"Looking back, I can't say exactly when I began to go off course," he said, CNN affiliate KTUU reported. "While I do not doubt that I was able to render care and alleviate the pain to many people who were in dire need, I also know that I could have and should have maintained better discipline and focus while serving a patient base I came to love."

He also said he had changed, and asked the court to reconsider.

"I know I would be my best self and in turn able to serve my family and the community best if I were granted the privilege and the hope of a renewed lease on life, practicing dentistry and living among those that I love," Lookhart said.

At the sentencing, Judge Wolverton said, "I think what you did was so outrageous, narcissistic and crazy. So I forgive you for all that, but there's obviously a high-priced lesson that you're going to have to learn."

At Lookhart's trial earlier this year, Wolverton called the evidence against him "simply overwhelming," adding that it was "often supported, and often in excruciating detail, by Lookhart's own texts, photos and videos."

Hoverboard incident was just one of part of the case

A lawsuit filed by the state in 2017 charged Lookhart with "unlawful dental acts," saying his patient care did not meet professional standards. He also billed Medicaid for procedures that were either unnecessary or not properly justified.

His case gained widespread attention over an incident described in the lawsuit, in which he extracted a tooth from a sedated patient while riding a hoverboard, filmed the procedure and then sent it to several people.

In at least one conversation, Lookhart joked that performing oral surgery on a hoverboard was a "new standard of care," the lawsuit said, citing phone records.

The judge said the hoverboard incident was not the most serious aspect of the case.

Lookhart was found to have performed anesthesia "thousands of times without training or consent, on patients outside his scope of training and expertise, while stealing money from Medicaid and embezzling from his bosses," the statement from the Department of Law said.

Patients at the January trial also testified that they had woken up to find that Lookhart had worked on or removed the wrong tooth, or that he had performed a different treatment than what they had agreed to, KTUU reported.

"This is not an economic crime," Eric Senta, an assistant attorney general with the Department of Law, said at the sentencing. "This is not a case where the court is sentencing someone who stole $2 million. Lookhart hurt people, vulnerable people, disabled children."

Lookhart's attorney, Kevin Fitzgerald, argued that his client had already faced consequences for his actions.

"He's lost a business, honor, your court is well aware there are civil suits, there's been negative publicity and the likely loss of his license, which, again, is pending, but the state's position is to revoke it permanently," Fitzgerald said at the sentencing.

Lookhart is scheduled to start serving his sentence December 7, Senta confirmed to CNN.

Lookhart's co-defendants -- his office manager Shauna Cranford and his corporation, Lookhart Dental LLC -- are scheduled for sentencing later this week, the statement said.

Prosecutors are pushing for the court to order Lookhart to pay more than $2 million "to compensate for the funds that Lookhart fraudulently obtained from the Alaska Medicaid system and embezzled," the Department of Law statement said.