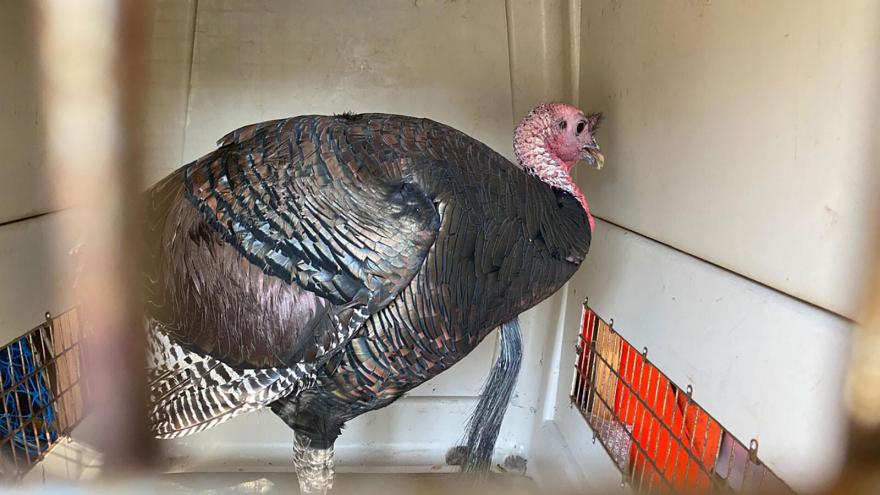 Gerald, an aggressive turkey who liked to attack humans, after his capture in Oakland, California

(CNN) -- A neighborhood in Oakland, California, can rest easy now that a turkey nicknamed "Gerald" was safely relocated to nearby hills.

Estimated to be around 20 pounds, Gerald had been causing problems in the Grand Lake neighborhood for months, attacking dozens of people and ultimately leading to the closure of nearby Morcom Rose Garden, an 8-acre municipal garden that was his favorite stomping grounds.

Rebecca Dmytryk, a wildlife expert and founder and director of Wildlife Emergency Services based in the Monterey Bay area, was hired to humanely capture Gerald in the park after attempts by the city were unsuccessful.

After observing the bird a few weeks earlier, she and her husband, Duane Titus, arrived at the rose garden on Thursday to make their first attempt at capturing the wayward bird.

"When we got there, there were no turkeys in sight," Dmytryk told CNN. "We worried we missed him, and he'd gone somewhere else."

That soon changed. Dmytryk and Titus spotted Gerald along with some other turkeys in a redwood grove near an overlook in the park. According to Dmytryk, Gerald was eying a family with children, and possibly in attack mode. The family wasn't supposed to be there as the park has been closed since May 23 due to the rampaging turkey.

Stocked with berries and carrying an air-powered net gun, Dmytryk moved to disrupt the turkey's advance.

"I quickly threw the blueberries, and I got (Gerald's) attention. I got the attention of another turkey with babies at her side and they all started coming in very excitedly eating the food, which was great," Dmytryk said, "But then, the net gun wasn't working properly."

Titus went back to their truck. Dmytryk, meanwhile, continued to distract Gerald with the berries.

Just to see if there would be a change in the bird's behavior, Dmytryk switched up her movements -- and it worked. The bird became seemingly more aggressive. Thinking on her feet, she went into victim mode, all to lure Gerald even closer.

"And I realized -- oh, OK, you're thinking I might be a victim. All right, I'll play into it," the wildlife expert said. "So I hunched over a little bit and I brought my arms into my chest, got a little smaller and acted afraid."

The bird came closer, and Dmytryk waited for her moment to make a move. In an instant, she went to grab Gerald in the featherless area of his neck and shoulders.

"And just within a millisecond, I had my arms wrapped around him to keep those powerful wings folded in. You kind of hug them -- not tightly, because they have to move their sternum to breathe."

Within minutes, Titus was back on the scene, and they both managed to get Gerald in his carrier. Fish and Wildlife arrived soon after, and they escorted the couple and the turkey to his new home. The city has since reopened Morcom Rose Garden.

Gerald was tagged and released in an uninhabited area in Orinda, miles away from the rose garden, Dmytryk said. She added that she had seen other turkeys in the area and was ultimately a better place for him to be.

"Thankfully, it was a win-win for everybody."

The lead up to capturing Gerald

Ann Dunn, director of Oakland Animal Services, was one of the first people to start working on a solution for Gerald, receiving calls about the animal since May.

Dunn estimated that between fielded calls, and various online posts, there have been more than 50 incidents of the bird aggressively attacking people.

"The circumstances were such that it just doesn't feel right to have that turkey here, to have the possibility of the turkey seriously injuring somebody - especially a child," Dunn told CNN. "And the more research I did the more I came to understand that this behavior was extreme, and we had to do something about it."

Oakland Animal Services' jurisdiction revolves mostly around shelters and house pets like dogs and cats, so this was an incredibly unusual circumstance, Dunn said. Turkeys are handled by Fish and Wildlife.

Dunn said that initially it looked as if the only outcome due to various restrictions on wildlife was to euthanize Gerald. But after public outcry, it was clear a significant portion of the public wanted to see a positive outcome, including Dunn herself.

CNN affiliate KGO reported that Grand Lake residents secured more than 6,000 signatures on a petition asking Fish and Wildlife to relocate the turkey instead.

Fish and Wildlife granted permission for the bird to be relocated in July. The city tried but was unsuccessful at capturing the turkey, which led to Dmytryk being hired to facilitate the relocation.

Both Dmytryk and Dunn stress that one of the most likely factors in Gerald's aggression was habituation due to people feeding the animal -- a good example of why one should never feed wildlife, especially as people turn to nature as an escape during the pandemic.