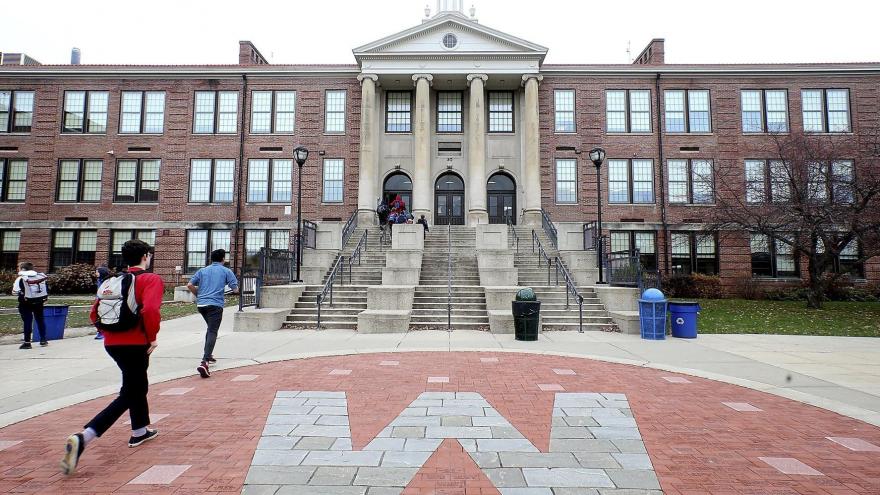 (CNN) -- An African American security guard in Wisconsin who was fired for asking a student not to call him the n-word is celebrating his reinstatement.

Interim Madison Metropolitan School District Jane Belmore decided to rescind Marlon Anderson's termination, the Madison Teachers Inc., a union representing teachers and other staff, said in a statement on Monday. Anderson will be placed on paid administrative leave while a plan is finalized for him to return, the union said.

"I'm back!!" Anderson, who worked at Madison West High School, said in a Facebook post less than a week after he was fired.

"Thank you to the 1,000 plus students for allowing your voices to be heard and to all the people from across the globe for reaching out to my family," he wrote.

Anderson told CNN in an interview last week he was called in to help an assistant principal escort a student from the school grounds on October 9. The student was resisting, yelling and pushing the principal. Anderson called for backup, and the student yelled expletives at him, including the racial slur, Anderson said.

At first, Anderson said he asked the student to stop calling him that, without saying the word. But the student continued to call him variations of the word.

That's the comment that got him fired on October 16.

"We've taken a tough stance on racial slurs, and we believe that language has no place in schools,' Madison Board of Education President Gloria Reyes said in a statement then.

Anderson said the Madison district "just wants to say you can't use this word, period."

"These policies are hurting the kids and staff. Without context this isn't helpful; it's more hurtful," he said.

Reyes said in a statement on Monday she had asked the superintendent to rescind Anderson's termination and review the issue on the use of racial slurs in school.

"As we experienced a series of racial slurs last school year, we had to take a stand that we would unequivocally protect students from harm," she said.

Belmore could not be reached late Monday.

Anderson had worked for the district for 11 years. His two sons attended Madison West High School; one is a senior and the other graduated from the school.

The community rallied around the former security guard.

Anderson said in the Facebook post he will continue to work at the Boys & Girls Club during negotiations for his return to the district.

He thanked everyone from his colleagues at Madison West to his wife and the union and Reyes for their support and advocacy.

Anderson wrote: "Now we have to address the policy!! God is good!!!!"