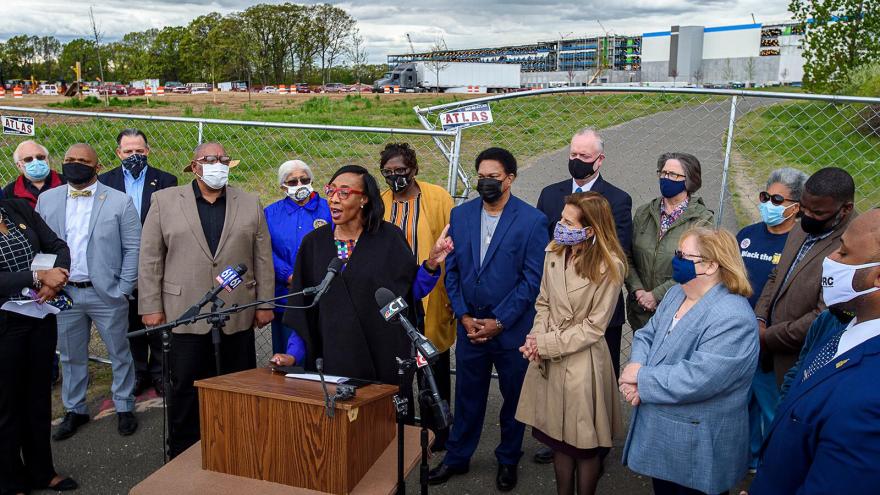 State and local leaders, together with the NAACP, speak at a news conference on May 7, 2021, in Windsor, Connecticut.

(CNN) -- After yet another apparent noose was discovered at the construction site of an Amazon fulfillment center in Windsor, Connecticut on Wednesday, local NAACP officials and town leaders voiced their outrage with Amazon and law enforcement authorities for not taking the proper precautions before workers returned earlier this week.

The latest discovery of a noose at the sprawling, 3.5 million square foot building now brings the tally up to eight. The site had previously been shut down over the weekend so that cameras and other safety precautions could be put in place, CNN previously reported.

"This is a complete joke. Smoke and mirrors, a bunch of nonsense that has been said to us, said to the community, and communicated to the press," Scot X. Esdaile, president of the Connecticut NAACP, said Wednesday afternoon. "There's no way this should be happening in Connecticut in 2021. There's no way."

Standing alongside Esdaile, town councilwoman Nuchette Black-Burke announced that town leadership would launch a "pressure campaign" to have Amazon keep the site shut down "until our quality of life here in the small town of Windsor comes back to normal."

"We are frustrated beyond words," Windsor Mayor Donald Trinks added.

According to town police chief Donald Melanson, however, Amazon will be reopening the site Thursday after it was closed down again on Wednesday following the discovery of the latest noose. An Amazon spokeswoman declined to provide CNN further comment on when the site will be reopened.

"Hate, racism or discrimination have no place in our society and are certainly not tolerated in any Amazon workplace — whether it be under construction like this one, or fully operational," company spokeswoman Nikki Forman said in a statement to CNN. "We will continue to work with all levels of law enforcement as well as our development partners, to hold the perpetrators accountable and ensure that all members of our community feel valued, respected and safe."

Before workers came back to work this week, surveillance cameras were placed at all access points, stairwells, and on each floor, the police chief said Wednesday, conceding that it would not be possible to cover the entire building given its size. Safety precautions also include having five officers stationed at the site with the private security Amazon had hired.

The department, working alongside the FBI and state police, are currently looking through surveillance footage and pursuing investigative leads, he said.

The eighth noose was found "mixed in with and entangled with electrical cords," which had "not been used for more than two weeks and were being stored on a pallet amongst other electrical equipment on the floor," according to a police department press release Wednesday.

The worker who found the noose immediately reported it to authorities, the release states.

"This one was clearly a noose," Melanson noted during the press conference Wednesday, adding that it remains unclear when it was originally placed. In previous statements, the department had said some of the seven ropes "could be interpreted as nooses."

"Right now we have no workers that have come forward to say they feel threatened by this individual, by the nooses that have been displayed," Melanson continued. He said identifying a specific group that's being targeted would help advance the investigation forward. The chief said he believes "in all likelihood" the perpetrator is a worker at the construction site, noting that it would be unlikely for someone to get past security when the site is closed at night.

"No one would feel safe in an environment like that. And they're very scared to come back to work, and they were looking forward to getting off the site today," Esdaile told reporters. "They said that they know certain individuals, the way that they look at them, the way that the treat them on the site makes it very very uncomfortable to work on the site."

Amazon and the chief himself addressed all workers onsite Wednesday following the discovery, Melanson said.

Local NAACP officials have yet to meet with the workers as of Wednesday afternoon, according to Esdaile.

Governor Ned Lamont on Wednesday said the nooses are a "racist provocation of the worst type," during a press briefing Wednesday.

"I thought we were behind this. In this society, certainly in this day," Gov. Lamont said, responding to questions about the incident.

"I'm talking to Amazon," Lamont continued. "We're doing everything from a security point of view, everything we can from a law enforcement point of view, but I can't change people's hearts, and it just breaks my heart that this is still going on."