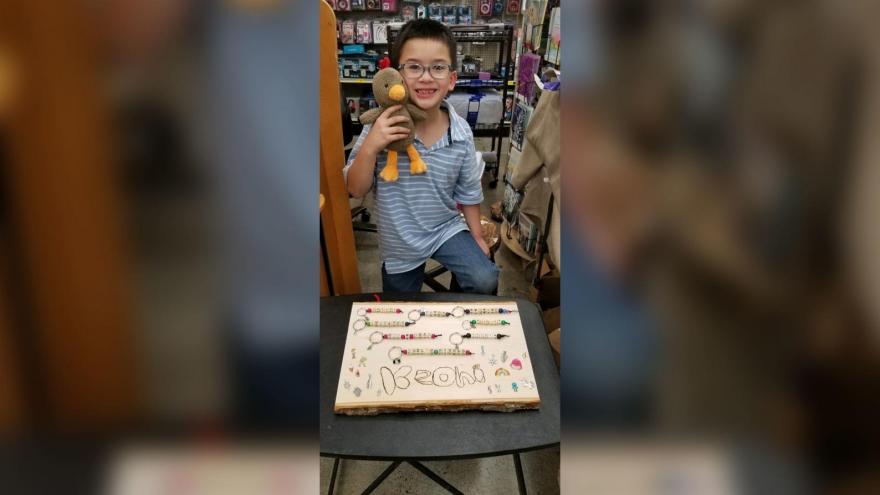 Keoni raised over $4,000 by selling his handmade keychains.

(CNN) -- You may have heard of celebrities or multibillion-dollar companies donating money to cover students' lunch debt. But Keoni Ching from Vancouver, Washington, is just your normal 8-year-old who wanted to help his schoolmates.

With his handmade key chains that go for $5 each, Keoni raised $4,015 to erase the lunch debt of students from his school and six others.

It all started because Keoni wanted to do something special for "Kindness Week" at his school, Benjamin Franklin Elementary. With his mother, April, and father, Barry, by his side, Keoni thought about projects that would truly reflect kindness.

Keoni was ultimately inspired by San Francisco 49ers player Richard Sherman. The cornerback, who previously played for the Seattle Seahawks, donated more than $27,000 to cover students' lunch debt. Keoni, for the record, is a Miami Dolphins fan, he said.

Keoni said he decided to make key chains because, "I love key chains. They look good on my backpack."

Once word of Keoni's key chains and his heartwarming cause got out, people from all over the country started sending in their requests for one of the custom key chains.

"We have sent key chains to Alaska, Rhode Island, Minnesota, Arizona, all over the country," April Ching told CNN. "There was one lady who said she wanted $100 worth of key chains so that she could just hand them out to people. ... There were several people who bought one key chain and gave (Keoni) a hundred bucks. It was absolutely amazing how much support the community showed for his whole project."

With the help of not only his parents, but also his grandparents, Keoni made and sold more than 300 key chains.

Keoni delivered the $4,015 check to Franklin Elementary last week. Of that amount, $1,000 will go to the school to pay off the $500 lunch debt and for any future debt incurred. The rest will go to six other nearby schools, which will get $500 each to clear their own lunch debts.

"Lunches here are about $2. But if you have two or three kids and for whatever reason, you've missed (paying for) a week of lunch or breakfasts, that adds up pretty quickly," Franklin Elementary's Principal Woody Howard said. "This type of a gift takes a little bit of pressure off of your family."

School lunch debt is an increasing problem in the US. In the 2017-2018 school year, 75% of school districts reporting to the School Nutrition Association had unpaid student meal debt. The median amount of unpaid meal debt per district has risen by 70% since the 2012-2013 school year, according to SNA.

Stories of children being lunch shamed grabbed the nation's attention last year. A boy from Ohio had his lunch taken away on his birthday because of an unpaid balance. A school in Rhode Island said it would serve only sun butter and jelly sandwiches to kids with lunch debt.

The outrage surrounding these stories prompted many states to pass laws that ban the action of denying a hot meal to students with unpaid lunch balances.

Keoni doesn't know much about the politics of America's lunch debt problem, but one thing he knows is this:

Helping others is important because "it just makes the world a better place," Keoni said.