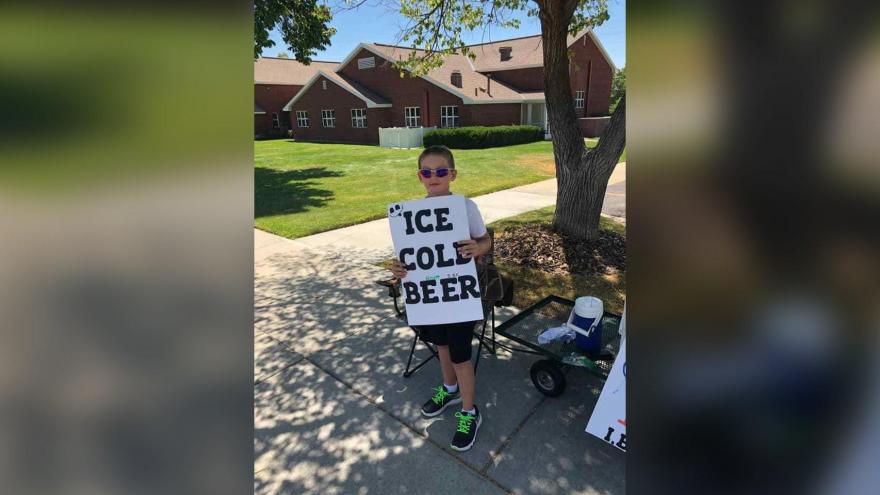 Alexis Parker was just looking for a way to get her son out of the house when this business idea hit her.

(CNN) -- Everyone loves a lemonade on a hot summer day, but 11-year old Seth had an even better idea.

He decided to set up a stand advertising "ICE COLD BEER."

This quickly caught the attention of his neighborhood in Utah. So much so, that the Brigham City Police Department received three reports about the business operation.

But when officers they arrived on the scene on Tuesday, all they found was a savvy salesman.

"Quite honestly, once our officers got there they found it quite ingenious," Lt. Tony Ferderber told CNN.

After all, the evidence was right in front of them: If you look closely enough you can see a tiny "root" written above "BEER" on his sign.

Of course, mom and dad helped with the marketing campaign.

"What better way to get peoples' attention?" said his mom, Alexis Parker.

Seth said he was happy when the police stopped by his stand and the officers were sure to buy a bottle from him, according to Ferderber.

Parker reports business has been doing well since the police department shared pictures of Seth on its Facebook page.

The root beer stand will stay open until the school year begins, and Seth and his mother are currently thinking up new ways to improve their business model.

In fact, they have expansion plans: They hope to bring the stand to towns near Brigham City very soon.