Takeaways from Day 2 of the Amy Coney Barrett confirmation hearings 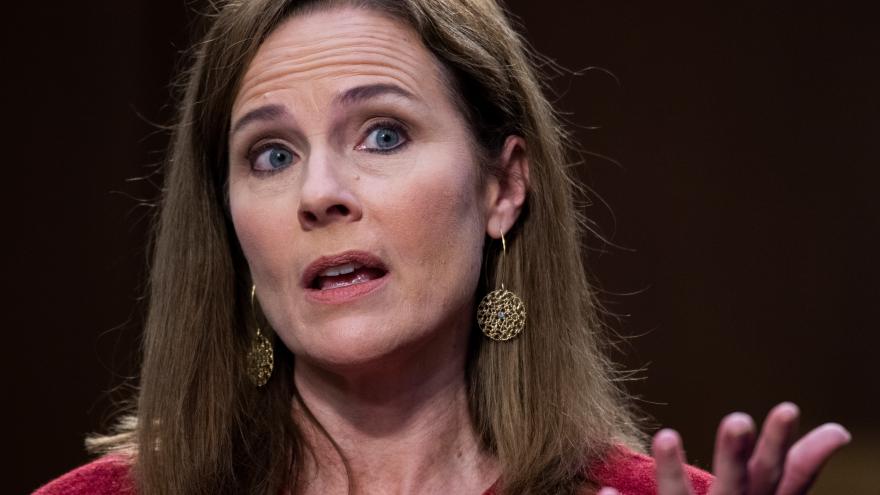 No one can recuse Amy Coney Barrett from a Trump election case but herself.

(CNN) -- Supreme Court nominee Amy Coney Barrett declined to preview how she would rule on potential cases as she faced questions from the Senate Judiciary Committee on Tuesday, seeking to portray herself as an independent judge without an agenda.

"I've made no commitment to anyone, not in this Senate, not over at the White House, about how I would decide any case," said Barrett.

Barrett, who would replace the late liberal Justice Ruth Bader Ginsburg, said Tuesday that she shared the same judicial philosophy as the late conservative Justice Antonin Scalia, who she clerked for in the 1990s and pioneered the practice of adhering to legal text and the original intentions of those who drafted the Constitution. But she made clear to distinguish herself from her mentor.

Here are some takeaways from the first day of questioning.

Barrett declined to preview her views on abortion and Roe v. Wade

Barrett repeatedly declined to give her views on high-profile, contentious issues like abortion rights and the constitutionality of the Affordable Care Act. She was repeatedly asked about her views of Roe v. Wade, the 1973 landmark case establishing a constitutional right to abortion, and Planned Parenthood v. Casey, which reaffirmed its central holding in 1992.

"I don't have any agenda," said Barrett. "I have no agenda to try to overrule Casey. I have an agenda to stick to the rule of law and decide cases as they come."

"I will obey all the rules of stare decisis," she later added, referring to the principle of adhering to past cases.

After posing a series of questions on the Supreme Court's abortion rulings, Sen. Dianne Feinstein of California, the panel's top Democrat, said it was "distressing not to get a straight answer" from Barrett.

Says she's 'not hostile' to Obamacare, but doesn't elaborate on upcoming case

Barrett also rejected Democratic senators' questions on the Affordable Care Act, citing Ginsburg's response to answering hypothetical questions during her hearing in 1993. "No hints, no previews, no forecasts," said Barrett.

Democrats, however, were undeterred, repeatedly raising the upcoming case and warning the law is in danger. Illinois Sen. Dick Durbin put up a chart showing state by state how many Americans would lose their insurance if the court terminated the 2010 health care law after it hears a case on November 10.

Chief Justice John Roberts and the court has twice ruled to uphold the law. But Republicans in Congress have since stripped out the individual insurance mandate, a component that Roberts deemed a tax that was crucial to the law's constitutionality. In 2017, Barrett wrote that he had "pushed the Affordable Care Act beyond its plausible meaning to save the statute."

Barrett acknowledged on Tuesday that she did "critique" Roberts' reasoning, but attempted to assure Democrats by saying that the court's upcoming case concerns a different legal doctrine known as severability, or whether the entire law can stand if one part of it is deemed illegal, even though the Trump administration is seeking to strike down the entire law.

"I am not hostile to the ACA," she said.

"I am not here on a mission to destroy the Affordable Care Act," Barrett added later on. "I'm just here to apply the law and adhere to the rule of law."

Iowa Republican Sen. Chuck Grassley directly asked Barrett if she had committed to the President "or anyone else" that she would vote to take down the Affordable Care Act if confirmed to the court.

"Absolutely not," she responded. "I was never asked, and if I had been, that would have been a short conversation."

Republicans push back against Democrats on Obamacare

Judiciary Committee Chairman Lindsey Graham used his opening statement to defend the Republicans' opposition to Obamacare, a day after Democrats highlighted their constituents' reliance on the law for their health insurance.

"If it were up to me, bureaucrats would not be administering health care from Washington, people in South Carolina would be running health care," said Graham, who is running for reelection in a close race. "The difference between analyzing a lawsuit and having a political argument is fundamentally different."

Grassley said that Democrats "misrepresent or claim to know" Barrett's views on the constitutionality of the 2010 health care law, but are "peddling" a "total fiction" while "painting" Barrett as "heartless" and "on a mission to scrap the health care law."

"Not only is Judge Barrett a mother of seven, she has children with preexisting medical challenges of their own," said the Iowa Republican. "No one on this committee, or anyone, has any right to suggest that she doesn't care about access to health care or protection for the vulnerable."

Barrett did not commit to recusing herself from a potential Trump v. Biden case

Last month, Trump said he thought the election would "end up in the Supreme Court," adding that "it's very important that we have nine justices."

Vermont Democratic Sen. Patrick Leahy asked ‪Barrett if she would commit to recusing herself from any case related to the November elections. She declined.

"I commit to you to fully and faithfully applying the law of recusal, and part of that law is to consider any appearance questions," said Barrett. "I will apply the factors that other justices have before me in determining whether the circumstances require my recusal or not, but I can't offer a legal conclusion right now about the outcome of the decision I would reach."

Barrett later added: "I certainly hope that all members of the committee have more confidence in my integrity than to think that I would allow myself to be used as a pawn to decide this election for the American people."

Barrett described the personal toll of the nomination process

While Barrett did not provide a preview of how she would rule on potential cases, she openly discussed her personal life and the nomination process. She noted her family owns a gun, that she plays the piano and described her decision with her husband Jesse to adopt two children from Haiti and raise them along with her other five children.

In response to other questions, she also called racism and discrimination on the basis of sexual preference "abhorrent," and recounted watching the video of the police killing George Floyd with Vivian.

"We wept together in my room," she said.

Barrett also gave a surprisingly candid response to a question from Graham on how it felt to be nominated for the Supreme Court of the United States.

Barrett said that she tried "a media blackout for the sake of my mental health," but is "aware of a lot of caricatures that are floating around" of her and her family.

"I don't think it's any secret to any of you, or to the American people, that this is a really difficult -- some might say excruciating -- process," she said. "Jesse and I had a very brief amount of time to make a decision with momentous consequences for our family. We knew that our lives would be combed over for any negative detail. We knew that our faith would be caricatured. We knew our family would be attacked. And so we had to decide whether those difficulties would be worth it because what sane person would go through that if there wasn't a benefit on the other side?"

She said the "benefit" would be her commitment "to the rule of law and the role of the Supreme Court and dispensing equal justice for all."