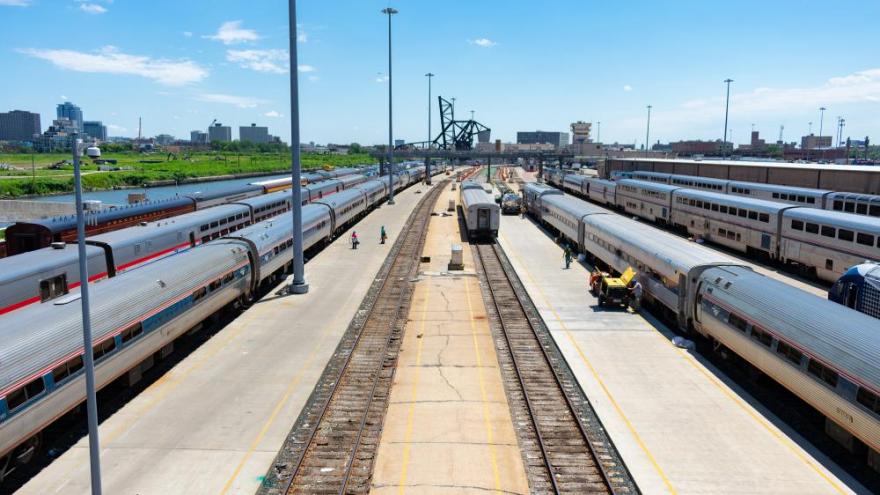 Amtrak is warning of another round of job cuts as it pares back train service amid a stubbornly slow recovery and said it does not plan to ask Congress for enough money to preserve the jobs.

(CNN) -- Amtrak is warning of another round of job cuts as it pares back train service amid a stubbornly slow recovery and said it does not plan to ask Congress for enough money to preserve the jobs.

An executive at the rail network wrote to employees Monday that it plans to run many of its long-distance routes less frequently, saving the rail network $150 million in costs. A copy of the message was obtained by CNN.

Executive Vice President Roger Harris did not quantify the job losses, but said the company "will work quickly to determine what staffing reductions or furloughs will occur."

It does not plan to ask Congress for additional funds to save those jobs, nor the 20% company-wide furloughs announced in May, spokeswoman Kimberly Woods told CNN Tuesday.

Amtrak has requested more than $3.5 billion from Congress this year, including a special $1.47 billion request to help with coronavirus-related costs and losses.

Amtrak officials had once predicted this year -- Amtrak's 49th -- could be the first profitable one ever.

Woods said Amtrak is "in the planning phase" and has not determined if the long-distance job cuts will be in addition to the 20% reductions.

In the memo, Harris wrote: "Congress is not going to support us indefinitely to run mostly empty trains. We need to demonstrate that we are using our resources efficiently and responsibly."

The Amtrak employee unions, however, are asking Congress to chip in to save those jobs. A coalition of 14 unions wrote to Congress on Friday requesting $350 million for Amtrak to prevent the layoffs. They warned the rail line will "use the pandemic as an excuse to permanently and artificially cut its workforce, eliminate or reduce routes and on-board or other customer services, or replace furloughed Amtrak employees with outsourced contractors."

Amtrak ridership dipped as low as 5% of usual, and is now at about 30% of usual, Woods said. "We forecast a slow recovery and expect systemwide ridership in FY21 to be half of what it was in 2019."

Amtrak's 15 long-distance routes stretch as long as the 2,400 mile California Zephyr line, running from Chicago to the San Francisco area. It used to run that route -- and 12 others -- daily, but plans to reduce service on most long-distance lines to three times weekly. Some of the more heavily traveled routes, such as the east coast Auto Train, will continue to run daily.

The Acela trains that shuttle passengers between east coast cities are not considered long distance routes.

The figures also show ridership was declining on long-distance routes in recent years, a drop the company attributed to poor on time performance and disinterest in train travel. The routes also require special, expensive operational considerations, such as using two locomotives per train "to protect against breakdowns," as Amtrak noted in its five year plan.

The cuts could be in place for at least a year. Harris wrote that Amtrak's "goal is to restore daily service on these routes as demand warrants, potentially by the summer of 2021."