UPDATE: 72 people taken to hospitals after derailment outside Seattle 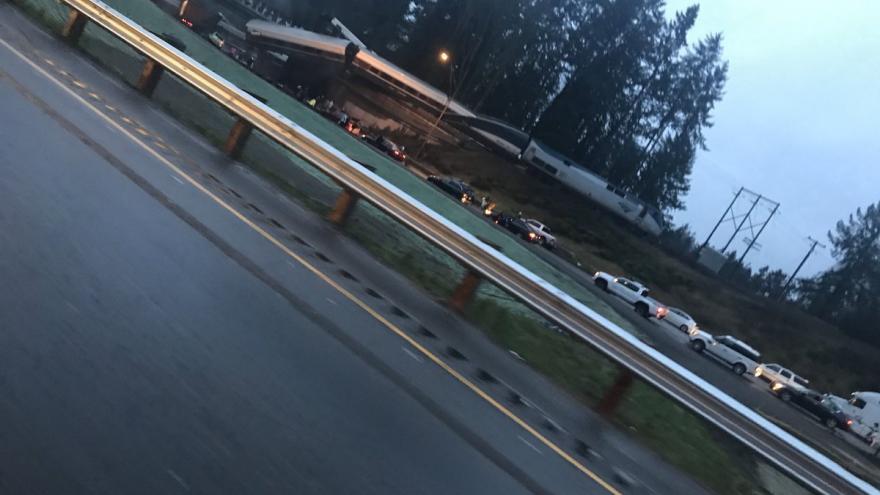 DUPONT, Wash. (AP) — The Latest on an Amtrak train derailment in Washington state (all times local):

Authorities say 72 people were medically evaluated and taken to hospitals for treatment after a train derailed onto a highway about 50 miles south of Seattle.

Nelson also reconfirmed that three people had died. Their identities have not been released.

Amtrak spokesman Marc Magliari also said Monday night that 80 passengers were on the train along with five on-duty employees.

Amtrak's president says positive train control — the technology that can slow or stop a speeding train — wasn't in use on the stretch of track in Washington state where a deadly derailment occurred.

Richard Anderson spoke on a conference call with reporters and said he was "deeply saddened by all that has happened today."

Authorities say there are three confirmed deaths from the Monday morning derailment south of Seattle that spilled several train cars onto a busy freeway.

More than 100 people were taken to area hospitals. Federal investigators were on the scene trying to determine a cause.

Authorities say there are 3 confirmed deaths in the train derailment outside Seattle.

City of DuPont Fire Chief Larry Creekmore also says more than 100 patients transported for treatment Monday after the train went off the track and cars onto a highway below.

A U.S. official who was briefed on the investigation said earlier that at least six people were killed. It wasn't immediately clear how to reconcile the numbers.

The official was not authorized to discuss the investigation publicly and spoke to The Associated Press on condition of anonymity.

Authorities say all the train cars have been searched but they didn't know if everyone was accounted for.

An Amtrak train that derailed south of Seattle, killing six people, was going more than 80 mph (129 kph) about one-quarter mile (0.4 kilometers) before it entered a curve where the speed limit was much lower.

A track chart prepared by the Washington State Department of Transportation shows the maximum speed drops from 79 mph (127 kph) to 30 mph (48 kph) for passenger trains just before the tracks curve to cross Interstate 5.

Train 501 left the tracks Monday on the I-5 overpass. More than 50 people were hospitalized.

The chart, dated February 7, 2017, was submitted to the Federal Railroad Administration in anticipation of the start of passenger service along a new bypass route that shaves 10 minutes off the trip between Seattle and Portland.

A website that maps location and speed using data from Amtrak's train tracker app shows the train was going 81.1 mph (129 kph) just before it derailed on the overpass.

It wasn't clear how fast the train was moving when it derailed.

Authorities say 77 passengers and seven crew members were on board an Amtrak train that derailed near DuPont, Washington.

The train hurtled off an overpass and crashed into vehicles below Interstate 5 Monday morning, leaving multiple people dead and others wounded.

Banks Olson says the train was not filled to capacity when it derailed.

Amtrak says the National Transportation Safety Board is investigating the incident.

Authorities say a total of 13 train cars jumped the tracks Monday in a deadly Amtrak derailment south of Seattle.

Bova says five vehicles and two semitrailers underneath the train on Interstate 5 were hit when cars came off the tracks from above.

It wasn't clear how many train cars fell onto the road Monday.

Hospital officials say at least two people are in critical condition and 11 others are seriously injured after a deadly train derailment outside Seattle.

Four hospitals say 50 people have been hospitalized but didn't immediately report all of their conditions. At least one person was in surgery Monday.

The Amtrak train running between Tacoma and Portland, Oregon, derailed south of Seattle as it was making its first run as part of a faster service that local authorities had warned could be dangerous.

The National Transportation Safety Board says it's sending a team, with the first members arriving Monday afternoon.

Board member Bella Dinn-Zarr told reporters in Washington, D.C., that it's too early to tell whether speed contributed to the accident.

The section of track where an Amtrak train derailed had just been upgraded as part of a $181 million project for a new faster route.

Sound Transit, the public transit system for the Seattle area, owns the track and oversaw construction of the upgrades.

Agency spokeswoman Kimberly Reason says extensive testing was done before the opening of the system Monday but didn't immediately have further details.

Reason says the project rerouted Amtrak trains that had been taking a slower route along a BNSF Railway line.

Authorities say at least six people died when the train went off the track and sent some cars onto a highway below.

A man who was driving on a highway alongside a train that derailed in Washington state says he and his friend rushed to help the victims.

Daniel Konzelman says they saw train cars with the roofs ripped off or tipped upside down Monday and a few vehicles on the roadway that were damaged.

He says they climbed into train cars and found injured passengers, some who were pinned underneath the train and others who appeared to be dead.

Konzelman says that if victims could move and seemed stable, he helped them climb out of the train. If they appeared seriously hurt, he tried to offer comfort by talking to them to calm them down.

The 24-year-old says he's an Eagle Scout with first-aid and emergency response training.

President Donald Trump is offering "thoughts and prayers" for those involved in the train derailment in Washington state.

Trump thanked the first responders at the scene and says the White House is monitoring the situation. Those thoughts came in his second tweet Monday about the derailment that officials say have killed at least six people.

His first tweet focused on the need for quick approval of a plan for more spending on infrastructure.

President Donald Trump is using a deadly train derailment in Washington state to call for a boost to infrastructure spending.

In a tweet sent about three hours after the crash that authorities said killed at least six Monday, Trump says it shows "more than ever why our soon to be submitted infrastructure plan must be approved quickly."

Trump adds: "Seven trillion dollars spent in the Middle East while our roads, bridges, tunnels, railways (and more) crumble! Not for long!"

Trump is expected to release a framework for increased infrastructure spending in January, relying on a mix of federal, local and private spending.

A U.S. official says a train derailment outside of Seattle has killed at least six people and the death count is expected to rise.

The official who was briefed on the investigation also says preliminary signs indicate the Amtrak train may have struck something on the track before going off the track.

The official was not authorized to discuss the investigation publicly and spoke to The Associated Press on condition of anonymity.

The high-speed train was making its first run on newly constructed tracks when it derailed before 8 a.m. Monday.

The official said because the tracks were new it was unlikely to be a maintenance issue.

An Amtrak train that derailed south of Seattle and killed multiple people was making its first run as part of a higher speed service that local authorities had warned could be dangerous.

The state Department of Transportation posted information about the $180.7 million project online that says the maximum speed along that stretch of track is 79 mph.

The new route was designed to speed up service by removing passenger trains from a route along Puget Sound that's bogged down by curves, single-track tunnels and freight traffic.

The mayor of Lakewood, Washington, a city along the route, predicted a deadly crash. But Don Anderson thought it'd involve a fast-moving train hitting a car or pedestrian at a crossing.

Pierce County sheriff's spokesman Ed Troyer says none of the fatalities were motorists who were in cars and trucks when the train came off the tracks on to I-5.

He says emergency responders are working to get survivors out and to area hospitals.

Authorities say the train derailed before 8 a.m. Monday, but no specifics were immediately available.

Authorities say several vehicles on Interstate 5 were struck by the falling train cars when an Amtrak train derailed south of Seattle, and "multiple motorists" were injured on the roadway.

No fatalities of motorists were reported.

All southbound lanes of I-5 were closed south of Joint Base Lewis-McChord, and motorists were being warned to avoid the area.

The Pierce County Sheriff's office says "injuries and casualties" were reported when the train derailed before 8 a.m. Monday, but no specifics were immediately available.

Chris Karnes was on the train Amtrak train that derailed south of Seattle, three or four cars back from the front.

Karnes told The Associated Press in a brief phone interview Monday morning that he was "not sure what got hit."

He was unhurt and is now near the medical tents set up in a median area between north- and sound-bound Interstate 5, just south of DuPont, Washington.

Karnes said: "there are several cars that are hanging over the overpass," Karnes.

The train derailed before 8 a.m. Monday. Authorities reported "injuries and casualties" but did not immediately have more information.

An Amtrak train derailed south of Seattle, and authorities say "injuries and casualties" were reported.

The train derailed about 40 miles (64 kilometers) south of Seattle before 8 a.m. Monday, spilling at least one train car on to busy Interstate 5.

The Pierce County Sheriff's office says in a tweet that the train was heading south bound and that there were "injuries and casualties," but no numbers were immediately available.

All southbound lanes of Interstate 5 were closed south of Joint Base Lewis-McChord, and motorists were being warned to avoid the area.

The train derailed just before 8 a.m.

No other information was immediately available.