Amir Locke's parents say their son got a gun legally, but they always worried about interactions with police 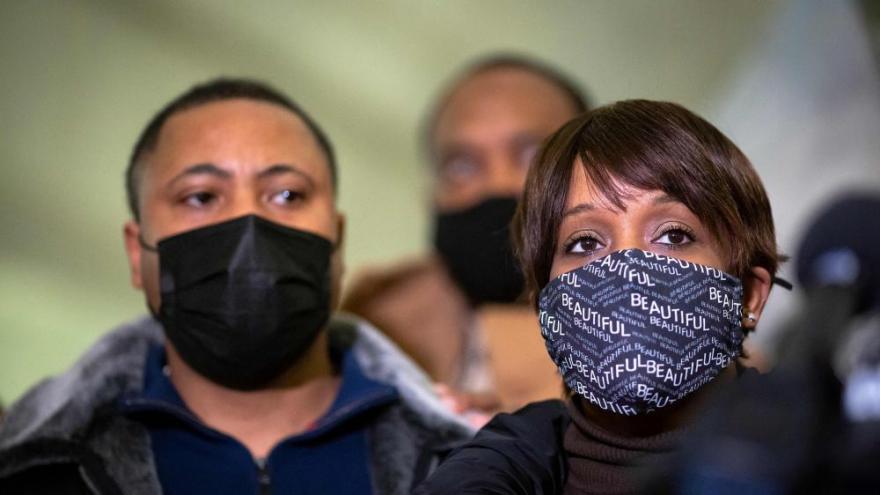 Amir Locke's parents, Andre Locke and Karen Wells, at a news conference on February 4 at City Hall in Minneapolis.

(CNN) -- The parents of Amir Locke, a 22-year-old Black man fatally shot by police in a Minneapolis apartment during a no-knock warrant execution, said Friday that he had obtained a gun legally after a conversation with the family.

"He made sure that he did his research, everything was going to be legal," his mother Karen Wells told CNN's Don Lemon, adding that he learned how to use it and obtained a permit.

"Because they've been watching all their lives about what has been unfolding throughout this nation, on our Black males," she said.

The parents said the conversations with Amir and his older brother were often about how to interact with police so he can "live to see another day."

According to police body camera video, Locke was sleeping when officers entered the apartment and yelled, "Police! Search warrant!"

He begins to try and stand up, still wrapped in blankets, and is seen holding a gun, according to the footage. Three gunshots are then heard from officers.

"We've been prepping our boys for years to always obey the law. Every day. It's not a regular conversation that some White households have," he said.

"Our conversations go like this, 'How are you doing, son? Today watch your surroundings, check your vehicle, make sure that everything is OK.

Wells said she was proud of Amir when he learned how to use the weapon and obtained his permit. The one aspect that worried her wasn't whether he would use it in dangerous situations with civilians, but it was if police saw him with it.

"But I actually worried about him encountering the police. And not the way that he encountered them on February 2nd, but just, like, if he had his weapon, if he ever got stopped and pulled over on the side of the road. ... My fears have always been something that dealt with the police department," she said.

The Minneapolis Police Department has been under intense scrutiny following the murder of Floyd, a Black man whose killing by a White MPD officer sparked national and global protests against police brutality -- particularly toward Black Americans.

The deadly shooting of Breonna Taylor, who was also Black, during a warrant service in March 2020 in Louisville, Kentucky, also received national backlash and became central to racial reckoning.

The warrant served that led to Locke's killing was related to a homicide under investigation by the neighboring St. Paul Police Department, a police spokesperson said. Locke was not named in any warrant, police said.

It's not clear what is contained in the warrant, and Minneapolis officials have said the totality of circumstances leading to their officer shooting are now under investigation by the state's Bureau of Criminal Apprehension.

Andre Locke pointed out that there are several members of the family who are in law enforcement, including a cousin who mentored Amir on gun safety.

"We're not against police officers. We just want accountability," he said.

Minnesota Attorney General Keith Ellison vowed to conduct a "fair and thorough" investigation, according to a statement.

"Amir Locke's life mattered. He was only 22 years old and had his whole life ahead of him. His family and friends must now live the rest of their lives without him."

No-knock warrants have been a point of contention in terms of how police departments and cities choose to implement them.

Breonna Taylor's killing at the hands of Louisville, Kentucky, police shined a bright spotlight on this issue when officers rammed their way into her apartment and shot her at least eight times. The department said the officers announced themselves and returned gunfire from her boyfriend.

Minneapolis Mayor Jacob Frey announced Friday night that he would temporarily ban police from seeking and executing no-knock warrants-- though like a similar policy change over a year ago, it still allows for no-knock warrants in certain situations.

The Minneapolis policy, as of Wednesday, allowed "unannounced entry" on high-risk warrants, which would "authorize officers to enter ... without first knocking and announcing their presence or purpose." A judge is supposed to indicate whether that is permitted.

The Minneapolis Police Department's SWAT team is generally supposed to be used for "high-risk warrants," as determined by an internal risk-assessment form.

The city's warrant policy requires officers, in most cases, to announce "police" and "search warrant" before crossing the threshold of the door into a home, even on no-knock warrants. But a supervisor can decide whether that would "create an imminent threat of physical harm" and can allow officers to enter without announcement.