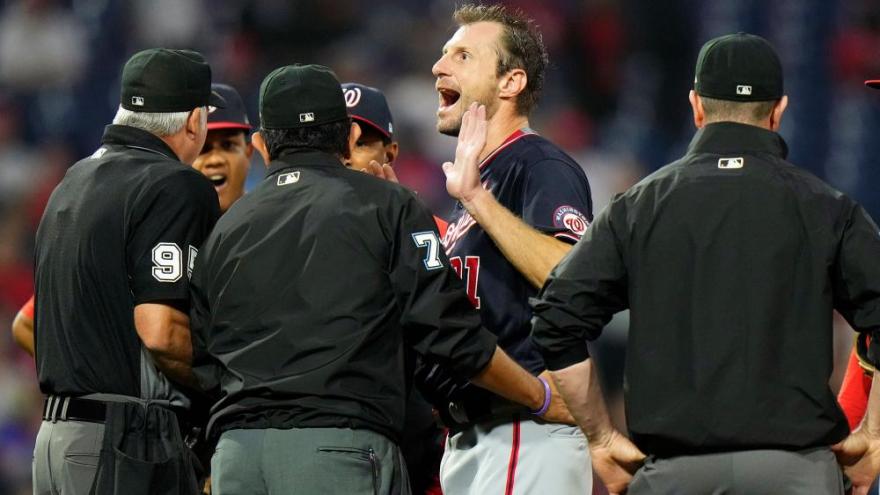 (CNN) -- As New York Mets pitcher Tylor Megill walked off the mound after his Major League Baseball debut Wednesday night, the home faithful got to their feet and heartily applauded the 25-year-old.

But those cheers soured when Megill was forced to make a pit stop. The home plate umpire approached Megill and asked him to hand over his glove and hat and unbuckle his belt.

"Talk about a buzz kill," Mets announcer Gary Cohen said, as the cheers turned to boos. "I mean, he's getting this great ovation walking off and they're gonna do a strip search? C'mon."

The search was all part of baseball's new crackdown on "sticky stuff" -- unapproved foreign substances that some pitchers have sneakily used to better grip the ball. Starting Monday, MLB directed its umpires to begin checking a pitcher's hat, glove and belt at random points in the game to make sure that the sticky stuff isn't being used.

The crackdown has only been in place for a few days now, and no pitchers have been caught. Still, several pitchers have already become visibly peeved by the frisks.

On Tuesday night, Washington Nationals pitcher Max Scherzer demonstratively threw down his hat and glove and undid his belt when umpires checked him after he struck out a batter.

In a different game just hours later, a relief pitcher for the Oakland Athletics outdid him. When Sergio Romo was stopped for a check while walking off the field, he tossed his hat, glove and belt on the ground and then pulled down his pants to prove his innocence.

Why MLB is cracking down

Since the early days of the sport, pitchers have used various substances to reduce the slickness of the ball to better control it. MLB has long banned most substances, aside from a bag of rosin powder. However, the practice of using unapproved sticky stuff has become more common in recent years and, according to the league, has changed the way the game is played.

MLB commissioner Rob Manfred said in a statement last week that the crackdown would better level the playing field away from pitchers' recent strength.

In a statement, MLB said it completed extensive testing that determined sticky substances can increase the spin rate and movement of the ball, giving an unfair advantage to pitchers and leading to less on-field action.

The crackdown also comes amid criticisms that at bats are increasingly ending in a strikeout, walk or home run -- known as the "three true outcomes" -- in which most players on the field simply stand around and do nothing. This year's league-wide batting average is on pace to be .238, which would be the lowest since 1968. After that year, the league lowered the pitcher's mound to better favor hitters.

And on Thursday night four Chicago Cubs pitchers combined to no-hit the Los Angeles Dodgers. That's the seventh no-hitter thrown this 2021 MLB season -- tying the modern-era record for no-hitters in a season.

Though no pitchers have been caught sticky-handed, the checks have led to some drama, including in Tuesday night's game between the Nationals and Philadelphia Phillies.

In the middle of the fouth inning, Phillies manager Joe Girardi asked umpires to check for substances on Scherzer, the Nationals pitcher. Umpires then approached Scherzer for the check, and he demonstratively threw down his equipment and pleaded his innocence. The umpires found no issues.

An inning later, after striking out another batter, Scherzer walked off the field while glaring toward the Phillies dugout. He then held up his glove and hat to further show the opponent he was clean. In response, Girardi left his dugout and stomped onto the field, yelling across the way. Umpires ejected him from the game.

After the game, Girardi said he was suspicious of Scherzer because he kept touching his hair, and the manager denied that the request was a bit of gamesmanship to throw off the pitcher. In a press conference, Scherzer said he had simply been using the allowed rosin bag and sweat from his hair for grip.

"I'd have to be an absolute fool to actually use something tonight when everybody's antennas are so far high to look for anything," Scherzer said.