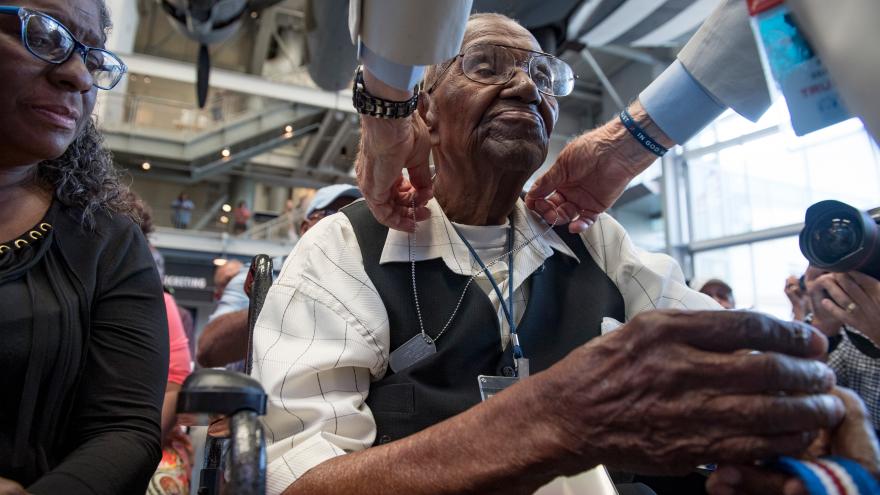 Today, the oldest known US veteran of World War II turned 111, and the National WWII Museum held a socially distant celebration for him.

The Victory Belles, the museum's vocal trio, sang several numbers for him while the Aeroshell Aerobatic Team and the Big Easy Wing performed a military flyover.

The museum has hosted Brooks's birthday celebrations on its campus for the past five years but had to adjust this year's celebration due to the Covid-19 pandemic.

As CNN previously reported, the museum hosted a national card drive for Brooks in hopes of receiving 500 to 1,000 birthday cards. They got almost 10,000 cards.

"It is such an honor to have the oldest living US veteran of World War II living so close to our institution, and it was meaningful for us to continue to celebrate Lawrence Brooks and his incredible life in a safe manner this year," said Amber Mitchell, assistant director of public engagement in a news release.

According to the museum, which is located in New Orleans, Brooks served in the predominantly African American 91st Engineer Battalion, which was stationed in New Guinea and then the Philippines during World War II.

Born in 1909, Brooks obtained the rank of Private 1st Class during the war, according to the museum.

In a 2014 interview with the museum, he recounted a terrifying brush with death when he was on board a C-47 cargo jet filled with barbed wire when one of the plane's motors went out. To lighten the load, he had to throw as much of the wire out as he could.