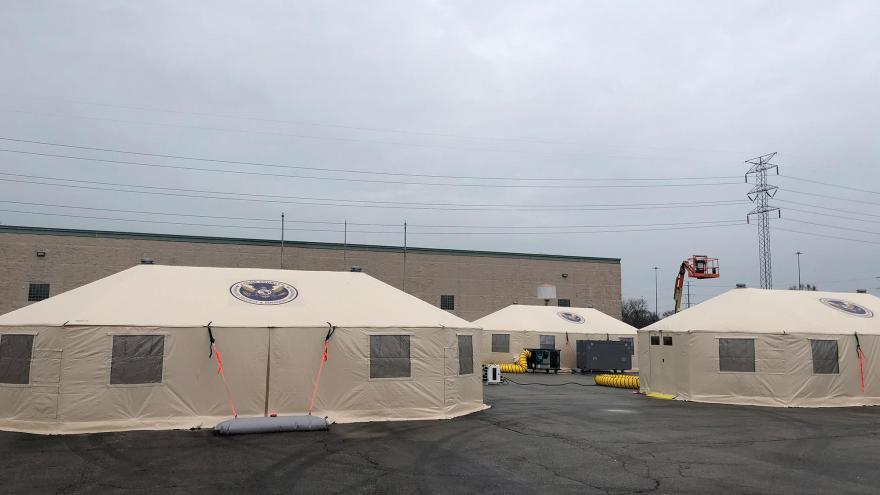 The quarantine camp at the Cook County jail will keep Covid-19 infected detainees and those suspected of being infected so they're separate from the rest of the jail population.

(CNN) -- Chicago's Cook County Sheriff Tom Dart stepped in front of news cameras and reporters and said 38 of their detainees in Cook County jail had now tested positive for the novel coronavirus with over 120 still left to be tested on Friday.

"We knew this was coming," said Dart. "We knew, between people being asymptomatic and staff coming in and out every day, that this was going to happen."

The 38 confirmed Covid-19 cases announced Friday is a sharp increase from just a day prior when America's biggest single site jail had 17 confirmed cases in detainees. Saturday, that number jumped to 89, an increase that's not expected to end there with dozens still to be tested.

"Jails in this country are petri dishes. They're the government equivalent of nursing homes or cruise ships, said Toni Preckwinkle, Cook County Board president. "It's very difficult in a jail to maintain social distancing."

It's why the county has now tried to minimize the number of detainees that are at risk to begin with, screening and releasing nonviolent pretrial defendants. Of the around 5,000 people that remain in the jail, the county estimates about 80 percent of them are violent offenders, leaving around 1,000 or so that could safely be released.

"We're focusing on those who are elderly and in frail health, pregnant woman, people who were accused of nonviolent crimes who have bails of less a thousand dollars who haven't been able to pay them," said Preckwinkle.

The jail's temporary solution for coronavirus -- a quarantine camp -- is unlike anything else seen in the country. Built from repurposing an old mental health facility, the quarantine camp will keep Covid-19 infected detainees and those suspected of being infected so they're separate from the rest of the jail population.

"There isn't even close to a playbook, there's nothing," said Dart. "I mean I tried to find one, whether it was from the feds or the locals. Everyone basically said 'hey, you're on your own.'"

The facility was ready to receive detainees Friday afternoon where medical professionals would triage detainees in the numerous tents set up on the property before assigning them to a specific building.

Dart said coronavirus positive detainees that don't require hospitalization stay together in one dormitory while those awaiting test results stay in others.

"We got this up and running in three days, which is an incredible testament to the staff that we have here," said Dart. "We have sort of the hospital side of it pretty much squared away. Now for the people who are not infected, how do we make sure that we keep maintaining that? And boy that's tricky."

Cook County at risk for becoming a major hot spot

Cook County is among the places the White House coronavirus task force worries is at risk for becoming another major hot spot for novel coronavirus in the United States, it's part of why the Medical Examiner's Office is in the process of acquiring additional refrigerated warehouse space to help store bodies if needed.

In a week, the state of Illinois went from confirmed cases in the lower hundreds to more than 3,000, including over 34 deaths.

"A week ago we were seeing one or two cases a day, now we're seeing six to eight deaths a day," said Dr. Ponni Arunkumar, chief medical examiner at the Cook County Medical Examiner's Office. "So that trajectory is going upwards and I think there will be an increase in the number of deaths."

It's a worst-case scenario provision Arunkumar hopes they won't need, but the office is already using a separate refrigerated trailer to help store potential Covid-19 infected bodies, and wants to make sure they are ready for an influx of patients that could come on the scale of New York City's within weeks.

"We are prepared to deal with any increase in the number of diseased patients. We are the last physicians who see these patients," said Arunkumar. "We want to ensure we treat them with the dignity and respect they deserve."