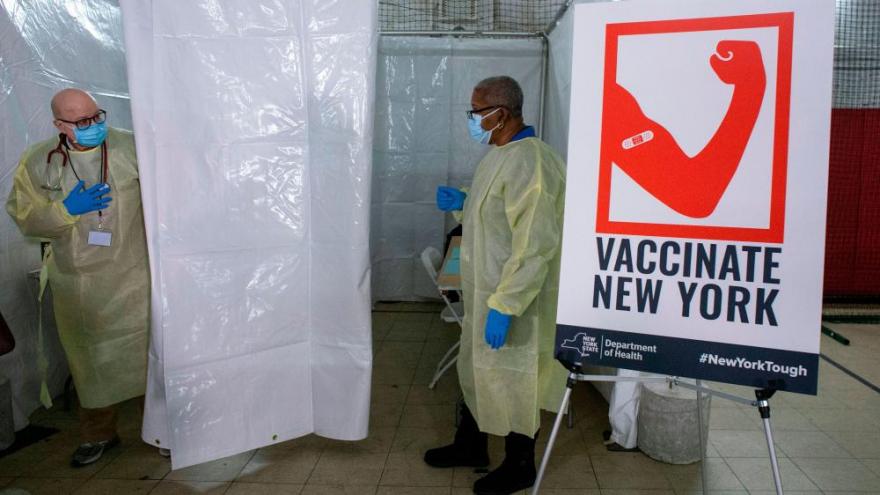 The United States has seen a stabilization of reported Covid-19 cases, but for Black and brown communities disparities in case and death rates remain.

(CNN) -- In recent weeks, the United States has seen a stabilization of reported Covid-19 cases, but for Black and brown communities disparities in case and death rates remain.

And as the vaccine is rolled out across the country, these communities are being vaccinated at far lower rates than White Americans.

These inequities are evident in some of the country's largest metro areas, where demand for vaccines is far outpacing supply. While experts have raised concerns about vaccine hesitancy among Black and Hispanic adults, disparities in vaccination rates also indicate that appointments are not accessible enough to underserved groups.

"As we're considering how to ensure equity in vaccinations, one key set of factors will be making sure all people can access vaccines regardless of their circumstances," said Samantha Artiga, director of the racial equity and health policy program at Kaiser Family Foundation.

Artiga said increased demand can lead to a "first come, first serve" system, creating an environment where those who have internet access and a vehicle are more likely to be able to sign up for a vaccine.

A CNN analysis of five of the largest metro areas in the US shows that while each is experiencing challenges specific to the city, all are facing supply shortages, difficult signup processes and disproportionately low vaccination rates among the groups hardest hit by the pandemic.

The Covid-19 pandemic has disproportionately affected Harris County's Hispanic residents, but data released by Texas shows that vaccine rates among the Hispanic population are lagging.

In Harris County, 44% of residents are Hispanic but accounted for 60% of new Covid-19 infections during the first week of February.

The disparity is also present in vaccination rates -- only 19% of vaccines in the county have been administered to Hispanic residents, while 43% have gone to White residents.

Only a small percentage of the county's vaccine providers are in majority-Hispanic ZIP Codes. There are fewer providers in rural areas, leading some Texans to drive long distances to get a vaccine. Whiter, wealthier areas of the county have a higher concentration of provider locations.

The state recently announced that it would be rolling out several Covid-19 vaccination hubs, including six in Harris County. In a press conference on Saturday, Houston Mayor Sylvester Turner criticized the lack of distribution of doses to smaller health clinics in the county, many of which are located in under-vaccinated areas and can be easier to access by public transportation.

"Mass distribution sites are good for numbers, but when it comes down to the people who are disproportionately impacted, they're not good for equity," he said. City and state officials have since asked Gov. Greg Abbot to provide more vaccines for smaller health clinics and pharmacies.

A disproportionate number of White residents vaccinated in Chicago

Equitable vaccine distribution in Chicago was an early concern among health officials, who worried that the city's pharmacy deserts could worsen the disparate effects.

Hispanic residents make up the largest share of the city's Covid-19 cases -- 35%. And 38% of those who have died of the disease are Black.

Distribution sites are clustered in the city's predominantly White areas and are sparser in the city's south and west sides, where most residents are Black or Hispanic. Despite the higher rates of Covid-19 infections for Black and Hispanic Chicagoans, they have received a combined 38% of vaccine doses, while White residents have received almost half. The city's population is 29% Hispanic, 30% Black and 33% White.

Chicago is also one of the few cities releasing vaccination data by ZIP code, revealing that far fewer residents have received a dose of the vaccine on the city's south and west sides than in areas that are predominantly White.

These disparities have been evident since the first phase of the rollout, which focused on healthcare workers, and have become more pronounced as the vaccine was made available to other essential workers and those over the age of 65. A scarcity of doses and appointments has caused confusion, an influx of scam calls and led one Chicago doctor to compare the vaccination distribution process to "playing the Hunger Games."

Lack of data in Atlanta creates challenges for accountability

Georgia's public health department has not published county-level demographic data for cases or vaccinations. But statewide, Black residents make up 25% of confirmed cases while making up 33% of the population. There are fewer vaccination sites in majority non-White areas of DeKalb and Fulton counties than in majority-White areas, and appointments have been difficult to come by.

Atlanta, which is 51% Black, was identified as a particular area of concern for vaccine access in a study by the University of Pittsburgh School of Pharmacy, which looked at areas of the country where Black residents were more likely than White residents to live more than a mile from the nearest vaccine provider.

But a lack of available data makes it hard to identify and begin to address disparities.

"Limitations in data...limit the extent to which we're able to get a full picture of equity in vaccination," said Artiga. "The data are key for understanding where there are gaps, and making an effort to address those gaps."

Confusion over availability in Los Angeles

Los Angeles County, the first US county to report more than 1 million Covid-19 cases, released its first batch of demographic vaccine data on Monday. The county entered a new phase of its vaccination program on January 20, which allows those 65 and older to sign up for a shot.

While most of the county's vaccine sites are in majority non-White areas, officials said only 7% of Black seniors and 14% of Hispanic seniors have received a first dose of the vaccine, despite the disproportionate rates at which these communities have been impacted by the pandemic.

Vaccination rates among other groups of seniors are higher -- 17% of Whites, 18% of Asian Americans and 29% of Native Hawaiian/Pacific Islanders have received a first dose of the vaccine.

Barbara Ferrer, director of the county's public health department, said in a Monday briefing that she was "alarmed" at the data and expressed an urgent need for better outreach.

"This early data shows us that we need to make it much easier for Native American, Black and Latinx residents and workers to be vaccinated in their communities by providers they trust," she said.

The county's vaccination efforts have been hampered by confusing messaging and an inconsistent amount of doses given to the county each week, making it difficult to administer the two-dose regimen current vaccines require.

Public health officials announced that county-run sites would primarily be administering second doses this week as they deal with a shortage of supply, which left many confused about whether first doses were available at city-run sites. The messaging mix-up left the city-run vaccination site at Dodger Stadium with thousands of unused first dose appointments available to seniors on Tuesday. But the next day, Los Angeles Mayor Eric Garcetti said city-run sites would be temporarily closed at the end of the week due to a shortage of doses.

New York City has faced intense criticism for its vaccine rollout, which activists and healthcare advocates have decried as inefficient and inequitable.

The city has tried to increase the speed of vaccinations, including by opening a large hub at Yankee Stadium, but some of its hardest-hit areas still have the fewest vaccine distribution centers. Sites in these neighborhoods are faced with the dilemma of whom to vaccinate. A site in majority-Hispanic Washington Heights, which has the highest rate of infections in Manhattan, was criticized last week for vaccinating high numbers of White people who came to the clinic from other neighborhoods.

Staten Island and Queens, among the hardest hit boroughs, have 11 and 28 sites, respectively. Even in areas where a site is available, residents must navigate a complicated signup process requiring Wi-Fi access, email and often a good measure of luck.

As state and local governments receive more doses of the vaccine, health officials and activists are sounding the alarm about the need for better planning and outreach in vulnerable communities.

Monica Spoch-Spana, a senior scholar at the Johns Hopkins Center for Health Security, said that while jurisdictions wait for more doses to arrive, they can plan for how best to reach underserved areas. Spoch-Spana and other researchers at Johns Hopkins published a report on Tuesday highlighting the ways local and state governments can work with communities of color to ensure greater equity in vaccine distribution.

"There may be a scarcity of product," she said, "but there is not a scarcity in terms of opportunities to connect with organizations that have roots in these communities to jointly develop a delivery system that is going to work for these segments of society."