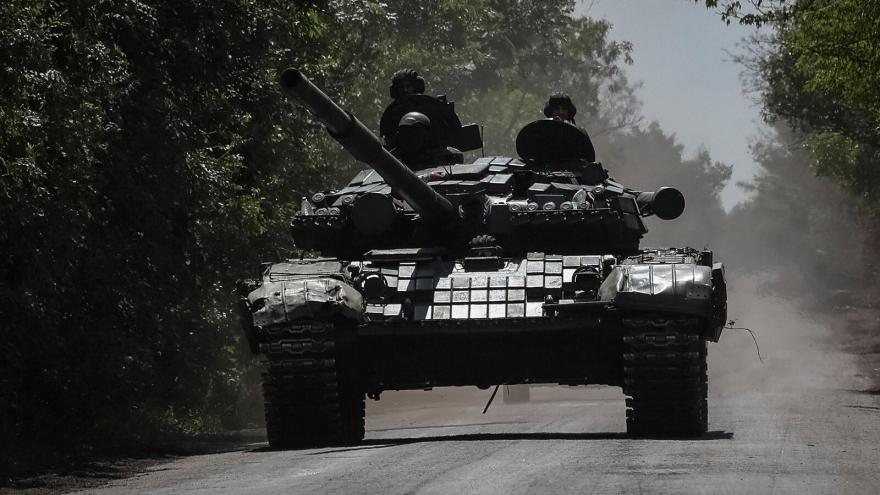 (CNN) -- The US government is urging Americans in Ukraine to leave the country immediately, warning that Russia is stepping up efforts to launch attacks on civilian infrastructure and government facilities in the coming days.

"The US Embassy urges US citizens to depart Ukraine now using privately available ground transportation options if it is safe to do so," a security alert on the embassy's website said.

"The security situation throughout Ukraine is highly volatile and conditions may deteriorate without warning."

The renewed US warning comes as Russia's unprovoked invasion of Ukraine approaches the six month mark on Wednesday and follows similar warnings, from Ukrainian President Volodymyr Zelensky and other officials, that Moscow may carry out intense attacks, including missile strikes, to coincide Ukraine's Independence Day on Wednesday.

In Kyiv, the city military administration issued a ban on all big gatherings between Monday and Thursday, saying "it is forbidden to hold mass events, peaceful meetings, rallies and other events related to a large gathering of people."

Gen. Mykola Zhyrnov, head of Kyiv's military administration, said the order was imposed so that security forces could respond in a "timely manner to threats of missile and bomb attacks by the troops of the Russian Federation on decision-making centers, military facilities, defense industry facilities, critical infrastructure and nearby residential areas."

Last week, the State Department said it summoned Russian Ambassador to the US Anatoly Antonov to a meeting so the United States "could warn Russia against any escalation of its war on Ukraine," a department spokesperson said Monday.

This included calling on Russia to "cease all military operations at or near Ukraine's nuclear facilities and to return full control of the Zaporizhzhya nuclear power plant to Ukraine," the official added.

Kyiv and Moscow have made a barrage of accusations against each other about security and military action at and around the plant, the largest nuclear complex in Europe. But the lack of independent access to the plant, which has been occupied by Russian forces since March, makes it impossible to verify what is happening there.

Recent satellite images from Maxar Technologies of the Zaporizhzhia nuclear power plant show no signs of "systemic shelling," despite claims by Russian President Vladimir Putin that the Ukrainian military was conducting repeated military strikes at the plant.

Tensions in the war have spiked this week with the death of Darya Dugina, a Russian political commentator and the daughter of prominent ultranationalist ideologue Alexander Dugin.

Russia has blamed Ukrainian special services for her killing, according to Russian state news agency TASS.

"The murder of journalist Darya Dugina has been solved, it was prepared by the Ukrainian special services, by a citizen of Ukraine," TASS reported, citing Russia's Federal Security Service (FSB), which named a woman as the perpetrator and said she had fled to Estonia after the attack.

Ukraine has denied any involvement in Dugina's killing, calling the FSB claims fiction.

Dugina, the editor of a Russian disinformation website, died after a bomb planted in a car she was driving went off on the outskirts of Moscow on Saturday evening.

Dugina's father, Alexander Dugin, is a prominent Russian nationalist credited with being the architect or "spiritual guide" of Putin's invasion of Ukraine.