Americans turn pessimistic amid concerns over economy and coronavirus 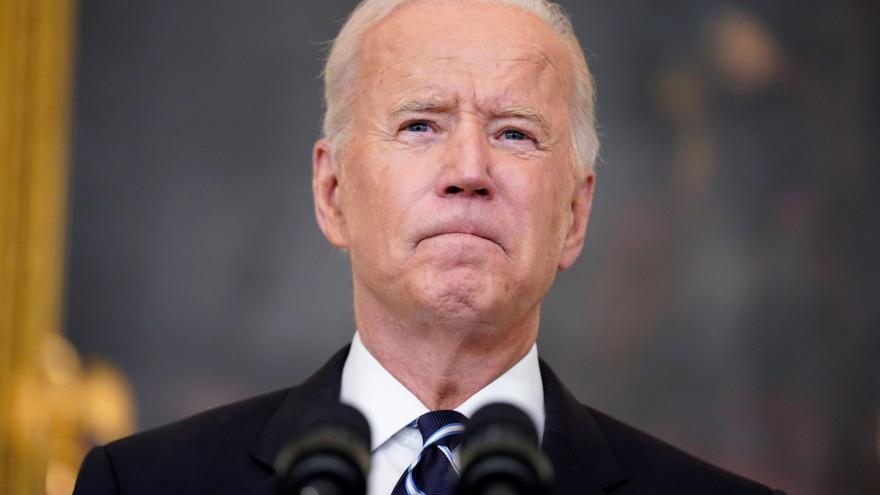 (CNN) -- The tentatively positive public outlook that marked the first months of the Biden administration has faded, according to a new CNN poll conducted by SSRS. The survey, released Friday, finds a rising share of Americans who say things in the US are going badly and that the economy is in poor shape, with increased worries about the coronavirus, the economy and crime.

The new poll finds 69% of Americans say things in the country today are going badly, below the pandemic-era high of 77% reached in January just before President Joe Biden took office but well above the 60% who felt that way in a March CNN poll.

The survey, which was conducted using a different methodology than prior CNN polling, was conducted mostly online and over about a month-long period.

Biden's approval rating stands at 52% approve to 48% disapprove, with disapproval up since April. The survey was conducted throughout August and early September, and Biden's ratings shifted over that time, with his approval rating in the first half of August (55%) more positive than in later interviews (50%).

The rising pessimism about the trajectory of the US and its economy comes across party lines, but the rise in Biden's disapproval appears concentrated among independents. While 43% of them disapproved of the way Biden was handling his job in an April CNN poll, that figure now stands at 54%. Among partisans, Biden's numbers remain about as they were in April.

August saw several significant challenges for the Biden administration, including a sharp increase in coronavirus cases in the US and a chaotic withdrawal from Afghanistan as the Taliban speedily took control of the country. In interviews conducted after the fall of Kabul in mid-August, the new survey shows Biden's approval rating at 50% approve to 50% disapprove, with his approval rating among independents in the survey dipping from 51% approval in the first part of the field period to 42% in the latter segment.

The survey shows a significant decline since April in approval for Biden on his handling of the coronavirus. All told, 56% approve of the way he is handling it, down from 66% in April. That shift comes amid widespread concern about the virus. Americans' worries about the coronavirus pandemic in their local community stand at a higher level than last summer, before vaccinations against the virus were available, with 70% now saying they are very or somewhat worried compared with 60% last summer. Democrats continue to express the deepest worry about the pandemic (58% are very worried), but sharp worry has climbed among Republicans, from 9% late last summer to 27% now.

At the same time, 77% of Americans say they are worried about the state of the economy in their community, up sharply from 58% who said the same last summer. That increase is largely driven by a negative shift among Republicans (from 28% worried last year to 85% worried now), but majorities across parties express concern about the economy (70% among Democrats, 76% among independents), and overall assessments of the state of the economy have worsened since the spring. In April, 54% said the economy was in good shape, the first time that figure had crossed 50% since before the start of the pandemic, but now, only 38% say the economy is in good shape, with declining ratings coming from both Democrats and Republicans.

The survey also finds a rise in concern about the risk of crime in the communities where Americans live, with 57% now saying they are worried, up from 37% late last summer. That shift has also come across party lines, with worry up 26 points among Republicans, 20 points among Democrats and 16 points among independents.

Coronavirus (36%) and the economy (20%) are most frequently mentioned as the most important issues facing the country. No other issue is named in an open-ended question by more than 9% of Americans. And when Americans are asked to name the top economic problem facing their family today, rising prices and the cost of living are the overwhelming top issue, with 43% naming something related to inflation or the cost of living as their most pressing problem.

Americans' perceptions of how important these issues are, however, is deeply divided by party. Among Democrats, roughly 8 in 10 say it is very important to counteract racist policies, address gun violence, slow climate change and expand voting access, while fewer than 3 in 10 Republicans say the same. Republicans consider stemming the flow of undocumented immigrants far more important than do Democrats, 84% very important vs. 22%.

Americans express widespread anger about how things are going in the US, with 74% saying they are at least somewhat angry about things in the country today. That is about as widespread as last summer, but the feeling is less intense now. While 51% described themselves as "very angry" last year, just 26% feel the same way now, squarely between the level of intense anger measured in the first years of Donald Trump's (31%) and Barack Obama's (23%) presidencies.

The partisan dynamic behind those angry feelings has shifted in the last year. Anger has grown nearly 20 points among Republicans, while dropping almost 30 points among Democrats, but even with those shifts, majorities across parties say they are at least somewhat angry about the state of America today.

The change in methodology means that shifts in results compared with prior CNN surveys may be at least partly due to differences in the ways respondents answer questions when they are filling out a survey themselves online vs. when they are talking to an interviewer on the phone, and in the increased number of poll-takers who express an opinion on most questions.