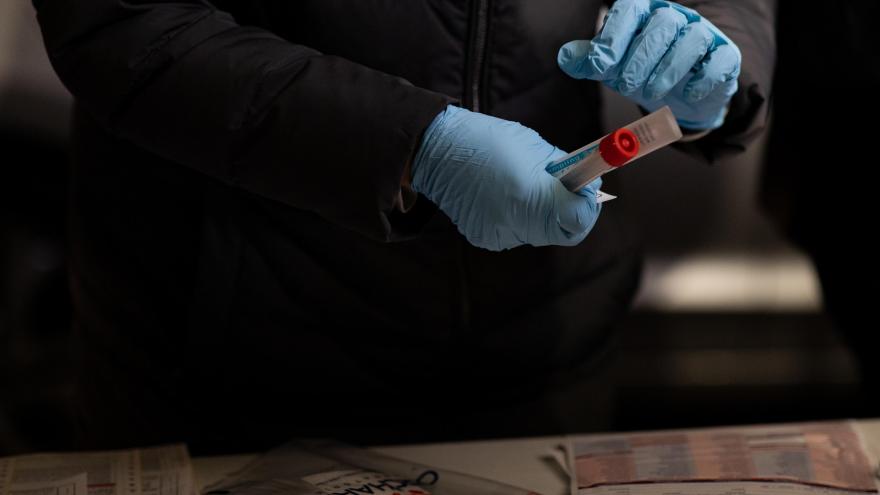 (CNN) -- As Congress struggles to provide more federal funding to combat Covid-19, Americans are starting to feel the consequences.

The end of this program -- which launched in the early days of the pandemic -- makes it tougher for the nation's 31 million uninsured residents to contend with Covid-19. While some access to free services continues, many uninsured Americans will now have to shell out money to get a coronavirus test or receive treatment if they are sick.

Vaccinations should still be provided free of charge since the federal government pre-purchased all the vaccines, said Jennifer Tolbert, associate director for the Program on Medicaid and the Uninsured at the Kaiser Family Foundation. Providers have been able to apply for reimbursement for administering the shot.

The federal program's cessation is expected to hit more than just the uninsured, especially if the US experiences another Covid-19 surge.

"Some patients will end up not getting these lifesaving vaccines, treatments or being able to identify if they have had any type of exposure, which is going to harm these vulnerable individuals and impact our nation's safety and protection against Covid-19," said Audrey Richardson, policy analyst at Families USA, a consumer health advocacy group.

As part of its request for $22.5 billion in supplemental Covid-19 funding last month, the White House asked for $1.5 billion to replenish the program for the uninsured.

However, the $15.6 billion package that the House failed to include in the federal spending bill last month did not specifically include more funding for the uninsured. On Thursday, lawmakers struck a bipartisan deal "in principle" for an even narrower $10 billion Covid-19 aid proposal, according to Utah GOP Sen. Mitt Romney.

Several industry groups representing providers are pushing lawmakers to revive the effort, especially as cases of the BA.2 subvariant of the Omicron variant rise in Europe and Asia.

"Without question, the exhaustion of these funds will threaten access to testing for the most vulnerable Americans at a critical time in our nation's response effort," Thomas Sparkman, senior vice president for government affairs and policy at the American Clinical Laboratory Association, wrote in a letter to congressional leaders last month.

The White House has also flagged other federal Covid-19 response efforts that will suffer without additional money, including purchasing more vaccines, monoclonal antibody treatments and preventive treatments for the immunocompromised. The federal government will also have trouble sustaining testing capacity.

Plus, the nation's ability to identify emerging variants and support global vaccination and treatment efforts will be reduced, according to the Biden administration.

Congress created and funded the Covid-19 uninsured program as part of several coronavirus relief packages it passed in 2020. The effort also draws from money allocated in the American Rescue Plan Act, which was enacted in March 2021.

The goal was to make sure those without health coverage could obtain care, which would also help stop the virus' spread.

More than 50,000 providers have been reimbursed a total of just under $19 billion by the program as of early March, according to Martin Kramer, spokesman for the federal Health Resources and Services Administration, which runs the uninsured fund. Since early 2022, the agency has been receiving about 1 million claims a day and paying out about $500 million a week.

About 61% of the reimbursements have been for testing, about 31% for treatment and less than 9% for vaccine administration, according to data from the Centers for Disease Control and Prevention.

Millions of Americans have benefited from the program, Kramer said, noting it has served a critical role during the pandemic.

"Costs for these services can really add up for someone without insurance, depending on the treatment and care they need," he said. The program's end "will increase the disparity in access to critically needed health care and will put additional burdens on safety net providers."

Some providers have already announced that the uninsured will have to pay for Covid-19 testing now.

Quest Diagnostics, one of the nation's largest commercial labs, has started charging uninsured Americans who order tests through QuestDirect between $70 and $125, depending on the type, according to Kim Gorode, a company spokeswoman. Those who go to a doctor who orders a test through Quest Diagnostics will pay $100.

The company has received about $488 million in reimbursements for testing from the uninsured fund, according to the CDC database and confirmed by Quest.

Meanwhile, Curative, a health care startup, stopped testing those without insurance in certain states -- including Florida and Texas -- where the uninsured comprise a significant share of its patients and where it has no other reimbursement arrangements in place. It provides testing in 34 states.

Curative has received nearly $587 million in reimbursements, according to the CDC. Asked about the figure, the company said there is insufficient data on the agency's website to confirm its accuracy.

For Embry Health, the end of the reimbursement program could result in the shuttering of the vast majority of the Covid-19 testing company's 300 locations in seven states, said CEO Raymond Embry. It started to suspend operations in 60 sites in Arizona as of April 1.

About 50% of its clients are uninsured.

The company, which has received about $54 million in reimbursements from the federal program, now tests a total of around 2,200 people a day, Embry said. That's down from a height of 46,000 during the Omicron spike earlier this year.

As of Friday, the company was continuing to provide free testing to the uninsured, even though the federal program stopped accepting new claims on March 22, Embry said. But it cannot do so indefinitely.

He is concerned that it will be harder for the uninsured to get tested just as the highly contagious BA.2 subvariant of Omicron has become the dominant strain in the US.

"Patients need to feel confident to be able to get tested, and the only price that's acceptable to them is free. It has to be free," Embry said.

Though it's more difficult to find, free testing is still available for the uninsured.

CVS said that those without coverage can continue receiving Covid-19 tests or vaccinations at no cost at its pharmacies.

The chain has received $38 million for testing and $475 million for vaccines from the federal program, according to the CDC. CVS referred questions about the accuracy of the data to the Health Resources and Services Administration, which did not immediately return a request for confirmation.

Many states, municipalities and community health centers still offer testing at no charge.

For instance, New York City's Department of Health is continuing to provide free testing and vaccines for the uninsured, along with those who have coverage, at mobile sites, local clinics, city-owned hospitals and other locations. The effort is funded with money from multiple public sources, including the city, state and federal governments.

Another option for the uninsured: Ordering up to two sets of four free at-home Covid-19 tests from the federal government at Covidtests.gov.

Advocates and health care providers, however, worry that the uninsured may become more reluctant to seek medical services now that the reimbursement program is ending.

"We would definitely not want anyone who does not have coverage at this point to see this information out there about this program going away and think that they wouldn't have access to care," said Molly Smith, group vice president of policy for the American Hospital Association.