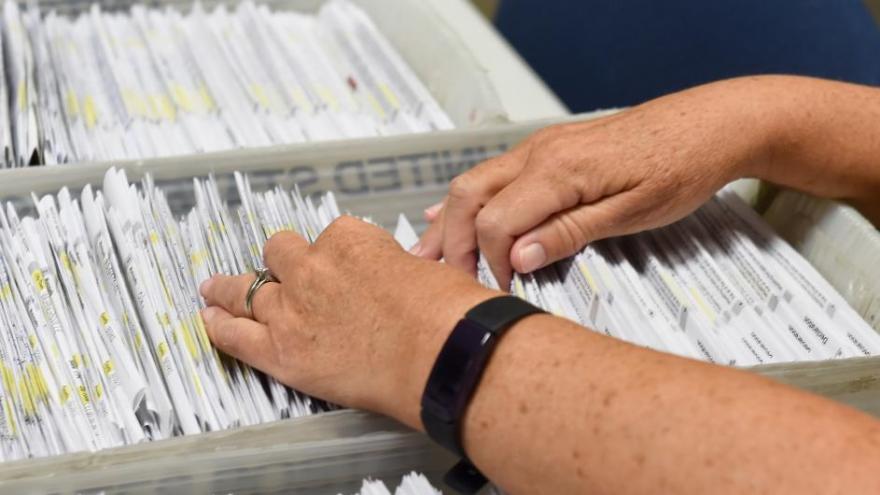 (CNN) -- When Keith Silverang went to request his absentee ballot from the local election office in the county where he was last a permanent resident in the US, he followed the same procedure he's followed when voting abroad in every general presidential election since the early 1990s.

He emailed his local election official in Bergen County, New Jersey, with the forms requesting an absentee ballot in May -- earlier than he normally would, but given the coronavirus pandemic, he wanted to be prepared.

He didn't hear back for months.

Silverang lives in Espoo, a town in Finland. He's lived abroad for 33 years. But this is the first time it's taken his local election office months to respond about his absentee ballot application. After he sent an inquiry through the Bergen County election website threatening to take legal action if they did not respond, an election official emailed back in early September confirming his application had been received and his ballot would be sent. He received his ballot via email on Saturday.

The Bergen County Clerk's Elections Division said in a statement to CNN on Saturday that it had emailed ballots to more than 2,000 military and overseas voters as of Friday, but with 600,000 voters in the county, it "would be impossible to phone call, email or send a mail receipt for every person."

Silverang is one of about 5 million Americans living abroad, about 3 million of whom are eligible to vote. There are an additional 172,000 active duty personnel serving overseas, said David Beirne, the director of the Federal Voting Assistance Program, which provides information and resources about voting to Americans abroad. Out of all of the Americans living abroad, 67.5% voted by mail in the 2018 election, according to the Election Administration and Voting Survey 2018 Comprehensive Report.

Many Americans abroad, like Silverang, are concerned that slower mail in the US, due to policy changes implemented by the new Postmaster General over the summer, and abroad could cause their ballots to arrive late and not be counted in the general election. In order to ensure their vote is counted, Silverang and other American ex-pats CNN spoke with are taking a proactive approach, reaching out to their local election officials and checking to make sure their absentee ballot requests and ballots have been received.

Julia Byran, global chair of Democrats Abroad, a Democratic National Committee affiliate that provides assistance and guidance about voting abroad to Americans living in 197 countries, said that she was concerned about absentee ballots mailed from overseas getting counted in the general election after watching some of the issues with absentee ballots mailed domestically and received too late to be counted in the primaries this year.

"It's definitely a concern of ours. The only thing we can do is try to combat that by making sure people vote early, so our biggest tagline is: November is now," Bryan said.

Because of the concerns with mail in the US and in some other countries impacted by coronavirus that have experienced mail delays, Democrats Abroad recommended that voters living outside the US fill out a Federal Write-in Absentee Ballot in August and mail it regardless of whether or not they had requested an absentee ballot. The FWAB can be sent at any time by voters living abroad. If a county election office receives the FWAB, and then a voter abroad also sends in an absentee ballot separately, the FWAB will be discarded, Bryan said.

Four years ago, 44.4% of ballots mailed from abroad were rejected because they arrived late, according to the Election Administrative and Voting Survey 2016 Comprehensive Report.

"We just started really early in the cycle, calling all of our members, getting those solutions for how we overcome these problems," Bryan said. "A lot of the challenge of voting abroad is logistics, so that's one of the things we do is think logistically."

Chris Hatfield, an American who has lived abroad in South America and Europe for six years and currently lives in Madrid, filled out his FWAB early on after he received emails from Democrats Abroad recommending he do so. He is also in contact with his local election official in Fauquier County, Virginia.

"I wrote to my local election official specifically about the emergency write-in ballot, mostly to ask if there was any way to vote not by mail, to vote by email or by fax, and she said in Virginia that's not possible," Hatfield said. "She recommended to vote as soon as possible."

In Virginia, you can check if your ballot has been received online. Hatfield has not received his ballot yet, but plans to mail it back as soon as he receives it electronically and will check online to make sure it arrives, he said.

"I'm glad that I have put myself on the Democrats Abroad listserv, and it's great that they are trying to help make it easier for people to vote, but if I wasn't then I wouldn't have sent in this emergency ballot," Hatfield said. "It shouldn't be up to a private organization or an email listerv to make sure that I'm able to vote."

In Pennsylvania, legal battles prevented the state from finalizing the state-certified ballot and sending out absentee and mail-in ballots Monday, the first day they normally would have been able to do so.

But the state allowed county officials to send ballots to overseas voters ahead of the September 19 deadline without waiting for the finalized ballot.

"The counties do not have to wait for ballot certification to begin mailing overseas ballots. Some counties have already started mailing them," Pennsylvania Secretary of State Communications Director Wanda Murren told CNN.

Andrew Griffith, a comic book artist who lives in Peru, contacted his local election office in Cumberland County, Pennsylvania, to ask if he could get an absentee ballot. They said they were sending out ballots and had been sending them as early as mid-August.

At first, Griffith was unable to mail his ballot back because the post office and printing shops in Peru were shut down due to coronavirus. Last week, Griffith was able to download his ballot, print it out and mail it back after the Peru post office opened. But given the challenges with mail in Peru and the US, Griffith is still concerned about his ballot arriving in time to be counted.

"I'm nervous about a lot with everything going on this year. I'm afraid of signature verification. I'm afraid of it not getting there in time, or getting lost in the mail," Griffith said.

Griffith called his local election office Thursday to see if they had received his ballot yet. He plans to continue calling until it is received.

"As far as patriotic responsibilities and duties go, this is about the least someone can do," Griffith said. "You can see what effect American governance can have on the world. I feel like it's something that's very important. I feel like it's the least we can do as our civic duty."

American service members stationed outside the US must also request an absentee ballot from their local election offices in order to vote while living abroad. The military has voting assistance officers stationed in every unit who are designated to help members and their families access voting resources and stay aware of upcoming deadlines.

Anthony Zinni, a retired Marine Corps general, now works with an organization called Count Every Hero, which is dedicated to helping service members abroad vote and works to ensure their votes are counted back in the US. While in the Marine Corps, Zinni voted from Germany, Japan and while deployed in Vietnam.

"We started teaching our Marines about what the Constitution is all about. If you're going to defend it, you should understand it and know what it is, and the rights you are protecting, our citizens, our way of life," Zinni said. "We want them to understand that the rights they are protecting, they should engage in and take advantage of, so part of it's an education."

Many younger members of the military may be voting for the first time while living abroad. For those newer voters, they may need extra help registering because the experience voting abroad is different from doing so back home, Zinni said.

"We want to be sure that every available assistance is provided for them to execute this right," Zinni said. "It's part of good citizenship as well as being a member of the Armed Services that defend those rights."

This story has been updated with a statement from the Bergen County Clerk's Elections Division.