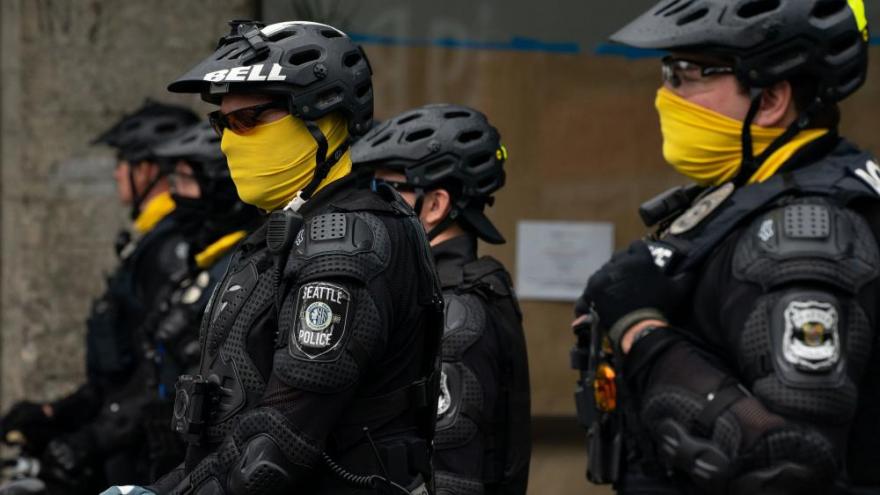 (CNN) -- Americans' confidence in police has hit a new low -- aided in large part by a growing gap between Black and White people about how much they trust officers.

Around 48% of Americans said they have a "great deal" or "quite a lot" of confidence in police, down from 53% the previous year, according to a new Gallup poll.

The poll, released Wednesday, was conducted in the weeks after George Floyd's killing in May, which mobilized thousands of protesters to march against police brutality and racism.

The results are part of Gallup's annual Confidence in Institutions poll, a bellwether for Americans' belief in the medical system, media, public schools, the presidency and more.

Gallup has polled Americans on their confidence in police for nearly 30 years. This is the lowest it's dropped since the first policing poll in 1994 (the previous high was 64% in 2004), Gallup said.

Black respondents are less likely to have confidence in police

Since Gallup began including police in its Confidence in Institutions poll in 1993, White respondents have been more likely to express confidence in police than Black respondents, per Gallup.

It's the largest gap between Black and White respondents Gallup recorded in the current poll, which questions respondents on 16 institutions.

Black Americans' trust in police hovered around the mid-30% range up until 2014 (one year afte George Zimmerman was acquitted in the killing of Trayvon Martin; the same year protests began in Ferguson, Missouri). Since then, Black respondents' trust in police has continued to sink to 30% while White respondents remained at 60%.

The new poll is just one indication that Americans' perception of policing is changing rapidly since protests began in May.

"Defunding the police" entered the wider lexicon in late spring. "Defunding" means removing funds from police departments (which often make up the bulk of a city's budget) and reinvesting those funds in social programs, education or health care.

A previous Gallup poll, published in July, indicated that Americans are on board with reform. Per the poll last month, 58% of Americans said "major changes" were necessary to improve policing, and another 36% supported "minor changes." That's overwhelming support for reform of some kind for law enforcement in the US.

A small number -- about 47% -- of respondents supported reducing police department funding, according to the poll. Support for abolishing police departments entirely, as Minneapolis lawmakers have moved to do since Floyd's death in the city, remained relatively low at 15%.