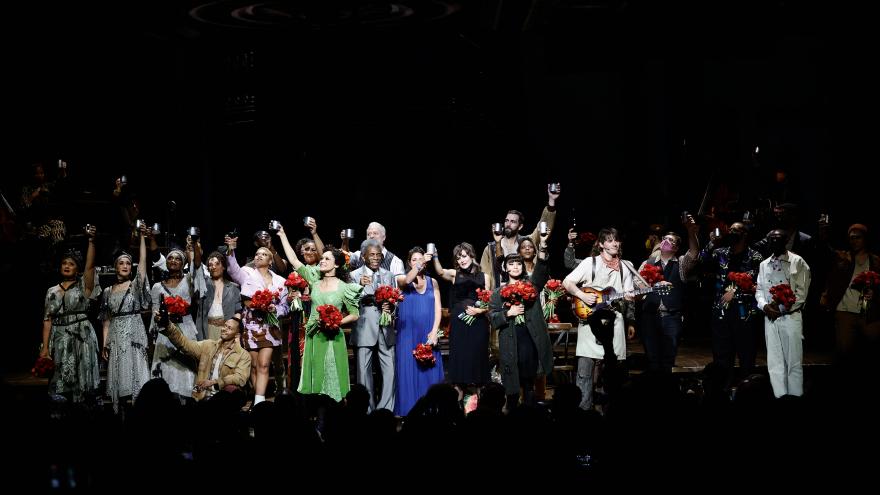 (CNN) -- Everything old is new again. Swedish supergroup ABBA has just released their first new music in 40 years, while the Swedish East India Company has brought back a ship that sank in the year 1745.

The rest of the world, though, might be wishing that travel could return to the way it was before the pandemic took hold.

Until it does, here's what you need to know about tourism industry news, international reopenings and more.

New York City has continued its road to reopening, but the big news was tempered when Hurricane Ida hit, flooding subways, streets and homes across the city.

The Great White Way is back in business, but things may not look the same as they did before: Audience members at Broadway shows like "Hadestown" and "Harry Potter and the Cursed Child" must provide proof of full vaccination and wear masks for the duration of the performance.

Many shows are opting to condense or shorten their run times to avoid having intermissions as well.

Another sign that the city is waking up? The iconic red-and-white TKTS line, where theatergoers can stand in Times Square to score last-minute Broadway and off-Broadway tickets, will reopen on September 14 at 3 p.m.

Manhattan's cruise ship terminal, which is on the Hudson River, will reopen in late September.

Norwegian Cruise Line and Crystal Cruises are reportedly vying to have the honor of being the first line to return to the New York City terminal.

3. Universal has landed in China

Universal Studios Beijing Resort doesn't open until September 20, but anticipation is already through the roof. A CNN source reports that some preview passes for the first Chinese Universal park were being scalped for hundreds of dollars.

Some of Universal's most popular attractions, like the Wizarding World of Harry Potter, Minion Land and Transformers Metrobase are here, and there's also a Kung Fu Panda Land of Awesomeness that's exclusive to the Beijing park. In addition to rides, there's a Mr. Ping's Noodle House that looks just like the one from the movies.

While China's borders are almost entirely closed to travelers, within the country tourism is mostly open.

4. CDC advises against going to Saint Lucia and Switzerland

In its latest round of travel advisories, the CDC has updated its Covid risk lists once again. Seven new destinations, including Saint Lucia, Puerto Rico and Switzerland, were added to the level four "very high risk" category.

While the designation is not a ban, the CDC advises that anyone traveling to a level four spot be fully vaccinated first.

Still, it's not all bad news: Bahrain, Indonesia, Namibia, Oman, Rwanda and Zimbabwe were all dropped from level four to level three as the virus situation improves.

And speaking of Oman...

The Gulf nation has reopened its land, air and sea borders to vaccinated travelers as of September 1. Visitors must be at least 14 days past their second dose of an approved vaccine (or the sole dose, if they got the Johnson & Johnson vaccine) and be from a country that allows Omani visas on arrival.

Travelers must register for the Tarassud+ app ahead of their trip.

Visitors who arrive with a negative Covid-19 test in hand (within the past 72 hours for short-haul flights and 96 hours for long-hauls) will not have to quarantine on arrival.

See the US State Department page for Oman for more information.

Singapore passed the milestone of vaccinating 80% of its population this week. The country has announced that it will pursue a strategy to live with Covid, instead of trying to aim for zero cases. That begins with the opening of quarantine-free travel lanes with Germany and Brunei and will likely include similar agreements with other countries in the months to come.

That's great news for Singapore's tourism industry, which has been battered by the border closure. Restaurant owners have been some of the hardest hit as local lockdowns also meant locals couldn't dine in, either.

Amid the tourism panic, Michelin released its annual guide to the Lion City's restaurants on September 1. One shocker was the news that Hawker Chan -- a longtime favorite food stall whose $2.50 chicken and noodles with soy sauce dish was widely known as the least expensive Michelin meal in the world -- lost its star ranking for the first time since the Singapore guides debuted in 2016.

As of August 9, Canada has allowed its southern neighbors to come to the Great White North by land (instead of only via air).

For Massachusetts resident Rebecca Soffer, who has two young unvaccinated children, that made a family vacation to Canada something she felt comfortable doing during the pandemic.

Their family of four crossed the US-Canada border at Buffalo, New York's Peace Bridge and then visited Toronto and Niagara Falls before returning home, an experience she documented for CNN Travel.

Still, amid the optimistic news one major question remains -- why can't Canadians drive to the US?

Although the country's respective leaders, Prime Minister Justin Trudeau and President Joe Biden, spoke on August 2 about "close collaboration in the management of the Canada-US land border," the US has yet to decide when it will open up to its northern neighbor.

8. Europe cools on US tourists

Prospects of European escapes for Americans have begun to fade with the summer. This week the EU dropped the United States from its list of safe countries and advised its member states to restrict nonessential from from the US due to a surge in Covid cases.

So far the nonbinding directive has yet to be adopted by most of Europe's major travel destinations, but Sweden and the Netherlands have both announced new limits on arrivals.

9. Will a replica 18th century ship be the new cool way to travel?

If slow travel is poised to make a post-pandemic comeback, then what's more leisurely than a seven-month sail around the globe?

The Götheborg II, a 1:1 replica of an 18th century trading ship, is now in Stockholm's harbor.

Guests can board the wooden vessel to see how a team painstakingly recreated the ship using traditional tools, but the real excitement will begin in 2022 when the Götheborg II re-traces the traditional Sweden-to-China sailing route.

Over seven months, the ship will call at ports around the world, including Lisbon, Alexandria, and Muscat (yep, there's Oman again) before completing its journey in Shanghai.

Qantas, which celebrated its centennial last year, has said it's considering restarting routes to countries like Singapore, the US, Japan, UK and Canada by December 2021.

"With Australia on track to meet the 80% (vaccine) trigger agreed by National Cabinet by the end of the year, we need to plan ahead for what is a complex restart process," Qantas CEO Alan Joyce told CNN affiliate 9 News.