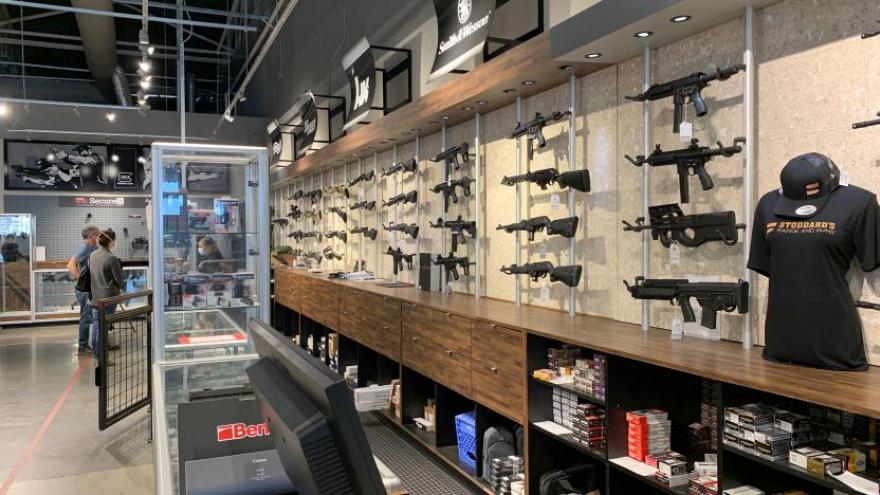 Gun sales in the United States reached a record level last year, with the biggest increases in background checks for firearms overlapping with months of social and political unrest, according to industry and government data. A variety of guns are shown inside Stoddard's Range and Guns.

(CNN) -- Gun sales in the United States reached a record level last year, with the biggest increases in background checks for firearms overlapping with months of social and political unrest, according to industry and government data.

Industry data and firearms background checks show nearly 23 million guns were purchased in 2020, according to Small Arms Analytics, a consulting firm based in Greenville, South Carolina.

That's a 65% increase compared with 2019, when 13.9 million guns were sold, according to Small Arms Analytics.

Since there is no national gun registry, firearms industry publications and background checks are the best sources for gauging sales.

And the political uncertainty after the presidential election overlapped with a jump in gun background checks in November, at 3.6 million, and December at 3.9 million. That compares to 2.6 million in November 2019 and 2.9 million in December 2019.

The jump in gun sales also continued into 2021. In January, as rioters stormed the US Capitol and a new administration took office, the FBI was swamped with 4.3 million requests for background checks -- up from 2.7 million requests last January. Those checks are initiated by gun sellers.

The requests for background checks slowed to 3.4 million in February, but that's still up 23% from February 2020.

There were also striking increases at the state level:

--A record number of Georgia residents got firearm background checks in 2020:

--In Michigan, January background checks increased 155% from the previous January.

--New Jersey saw a January over January increase of 240%.

At gun stores and gun ranges business is booming.

Atlanta resident Syra Arzu, 38, wanted to buy a Glock pistol. But the store was completely sold out, so she settled on a Smith & Wesson.

The single mother of three young children says she never felt the need for a gun, until now.

"It just seems like we live in chaos and this is giving me some kind of control over that chaos," Arzu said.

Once Arzu got hers, her friend was convinced to purchase one of her own. And another friend who accompanied Arzu to the gun store picked up his new gun last week.

"We see a lot of women come in, a lot of couples, people with children," he said. "We're really seeing pretty much every walk of life."

Philip Smith, founder of National African American Gun Association (NAAGA), says many of those buying guns today are people who five years ago would never have imagined they'd own a firearm. Covid-19, he says, was the game changer.

"That was something that had people, regardless of color, regardless of your social background, your economic status, you said to yourself, 'OK if we don't have food next week, what are we going to do to protect ourselves and our families?'"

NAAGA is seeing steady growth of about 800 to 1,000 new members a month, Smith said.

It's not unusual for gun sales to spike when a Democrat wins the White House. The election and reelection of Barack Obama in 2008 and 2012 were both followed by gun sale surges.

The previous record of 15.7 million guns sold in a calendar year was set in 2016, when many gun aficionados feared former Secretary of State Hillary Clinton would win the White House.

Dabney Evans is worried about numbers of a different kind: homicides, suicides and injuries. An associate professor of global health at Emory University, she says studies show that more guns mean more deaths and injuries resulting from them.

Evans says if people want to arm themselves, these days the best way would be to wear a mask, wash your hands and get a vaccine.

Arzu already follows that advice, but still feels better with a gun in her home, which she keeps locked in a safe.