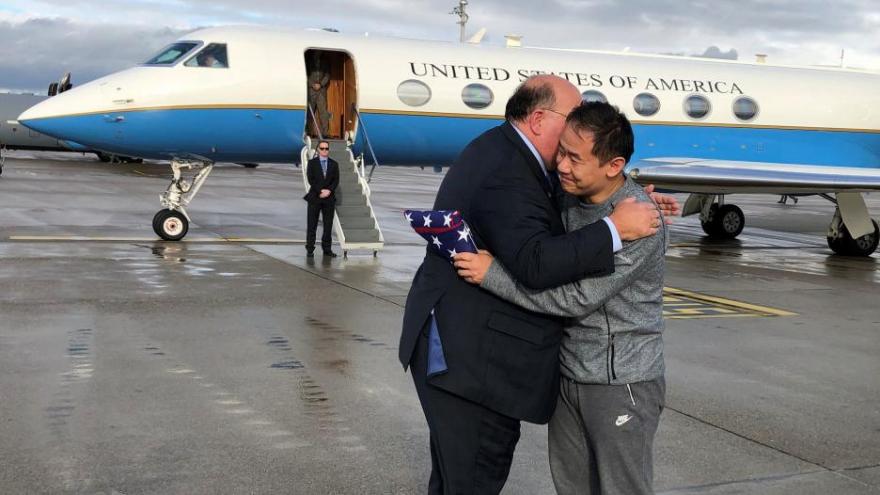 The US Embassy in Switzerland tweeted this photo with the caption, "Amb. McMullen was honored to present the American flag to freed U.S. prisoner Xiyue Wang, who has been held on false charges in Iran for 3 years."

(CNN) -- An American graduate student, who had been held for three years in Iran on suspicion of being a spy, is in "good spirits" after being freed from Iranian custody, a senior administration official said Saturday.

Chinese-born Xiyue Wang is in "good health," "very, very good humor" and "good spirits" and will take a "brief break in Germany," the official said, before they expect him to soon return home. Wang on Saturday arrived in Germany and is undergoing a medical evaluation at the US Army-operated Landstuhl Regional Medical Center in Germany, a frequent stop for recently released Americans who had been held in overseas prisons, for an indeterminate period of time, a separate US official told CNN.

Wang, a Princeton University PhD student, was conducting research in Tehran when he was arrested there on espionage charges in August 2016. He was sent to Iran's notorious Evin Prison and sentenced to 10 years.

Iran released Wang in a prisoner swap between the two countries, with the US freeing Iranian scientist Massoud Soleimani. US law enforcement arrested the Iranian stem cell scientist in fall 2018 upon his landing in Chicago, according to Iran's state-run Press TV.

The senior administration official told reporters Saturday that the Justice Department dropped charges against Soleimani, who was due in court next week, but would not provide additional details on how that happened or why. Soleimani had been found guilty of conspiring and attempting to export biological matters in reference to human growth hormone.

Earlier Saturday, Iran's Foreign Minister Javad Zarif tweeted a photo of himself accompanying Soleimani home on an Iranian plane. Zarif said Soleimani and Wang would be "joining their families shortly."

The White House announced Wang's release in a statement that thanked the Swiss for their assistance in negotiating with Iran. Because the US and Iran do not have diplomatic relations, the Swiss government had provided consular services to Wang and reported back to the State Department.

"Freeing Americans held captive is of vital importance to my Administration, and we will continue to work hard to bring home all our citizens wrongfully held captive overseas," President Donald Trump said in a statement.

Wang was flown on a Swiss government airplane to Zurich from Iran, a different source familiar with the matter confirmed to CNN. Brian Hook, the State Department's special representative for Iran, met him in Zurich, the source confirmed.

The New York Times first reported the details of the Zurich arrival.

The senior administration official described the swap as "a very good deal for the US" and said the Trump administration "is hopeful this will lead to further success with Iran."

"We feel very good about the role in resolving the charges against Mr. Soleimani and the reciprocal humanitarian gesture to release" Wang, the official said.

'He was simply a scholar'

Wang was born in 1980 in Beijing and immigrated in 2001 to the US, where he became a naturalized citizen in 2009. Wang's wife, Hua Qu, and his young son, Shaofan, are Chinese citizens.

Wang is a student of late 19th and early 20th century Eurasian history, according to Princeton University. With funding from the university, he went to Iran to study Farsi and conduct scholarly research for his dissertation. Before traveling to Iran, he laid out his research plan in letters to the Pakistani Embassy in Washington, DC, which issued his visa.

"He was not involved in any political activities or social activism; he was simply a scholar trying to gain access to materials he needed for his dissertation," the university said.

Iran accused Wang of being "sent" by Princeton to "infiltrate" the country, charges which the university says are "completely false."

In 2018, a United Nations panel on arbitrary detention said that there was no legal basis for Wang's arrest and imprisonment, and called for his immediate release.

In August, three years after he was imprisoned, Wang's wife, Hua Qu, issued a plea for Trump and the international community to help free her husband.

"My husband is an academic researcher. He's a father, husband. He is not a political figure and he is definitely not a spy," Qu said at at the National Press Club in Washington, adding that she felt Wang was being used as a "bargaining chip" in a "geopolitical dispute" between the US and Iran.

While Qu said at the time that she was in regular contact with the State Department, including Special Presidential Envoy for Hostage Affairs Robert O'Brien, she was looking for the administration to do more. She referenced the fact that Trump had dispatched O'Brien to Sweden on behalf of A$AP Rocky, noting that the arrested rapper "quickly got released."

On Saturday, Qu celebrated her husband's release, saying in a statement: "Our family is complete once again. Our son Shaofan and I have waited three long years for this day and it's hard to express in words how excited we are to be reunited with Xiyue."

After news of Wang's release broke, Secretary of State Mike Pompeo wrote on Twitter Saturday that the US would "not rest until we bring every American detained in Iran and around the world back home to their loved ones."

It was not clear as of Saturday morning if Wang will make a visit to the White House.

"Mr. Wang is focused on making sure that he's in good health and being reunited with his family. That's what Mr. Wang wants, and that's what we want for him, what the President wants for him," the senior administration official said. He added that nothing is scheduled at this time.

The official said he hoped that other families of Americans being held around the world will see the release as a "hopeful sign."

"In almost every hostage return I've received, and it just goes to show the high character of these families and how they stick together, just about every time we've had somebody return where it's been public I've received emails from other hostage families congratulating us on getting that hostage home, and saying that it gives them hope for their family members," he said.

"They can rest assured that the team that is working to bring these Americans home is already, as we celebrate Mr. Wang's return that they're already turning to the remaining cases and rolling up their sleeves to make sure we can try and have some other victories for these families."

The family of former FBI agent Robert Levison, who went missing in Iran more than a decade ago, said in a statement on Saturday that they "welcome the release of Xiyue Wang and send our best wishes to him, his wife, Hua Wu and their young son, who will finally get to see his father again," but called the news "bittersweet for our family."

"We can't help but be extremely disappointed that, despite all its efforts, the United States government was unable to secure his release, especially after such a painful week for our family," the family said. They continued later: "Iranian authorities continue to play a cruel game with our father's life, and with our family. But the world knows the truth, and Iranian leadership must come clean. It is time for Iran to send Bob Levinson home, so he can live the rest of his life in peace. We look forward to when that day will come."