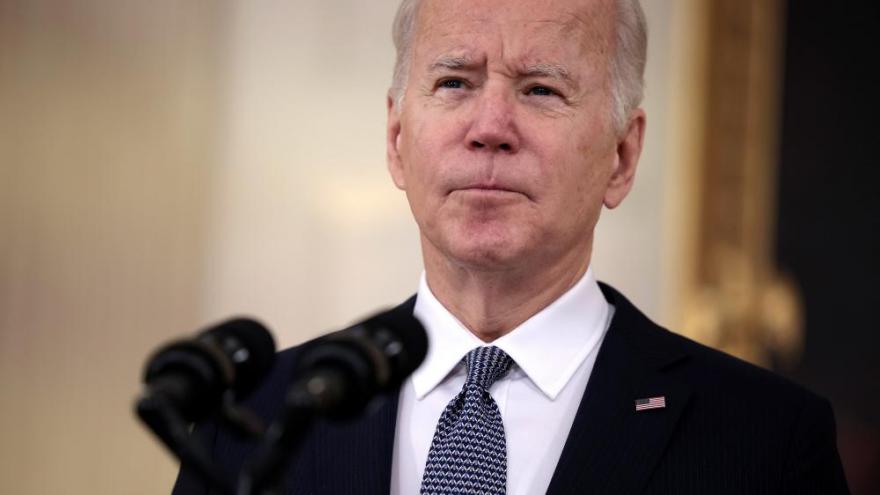 American news outlets will briefly pull away from around-the-clock coverage of Ukraine when President Biden delivers his first State of the Union address on Tuesday.

Conventional wisdom would suggest that Americans care more about close-to-home pocketbook issues than foreign wars. But the current state of play seems to be more complicated. CNN released new polling on Monday showing that "broad majorities of the public say they are paying attention to the situation in Ukraine (79% following at least somewhat closely) and that they are worried about the conflict leading to broader war in Europe (80% very or somewhat worried), leading to Russian attacks elsewhere (77%) or threatening U.S. national security (72%)."

So there is a lot of surface-level interest. But some news consumers are more invested than others. In the CNN poll, 31% of respondents said they were following Russia-Ukraine news very closely; 48% said somewhat closely; 18% said not too closely, and 3% said not closely at all.

Personally, I have been glued to the TV and digital coverage of the crisis, and so have most of the people who will choose to watch an hour-plus State of the Union speech. But I thought this data was a good gut check about the different types of audiences for news.

Biden speech consumers will expect to hear about Ukraine, but also about the state of "our" union. "Biden is still expected to tout his major accomplishments: the nomination of the first Black woman to the Supreme Court, the prospect of a return to normalcy as Covid-19 cases wane and the passage of his first two major legislative priorities in his first year in office," CNN's Kevin Liptak, Maegan Vazquez and Jeremy Diamond reported Monday.

CNN's story notes that "Tuesday's remarks will look different from the last speech Biden gave in the House chamber, when he spoke in front of a masked Vice President Kamala Harris and House Speaker Nancy Pelosi. There were a limited number of attendees, who all wore masks and sat socially distanced." On Monday, Congress lifted its mask requirement, and similar rules are being relaxed in multiple states. So the SOTU will be a visual demonstration of progress in the evolution of the pandemic.

A rare Biden address in prime

Oliver Darcy writes: "One notable aspect of Biden's SOTU speech: It will be one of the rare moments that the president addresses the nation in prime time. Unlike some of his predecessors, Biden seems to shy away from prime time speeches, choosing instead to talk to the nation during the afternoon hours. This will be a break from that."

So what is the state of our union?

The Associated Press' Calvin Woodward and Zeke Miller answered this way: "The state of the union is disunity. It's a state of exhaustion from the pandemic. It's about feeling gouged at the grocery store and gas pump... Today's national psyche is one of fatigue and frustration — the malaise of our time. But the divides run deeper and solutions may be more elusive than the energy crisis, inflation and sense of drift of that time."

No doubt Biden will tell a more optimistic story on Tuesday night. USA Today columnist Jill Lawrence tried writing an intro for him: "My fellow Americans, the state of the union is resilient. We are a fortunate nation, lucky in our geography, our human and natural resources, our neighbors and allies, and in our founding values. So snap out of it."

Snap out of it! Her point: "It's time for tough love," some "fire and resolve."

Do these speeches even matter?

Former Barack Obama speechwriter Jon Favreau says not so much. "I think the significance of the State of the Union has declined precipitously over the years," he told me on Sunday's "Reliable Sources." "I mean, it's just not the way that people consume information anymore, people don't watch hour long speeches so you've seen the audience for the State of the Union go down, but it's also just the way people consume information these days." While I largely agree -— Nielsen estimated that about 27 million watched Biden's joint address to Congress last April in a nation of 250+ million adults — I would note the following: Prime time speeches are attention magnets and agenda setters and opportunities for viral moments. People who don't watch live or in full still pick up bits and pieces hours and days later. So the message does still matter.

-- "So the challenge for the president right now isn't unifying around support for Ukraine or opposition to Russia's actions," Amy Walter said on the "NewsHour" Monday night. "The challenge right now is for Americans to see the president himself as a leader," especially on the economy. (PBS)

-- The GOP response to SOTU will come from Iowa Gov. Kim Reynolds. Democratic Rep. Rashida Tlaib will also deliver her own response, "on behalf of the independent Working Families Party," which is stirring criticism from centrist Democrats. (USA Today)