American firefighters arrive in Australia and get cheered at the airport 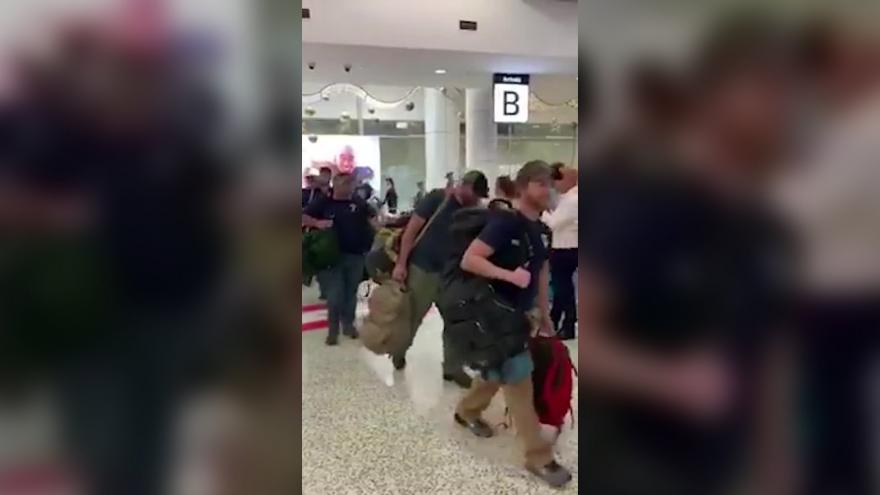 (CNN) -- American firefighters got a hero's welcome when they arrived in Australia to help battle the country's devastating fires.

Travelers at Sydney's international airport cheered and clapped Wednesday as the group, with members from across the United States, walked by. Commissioner Shane Fitzsimmons of the New South Wales Rural Fire Service posted video of the scene on social media.

Sean Snyder, of Alabama, was part of the group. His wife, Autumn Snyder, was "very humbled" by the response, she told CNN.

"It's so refreshing and gratifying to see them be welcomed and appreciated," she said.

Sean Snyder, an assistant fire management officer for the US Forest Service in Talladega, Alabama, volunteered for the assignment, which will last at least 30 days, his wife said.

Snyder was excited to have been chosen, his wife said, even though it will be challenging for them and their three children.

"We are a public service family and believe in doing all the good we can," Autumn Snyder said. "We are super proud of the work he is doing over there."

Australia and New Zealand have been sending firefighters to the United States for more than 15 years, the Forest Service says. The most recent example was in August 2018, when 138 arrived, a federal spokeswoman said. The last time US firefighters worked in Australia was 2010.

Australia's fires have been going for months and have burned more than 7.3 million hectares (17.9 million acres) across its six states -- an area larger than the countries of Belgium and Denmark combined. The fires are blamed for 27 deaths.