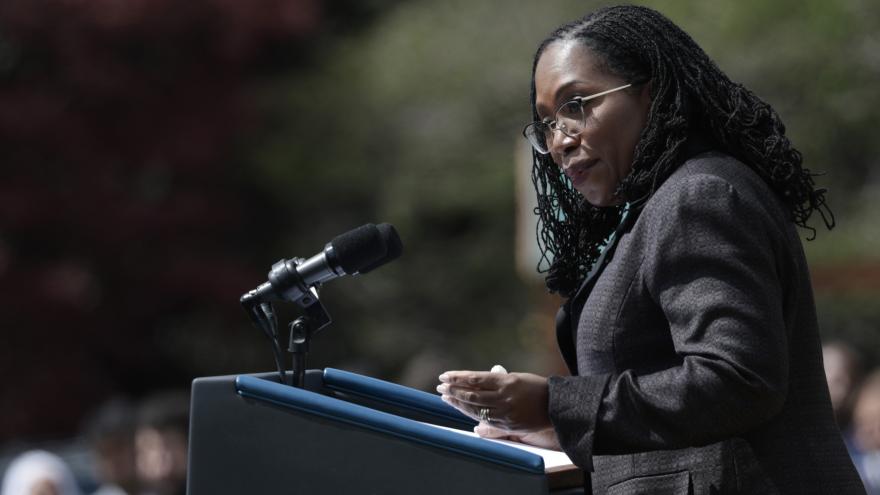 (CNN) -- The Senate Republicans who led the attacks on Judge Ketanji Brown Jackson's sentencing record say they hoped to send a message to other trial judges who might seek appointments to higher courts.

While some veteran judges see it as a tactic of intimidation, it hits on a longstanding tension between the lifetime tenure granted to judges to in theory shield them from politics and lawmakers' frustration that they're using that discretion to supposedly stretch beyond the instructions they've received from Congress.

"One of the most important consequences of these confirmation hearings is there are district judges across the country who may have ambitions for elevations, who are going to think twice about letting violent criminals go or giving them a slap on the wrist, rather than following the law and imposing serious sentences for those who have committed serious crimes," Sen. Ted Cruz, a Texas Republican, told CNN.

The allegations about her sentencing record did not derail Jackson's confirmation, which the Senate approved Thursday with three Republicans joining Democrats. But the longer-term ramifications -- both in 2022 campaign politics and the judicial confirmation fights farther into the future -- remain to be seen.

"It is in part meant to intimidate judges," said Ret. Judge Shira Scheindlin, who joined several other retired judges in a letter last month defending Jackson's approach to the child pornography cases that had been singled out by GOP lawmakers.

"They are kind of on notice that, if that's their ambition, they better think hard about their sentencing practices," Scheindlin, a Bill Clinton appointee, told CNN. "That's a bad thing."

The at-times misleading critiques of some of Jackson's sentences come as "soft on crime" rhetoric has become of focal point of Republicans' midterm messaging -- a revival of sorts of the criminal justice politics of the 1980s and 1990s, when lawmakers also pushed on the judiciary to adopt tougher sentencing practices.

And it is a tradition of Supreme Court confirmation hearings for a nominee's individual opinions to be picked apart by senators for political gain, and with the hopes of delivering a warning shot towards the judiciary.

Still, some former judges and other legal experts see the focus on Jackson's sentencings -- where many of the facts the judge was considering for her rulings remain confidential -- as a type of scrutiny that goes beyond what judges with higher aspirations have come to expect, though there is some disagreement that the attacks will impact ambitious judges' sentencing practices going forward.

"Unless you are sitting in that chair and have all that information, it's hard to second guess it," said Ret. Judge Thomas Vanaskie, who was appointed to his former district and appellate roles by Democratic presidents.

'They ought to think very carefully about sentences'

Republicans pilloried Jackson for her leniency in a variety of criminal cases, but their sharpest critiques were for her handling of non-production child pornography cases (where the offender did not produce the materials). To reject the GOP claims, the White House has pointed out that several Republican-appointed judges, including appointees of former President Donald Trump, have followed an approach similar to Jackson's in child pornography cases.

Biden on Friday decried the "verbal abuse, the anger, the constant interruptions, the most vile, baseless assertions and accusations" Jackson faced in the confirmation proceedings.

In nearly two-thirds of the kind of cases in question, judges nationwide in 2019 handed down sentences below what's suggested in the US Sentencing Guidelines, i.e. the formula grounded in statute that provides a starting point of a judge's sentencing considerations -- the practice that Republicans have blasted Jackson for adopting.

"I think it's terrible for public perception for the senators to be suggesting that there are judges around the country who favor child pornography," said Ret. Judge John Martin, who served as a US Attorney under Presidents JimmyCarter and RonaldReagan before his appointment by President George H.W. Bush to Manhattan's federal court.

The focus on child pornography reflects not just the political resonance of the attacks, as some Democrats have alleged that Republicans are dog whistling at the QAnon fever dreams of their far-right base. It also stems from the reality that these types of cases are where judges are the most likely to take advantage of the discretion they have, under a 2005 Supreme Court ruling, to ignore Congress' guidelines.

As Jackson explained repeatedly through the hearing, the decades-old guidelines have been viewed widely among judges as out of date, in part for how they don't account for technological advances.

The defense prompted some Republicans to direct their critiques at the judiciary writ large.

South Carolina Sen. Lindsey Graham cautioned, ahead of Jackson's Senate Judiciary Committee vote, that other judges that hold that philosophy were going "run into a problem with me" if they were before the committee for a promotion.

Missouri Sen. Josh Hawley also told CNN that trial court judges "ought to think very carefully about when they depart from the guidelines,"

"They ought to think very carefully about sentences that prosecutors are recommending. They ought to be tough on child sex offenders -- all criminals, but children are the most vulnerable," Hawley said.

Whether judges will change their approach out of fear they too may someday face the hostility Jackson was subjected to remains to be seen.

"People in the legal profession saw it for what it was, and it wasn't a real argument based in fact," said Lisa Cylar Barrett, the director of policy at the NAACP Legal Defense & Educational Fund.

Judges take it seriously, Ret. Clinton-appointed Judge Faith Hochberg told CNN, that their job requires them "to set politics aside and apply the facts and the law to every single case that comes before them, without any overlay of what may be made of the decision politically by someone else who wasn't privy to the facts and the law that the judge was presented."

Still other former judges acknowledged it could have a conscious or subconscious effect.

"I don't think judges are going to be too intimidated, but for those few who have the ambition to go to a higher court, they may think twice about leniency," Scheindlin said. "That's unfortunate. They should only be thinking about the defendant in front of them."

She and others stressed the Supreme Court nominations come up only a few times in every generation. Even appellate appointments are sparsely doled out among the judiciary -- meaning that the vast majority of trial judges may not even have such aspirations on their radar.

Jackson's tenure on the US Sentencing Commission, furthermore, required her to wade into contentious policy debates about sentencing practices -- including the child pornography guidelines, which in turn provided more fodder on the topic for Republicans to exploit.

Ret. Judge Mark W. Bennett recalled writing opinions expressing his policy disagreements with the sentencing guidelines for all sorts of offenses. But, because he loved his job as a trial court judge, he said he never desired an elevation to a higher court.

"I probably would have made the same decision in the case, but not publish an opinion criticizing the guideline on policy grounds if in fact I had any desire to be elevated," Bennett, a Clinton appointee, said.

Responding with 'one arm tied behind her back'

Jackson's allies were anticipating that her experience as a public defender could be exploited for a Republican "soft on crime" attack.

In the decades that followed, Congress continued to criticize what lawmakers saw as judicial leniency, according to Ohio State University Moritz College of Law professor Doug Berman, who founded the Sentencing Law and Policy blog. Berman said that the congressional attention of the era was typically focused on legislative efforts to curb the leeway judges had in sentencing.

That this familiar strategy was carried out using Jackson's sentencing record was particularly troubling to some former judges and other legal experts. They see it as separate as the scrutiny high-profile nominees receive for the legal opinions they issue in civil or criminal cases, where usually, all the arguments the judge was considering are publicly available for observers to look at to assess his or her reasoning.

"Part of what made the attacks on Judge Jackson's sentencing decisions unfair is that she could not respond to the attacks by resort to the facts that supported her decisions, because those facts are maintained confidentially, for good reason," former Court of Appeals Judge J. Michael Luttig, who is highly regarded in conservative legal circles, told CNN in an email. "So, in responding, she metaphorically had one arm tied behind her back -- and the senators of course knew that."

It's rare for a current or former trial judge to receive a Supreme Court nomination, in part because of the preference for confirming younger nominees who will sit on the high bench for decades. And the rarity of Jackson's kind of ascent may limit the impact the proceedings have on other judges.

"It can't help but influence the atmosphere in which judges do their work," said Berman, the Ohio State law professor. But how much of an impact it has will depend on whether the attack was a one-off, he said, stemming from how Jackson's professional background and larger political environment aligned.