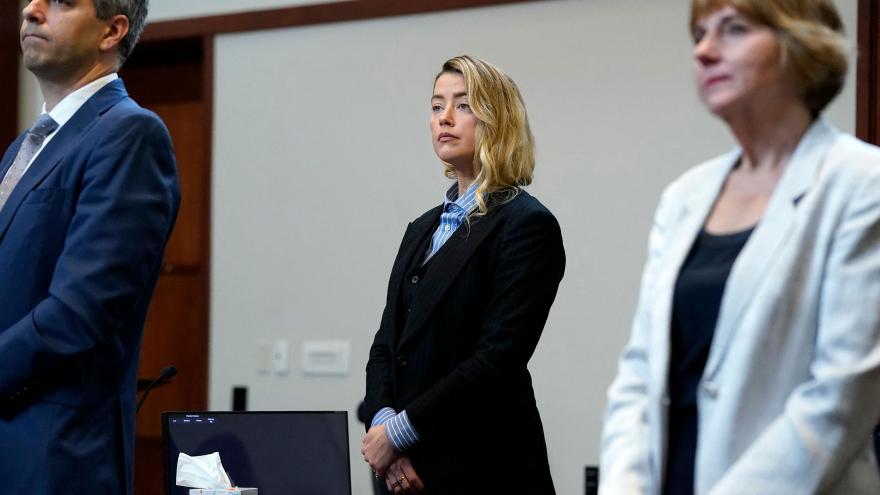 (CNN) -- Amber Heard has taken the stand in her defense against a $50 million defamation claim brought by her ex-husband, Johnny Depp.

"I struggle to find the words to describe how painful this is. This is horrible for me to sit here for weeks and relieve everything," Heard said during the start of her testimony.

Depp is suing Heard for $50 million over a 2018 op-ed she wrote for The Washington Post in which she described herself as a "public figure representing domestic abuse." Though Depp was not named in the article, he claims it cost him lucrative acting roles.

Heard's testimony comes 14 days into the trial, after weeks of jurors hearing testimony about the explosive relationship between the actors, including from Depp himself, who testified over the course of multiple days that he never struck a woman in his life and accused Heard of abuse.

Heard and Depp, who met in 2009 and were married from 2015-2016, accuse the other of acts of physical violence during their relationship. They have both denied the other's claims.

Attorneys for Depp rested their case on Tuesday.

The first witness called by the defense was forensic psychologist Dawn Hughes, who testified that she believed Heard has post-traumatic stress disorder as a result of intimate partner violence perpetrated by Depp.

"What these tests show is that there was a high degree of serious violence perpetrated by Mr. Depp toward Ms. Heard. There was violence more on the mild level perpetrated by Ms. Heard toward Mr. Depp with one severe indicator which was the punching that she indicated to me," Hughes testified on Tuesday. "She was subjected to sexual violence where Mr. Depp, based on her report, was subjected to none."

On Wednesday, Depp's attorney Wayne Dennison played a recording of a conversation between Heard and Depp.

"I was hitting you, I was not punching you," Heard's voice was heard saying in the recording.

"Don't tell me what it feels like to be punched," Depp's voice was heard saying in the recording.

Dennison asked Hughes if she felt the situation captured in that recording was Heard fighting back reactively.

"In this instance, if true, if she said she hit him first, then that would not be reactive violence," Hughes said.

Dennison pressed Hughes on her assessment that violence perpetuated by Heard against Depp was "mild," showing a graphic photo of Depp's partially severed finger, an injury Depp said he sustained after Heard allegedly threw a glass bottle at him.

"That photograph doesn't reflect a low level of violence, does it?" Dennison asked.