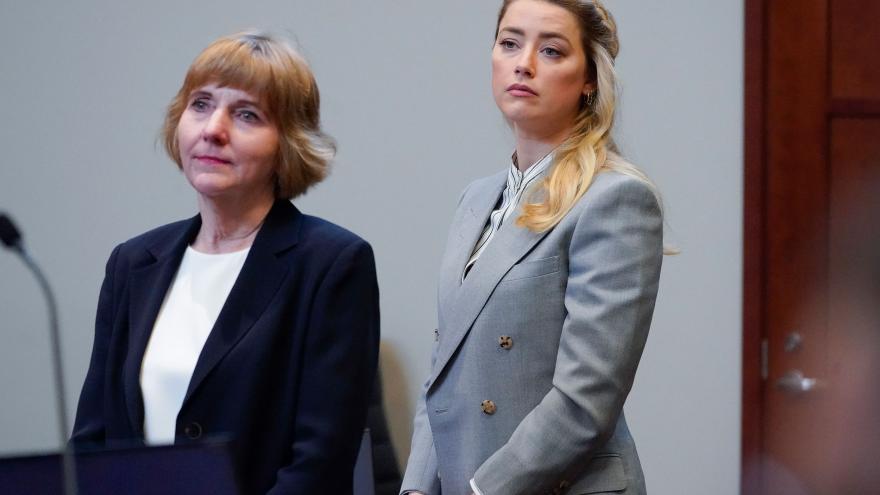 (CNN) -- The lawyer for Amber Heard says she believes the jury in the defamation case brought against the actress by her ex-husband Johnny Depp was "confused," and Heard plans to appeal the verdict.

Both Heard and Depp were found liable for defamation Wednesday in dueling lawsuits against each other. The jury, however, awarded significantly more damages to Depp.

Appearing on "Today," Heard's attorney, Elaine Charlson Bredehoft, said "an enormous amount of evidence" that would have helped Heard's case was suppressed during the trial.

"That's because she was demonized here," Bredehoft said of the verdict. "A number of things were allowed in this court that should not have been allowed, and it caused the jury to be confused."

In a subsequent interview with CNN's Kate Bouldan, Bredehoft said the jury ruled in Depp's favor on each of his claims, in part, because he had the advantages of "wealth, power and fame."

"I think that made a huge difference in this case. But it also said we're not going to believe women even when they have photos," she said. "Basically, unless she had pulled out her phone, her iPhone and videotaped him as he was beating her, she's not going to be believed, it didn't happen."

Depp sued Heard for $50 million as he alleges that she defamed him with a 2018 Washington Post op-ed in which she wrote about her experience with domestic violence.

Depp was not referred to by name in Heard's piece, but he argued it cost him work.

She countersued him for $100 million over statements Depp's attorney made in which he called her abuse claims a "hoax."

The jury found that Heard defamed Depp in three separate statements in the op-ed, and that Depp defamed Heard with one statement by his attorney.

CNN also requested an interview with an attorney for Depp but they declined.

Depp said in a statement shortly after the verdict that the jury gave him his life back.

"From the very beginning, the goal of bringing this case was to reveal the truth, regardless of the outcome. Speaking the truth was something that I owed to my children and to all those who have remained steadfast in their support of me," Depp's statement read. "I feel at peace knowing I have finally accomplished that."

Bredehoft told CNN she felt the combination of cameras and the number of Depp fans who came to the courthouse for the former couple's defamation trial turned the courtroom into something that "was like a coliseum."

"I think some of it had to do with the amount of social media that was involved, the cameras in the courtroom," Bredehoft said. "The fact that they had 100 Depp fans in there every day, it was like coliseum as opposed to a dignified courtroom. I think all of those things had a negative influence here that caused this to be much more challenging and much more difficult."

Bredehoft also said that, while she has no doubt that the jurors in the trial tried to adhere to the judge's instructions not to read any news about the trial, she felt it would have been difficult to block out all of the places where discussions about the six week-long trial were taking place.

"But reality is social media is everywhere, it was all over the TVs the radios, the internet, everywhere. It was really hard to block that out. And since it was so vitriolic to Amber I think it made it a lot more difficult," Bredehoft said.

Bredehoft said Heard's appeal will partly focus on highlighting the information Heard was not allowed to testify about during the trial that Depp's team objected to as hearsay.